It takes four hours to reach Nkongolo Moshi by jeep from Kananga, the capital of Kasai Central province, which is only 50 kilometres away. But finally we arrived in this village of huts and small houses. The few houses with metal roofs are either those of the region’s dignitaries or churches. Nkongolo Moshi is a group of about ten villages, located along the highway connecting the Congolese capital Kinshasa to the province of Katanga, passing through Kananga and Mbuji Mayi. The main activity of the local population is agriculture. When they are no longer students, the young people of Nkongolo Moshi become bicycle messengers or motorcycle cab drivers. In the centre of town there are Catholic and Revivalist churches, and every Thursday there is a market.

Delegations from the Kananga military court and the organizations that finance its work arrived on Tuesday, March 9. Nsumbu’s trial was scheduled to begin here the next day before this tribunal sitting in a mobile courtroom. This is an “educational and dissuasive” approach, according to a member of the court, which aims to prevent other criminal acts in the localities concerned. This approach also facilitates the appearance of the victims. The choice of Nkongolo Moshi was dictated by issues of accessibility and security, according to various parties involved in the organization of the trial.

On this unusual Wednesday, local authorities suspended work to allow the population to attend the trial. Four years after the serious violence that bloodied Kasai, the event is unprecedented. It is the first war crimes trial to be held in the region. 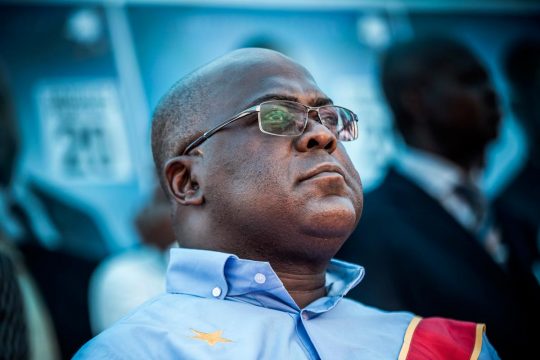 There have been several postponements in the last months, owing notably to the “procedural requirements” of donors, according to a representative of the UN Development Programme (UNDP). The UNDP is providing the logistics of this “mobile court”, as well as covering costs of the court, the defendant and his two lawyers. The Swiss NGO TRIAL International is assisting the victims and their four lawyers.

But on March 10, at noon sharp, the trial finally opened. And there was the man the victims call the “warlord”. Nsumbu Katende Laurent, 44, is a small, light-skinned man, married with 10 children, apparently calm despite being handcuffed and guarded by five well-armed soldiers. He claims to have attended the first four years of elementary school, and to have been head of the Katende Bakua Buisha grouping since 2004.

Nsumbu has been in prison since January 2018. He is charged with war crimes, terrorism, insurrection and criminal association for murders, beheadings, looting, burning of houses and other inhumane acts between February 20 and 27, 2017 during the so-called ”Kamwina Nsapu” conflict, named after a royal family that also gave its name to a rebellion that shook the Kasai region between 2016 and 2017. Nsumbu faces 232 victims. They include 35 “priority” victims who directly witnessed the alleged acts, among whom are ten women and five young people.

The defendant denies all the allegations and claims this is a conspiracy against him. “When we learned that the militiamen were coming, we all fled into the forest,” he told the court. “The one who was leading the Kamwina Nsapu elements is called Mulamba Langue.” His lawyers then requested that this person be brought before the court. However, the court quickly rejected the request, noting that this was the first time Nsumbu had mentioned this name.

Kande Kabue, age around 30, was the first of the “priority” victims to come forward. He is the biological son of the Sha Tshikumba group’s chief, whose murder Nsumbu is accused of. “It was Wednesday, February 20, 2017. We saw Nsumbu come with his gang, calling for the installation of an initiation house [place of initiations] in our government. My father refused. A few moments later, Nsumbu gave the order to kill my father. His men took my father to Nsumbu’s house and killed him with a machete. First they cut off his genitals before my eyes. Powerless to react, I was beaten with machetes. Here are my scars. They buried my father in front of Nsumbu’s plot. They burned down nearly 250 houses and looted all the livestock, under the orders of Nsumbu.” Kande, close to tears, said he never wanted to see Nsumbu free.

Eight “priority” victims out of 35 took the stand on the first day of the trial. They all accused Nsumbu of having committed international crimes in the localities of Lusala, Lungole, Tshilombo, Tshingana and Sha Tshikumba. The accused denied all these allegations. On the second day, 20 more victims came to add their evidence against him. “It’s a conspiracy,” maintained Nsumbu, who did not present any witnesses in his defence.

The court is in a race against time, as it is scheduled to conclude this trial on March 16. After hearing the priority victims it also looked at the statements of 200 other victims, and on Saturday heard the closing arguments of the parties.

The hearings took place in front of the local Catholic monastery, which was going through building work. Only the judges sat on the small veranda. The lawyers and dozens of inhabitants who had come to hear the trial were all under tarpaulins. At 10 am, the president of the military tribunal announced the resumption of proceedings. “We are asking for reparation for the harm suffered, and for the defendant to be sentenced according to the law,” pleaded the lawyers for the 232 victims. One of them spoke of the Congolese state’s failure to protect its population and said it should also be condemned. The prosecutor called for Nsumbu to be convicted as the author or co-author of the crimes. (The death penalty has not been applied in the DRC since 2003, although there are approximately 500 people on death row). The defence is asking for an acquittal for lack of evidence.

The court then had two days to deliberate. Barring any unforeseen circumstances, it will hand down its verdict as announced, on March 16.