On March 9, in Bohdanivka village in Brovary District of Kyiv region, Russian serviceman Mikhail Romanov broke into a private residence, according to Ukraine’s Office of the Prosecutor’s indictment. After opening the entrance gate Romanov faced a civilian who was not partaking in combat actions, didn’t have a weapon, and didn’t pose a threat to the Russian soldiers who had invaded Ukraine on February 24.

According to the surviving victim, Romanov was not alone. He was with another younger soldier in his 20s, who is yet to be identified. "The younger man put a weapon to his head and said: 'I’ll shot your husband because he's a Nazi,'" the woman who survived the alleged attack told London’s newspaper The Times in an article published late March. She said Romanov killed her husband with his side arm. Then the two Russian soldiers allegedly proceeded to rape her. Information about this is provided in a submission by Ukraine’s Office of the Prosecutor. They allegedly forced the woman to undress and raped her one by one. About an hour later, the soldiers returned and raped the woman again. And after 40 minutes, they returned for the third time in a state of alcohol intoxication and once again they mocked the woman.

The victim contacted the Ukrainian police and reported about the crimes. She would have recognized Romanov from a picture.

Is the accused dead or alive?

On 30 May 2022, the trial of Romanov was referred to the Solomianskyi District Court, in Kyiv. Romanov has been described as a serviceman of the 239th Regiment of the 90th Guards Tank Vitebsk-Novgorod Twice Red Banner Division of the Armed Forces of the Russian Federation. This is the first trial for rape as a war crime in relation to Russia’s invasion of Ukraine. But the accused is not in custody. Since Romanov has the right to know about the criminal proceedings against him, a request has been made to publish summonses to court sessions on the court's website, as well as in some Ukrainian state media such as “Uriadovyi Kurier” (“Government Courier”) to give him the opportunity to appear in court. Only after the court makes sure that Romanov has been properly informed about the trial and that his non-appearance is willful, it will be possible to start a special court proceeding, a hearing in absentia.

Romanov's unidentified accomplice is subject to a separate proceeding. According to Ukraine’s Criminal Code, such crimes provides for 10 years to life imprisonment.

Investigators believe that the accused Romanov is currently residing in the Russian Federation. But some information on social media allege that he has been killed. As early as March 17, the editor of the "Rusjev" portal Vitaly Rozhdaev wrote that “the rapist and war criminal Romanov, who tortured people in Bohdanivka” had been killed by the Armed Forces of Ukraine. Blogger Dzhedzula reported the same information on Facebook.

Ukrainian law enforcement officers say they do not have information about Romanov's death. Off the record they advise addressing such “rumors” to “those who spread them”. But if it turns out that the accused is dead, then they are ready to take the decision provided for by law, i.e. closing the case.

The disclosure of the victim’s identity

Attorney Andrii Domanskyi from the Center for Free Legal Aid is representing Romanov in court. He didn’t comment on the merits of the case yet. The Prosecutor also filed a motion for a closed trial. The Criminal Procedural Law allows this because it is a sexual crime, in order to prevent any disclosure of information about the identity of the victim, the circumstances of her personal and family life, and any dissemination of information that may humiliate the person.

The information that can help identify the rape victim should have been withheld when the allegation was published, but it wasn’t. Her identity was disclosed in the prosecutor's initial submission which was signed by the Deputy of the Investigative Department of the Brovary District Police Department Volodymyr Bilko on 12 March. The Prosecutor of the Brovary District Prosecutor's Office Volodymyr Ponomarenko approved the submission. According to the Prosecutor, measures are now being taken to enforce the rights of the victim as much as possible. “At the moment the court proceedings are held behind closed doors, as you can see”, said the Prosecutor of Kyiv Region Oksana Kalius, who is in charge of the case in court. “We do everything we possibly can. Everyone is responsible for their piece of work”, she said, refusing to comment on the unfortunate disclosure by her colleagues.

What’s the threshold for evidence on rape?

Before the court the police conducted the interrogation of the victim, identification of Romanov in the photo by the victim and witnesses, inspection of the crime scene, crime scene reconstruction, and psychological examinations of the victim. But since the trial is on hold, the Prosecutor has refused to reveal more details about the evidence collected against Romanov.

The prosecutor says that evidence for wartime rape are collected in the same way as for rape in peacetime. Not everyone agrees. “I have a firm belief that the evidence to prove guilt should be different,” said human rights advocate and co-founder of the Ukrainian Women Lawyers Association “JurFem” Larysa Denysenko. “And I insist on it. The International Criminal Court does not require medical reports as mandatory. The testimony of the victim should be enough. But, as far as I understand, even though the Prosecutor’s Office has changed their approach to the interrogation, which I consider to be a progress, they still use the same typical evidenciary approach for sexual crimes: medical reports, witness statements, inspection of the scene of events, and material evidence of the crime.” In Denysenko’s view, the words of the victim are enough. “Everyone is doing their best to search for other evidence. But when this is simply the only thing that the court of justice has, they proceed from the principle of unconditional trust. Why is it important to rely on the words of a survivor? Bruises on the body disappear, the body is healed, witnesses pass away or disappear, but mental wounds remain. These crimes have no statute of limitations. The person has the right to be heard and has the right for justice,” she explains.

Officially there are currently nine cases of rape allegedly committed by Russian troops that are investigated in Kyiv region. Only two notices of suspicion were issued so far, included the one against Romanov. 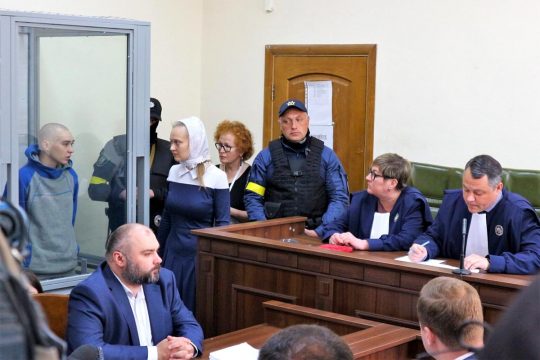 Four Ways to Accountability in Ukraine
Most read