On July 22, by fifteen votes to one, the International Court of Justice (ICJ) declared itself competent to rule on the allegations of genocide against the Burmese minority of Rohingyas. The judges rejected arguments presented by Myanmar representatives challenging the admissibility of the case filed by Gambia in November 2019. The small West African country accuses Myanmar of violating the Convention on the Prevention and Punishment of Genocide in its attacks on the Rohingya minority, particularly during military operations in 2016 and 2017 that led to a mass exodus of this Muslim-majority population to neighboring Bangladesh. The ICJ thus gives itself the right to judge the case on its merits.

Myanmar disputed that Gambia was the real plaintiff in the case, claiming that it was actually acting by proxy on behalf of an international organization, the Organization of Islamic Cooperation (OIC). Rangoon also argued that there was no dispute between their two countries and that the Gambia was not directly affected by the alleged facts - two other elements that, according to the Burmese authorities, made the Gambia's legal action on the case inadmissible.

For the ICJ, "the question of what may have motivated a State such as The Gambia to commence proceedings is not relevant for establishing the jurisdiction of the Court" and "no evidence has been presented to it showing that the conduct of The Gambia amounts to an abuse of process”. The Court reaffirms that "all the States parties to the Genocide Convention thus have a common interest to ensure the prevention, suppression and punishment of genocide, by committing themselves to fulfilling the obligations contained in the Convention."

A dissenting voice came from Chinese judge Hanqin Xue. For her, the elements of the file show that "The Gambia was tasked and appointed by the OIC to institute the proceedings against Myanmar in the Court" and that, on the other hand, "The Gambia does not claim any link with the alleged acts in Myanmar”. Therefore, "The Gambia's legal action, either for the common interest of the OIC Member States, or for the common interest of the States parties to the Genocide Convention, is arguably tantamount to a public-interest litigation," wrote the Chinese judge. "Allegations of genocide or other genocidal acts require serious investigation and proof. When the applicant has no link whatsoever with the alleged acts, it is apparently difficult, if not impossible, for it to collect evidence and conduct investigation on its own. Relying entirely on the evidence and material sources collected by third parties, for example United Nations organs, human rights bodies or the State concerned, only reinforces the argument that the case is a public-interest action, actio popularis. Such action, even in the form of a bilateral dispute, may in fact allow international organizations to have access to the Court in the future." In sum, for the Chinese judge, "the applicant must have a territorial, national or some other form of connection with the alleged acts" whereas the majority of the Court held that no special interest of a State was necessary to invoke the responsibility of another State under the Genocide Convention.

It is far from unusual that the position of ICJ judges more or less discreetly reflects the political position of their country of origin (China is one of the few countries to maintain relations with the Burmese junta). This was, for example, recently seen in the complaint filed by Ukraine after the Russian invasion.

In her dissenting opinion, Judge Xue considers that "when the applicant is in fact acting on behalf of an international organization, albeit in its own name, the respondent may be placed in a disadvantageous position before the Court. This is particularly true if several judges on the bench are nationals of member States of the international organization concerned." At least four ICJ judges are from OIC member states.

The court's decision comes as no surprise. In January 2020, the judges had ordered the Burmese authorities to take emergency interim measures to prevent violence against the Rohingya. At that time, it had already given indications of its position on jurisdiction. The pace of the proceedings confirms, above all, that it will be years before the court issues its judgment on the merits.

Meanwhile, the jolts of history continue to shake Myanmar. Ironically, it was the judge ad hoc appointed by Myanmar, the German Claus Kress, who courteously challenged the court on this issue in a statement attached to the court's ruling.

For things have changed a lot since the former human rights icon and Nobel Peace Prize winner Aung San Suu Kyi came to represent and defend her country before the ICJ in December 2019. Since then, the Burmese army has taken over all power following a coup d'état, in February 2021. Aung San Suu Kyi was arrested and sentenced to 11 years in prison. And it is two members of this junta not recognized by the UN who are now representing Myanmar before the ICJ. "Despite these deeply troubling facts, the court conveniently proceeded to treat whoever the military regime sent to The Hague as Myanmar Agents (or legal representatives of Myanmar) as if they were genuine representatives of the State - and, needless to say, the people of Myanmar," wrote Maung Zarni, Burmese human rights activist and member of the NGO Genocide Watch.

Judge Kress was keen to point out that the UN has expressed official concern about the new political repression in Myanmar, which was not mentioned in the Court's judgment. He pointed out that the "government of national unity" in exile, which officially represents the country at the UN, had appointed its own agents to defend the case before the ICJ. According to Judge Kress, "under such circumstances, for the Court to proceed in the way that it did is less than satisfactory”.

According to the NGO Human Rights Watch, "since the February 2021 coup, the military junta has placed even greater movement restrictions and harsher punishments on Rohingya for attempting to leave Rakhine State”. In a press release, the American NGO hopes that "by holding the military to account for its atrocities against the Rohingya, the World Court could provide the impetus for greater international action toward justice for all victims of the Myanmar security forces' crimes."

Myanmar's military junta has apparently not been very responsive to the pressure. On July 25, it announced that it had carried out the first executions of political opponents since 1988. According to the UN, 114 Burmese have been sentenced to death since the February 2021 military coup. 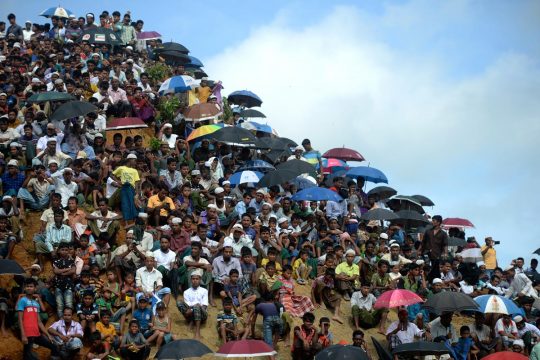