On Monday, July 20, an exceptional trial is set to open in Dakar. It is the trial of former Chadian president Hissène Habré, charged with crimes against humanity, war crimes and torture. He is being tried by the first court ever set up by the African Union to judge a suspected perpetrator of serious human rights violations. It is also the first time that a former African Head of State has been put on trial in another African country for such crimes. This trial is all the more significant in a context of tension between many African governments and the International Criminal Court (ICC)

Mbacké Fall was young as an investigating magistrate when in1991 the Senegalese court he was working for was mandated to recover the plane that had allowed Hissène Habré to flee his country with the national Treasury and take refuge in Dakar. “Those were the first shots fired in the Habré case,” says Mbacké Fall, in a joking tone. Twenty-four years later, the two men meet again. Mbacké Fall as the Prosecutor of the Extraordinary African Chambers, created specifically for this trial, and Hissène Habré as the Accused, who nevertheless still has some strong support in Senegal that he has been cultivating since his exile there a quarter of a century ago. JusticeInfo.net spoke to Mbacké Fall.

JusticeInfo.net: Are you ready for the trial of former Chadian president Hissène Habré?

Mbacké Fall: The Extraordinary African Chambers have worked hard. Four rogatory commissions have been to Chad. We have gathered 2,500 witness statements, and our investigators have been to former detention sites and mass graves. I have been to get the case files on Habré from Belgium which, under the principle of universal jurisdiction, had started to investigate the case. And above all, we have as evidence major documents, archives from 1981 to 1990 detailing the organigram of terror. We have been through them and computerized them, and all the information converges to show that Hissène Habré directed the departments that carried out the repression and monitored closely what they were doing.

“I don’t understand the attitude of Chad”

JusticeInfo.net: Are the Chadian authorities cooperating with you?

MF: As well as Hissène Habré, we issued arrest warrants for five other people who were responsible for the repression. But despite our cooperation agreement with the Chadian authorities, they were never handed over to us, and they were not even informed that we wanted to question them. I don’t understand this attitude of Chad. We also want “insiders” from the Habré system, people who directed or organized the repression, to come and testify. Their testimony is important to establish the hierarchy of relations and the fact that Habré was kept well informed about the violence being used by the services he headed. I hope these people will be transferred to Dakar to appear at the trial. The Senegalese Justice Minister has written to his Chadian counterpart to try to get the obstacles to judicial cooperation lifted.

JusticeInfo.net: How do you explain the attitude of the Chadian authorities? Do you think they fear that current Chadian president Idriss Deby, who overthrew Hissène Habré in 1990 and was the army commander in 1984, will be cited in the trial?

MF: Chad is the country that has contributed the most funding for the trial of Hissène Habré. But it is true that the Chadian president’s entourage seems to fear that his name could be cited in connection with the repression in the south of the country in 1984. Certain people have told us they fear that Idriss Deby’s name will appear, but we have not found any material proof or circumstantial evidence to support this. In addition, the Statutes of the Extraordinary African Chambers give them a mandate to punish only the person or persons most responsible for the crimes.

“Habré’s arrest was the high point for me”

JusticeInfo.net: Hissène Habré’s crimes were perpetrated during the Cold War, when he was supported by the US and France. Will this come up during the trial?

MF: Hissène Habré was the friend of the West, which used him as a rampart against the activities of Libyan leader Gaddafi. At the time, neither France nor the US felt concerned by the Habré regime’s massive human rights violations. But, having said that, I don’t think it will have an incidence on Habré’s guilt.

JusticeInfo.net: What has been the high point for you up to now in the Habré case?

MF: Nobody, not even Hissène Habré himself, thought he would be arrested. He had become integrated here, taken a Senegalese wife, established a network with lots of people and thought he was safe. As he was leaving the house of one wife to visit another, the police followed him. When the police presented him with his arrest warrant, his face changed colour. He said: “Give me a minute. I want to go and find something in my office.” But he was not able to do what he wanted. We found three automatic weapons at his house. Did he want to use them against the police or himself? We do not know. For me, his arrest on June 30, 2013 was the high point up to now. Chad even declared it a public holiday!

The Extraordinary African Chambers as a “new model”

JusticeInfo.net: How have you found Hissène Habré?

MF: Ever since his arrest, he has walled himself in silence. He refused to answer questions during his initial appearance and refused to sign the report of the appearance. His team have tried every manoeuvre, including saying that he is now suddenly seriously ill…

JusticeInfo.net: Do you think this first trial of a former African president in another African country for massive human rights violations sets a precedent?

MF: It is certainly a precedent. The Extraordinary African Chambers are a new model. It is good that a former African head of State be tried in Africa and not in Europe. Many African governments are more and more reticent with regard to the ICC. Is it better to have a permanent African tribunal, which would undoubtedly eat lots of funds, or an ad hoc tribunal like this one, which will close after this case and could be revived again if there is another? Plus, it is not in contradiction with the existence of the ICC, which remains a court of last resort. 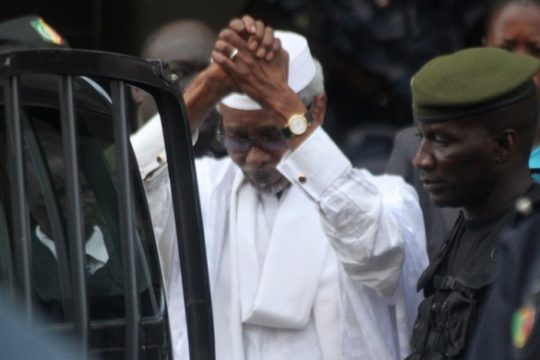 Will a Silent Hissène Habré Decide to Speak at his Trial?
Chad : Related articles

Pierre Hazan, JusticeInfo.net Head of Project, associate professor at the University of Neuchâtel
All reports from this author
Since June 2015, Pierre Hazan is the editorial advisor of JusticeInfo.net. He is also a Special Advisor in Transitional Justice with the Center for Humanitarian Dialogue (HD), a Lecturer at the Geneva University of Art and Design and a Professor at the Academy of Journalism and Media at the University of Neuchâtel. In the past years, he worked with the Office of the United Nations High Commissioner for Human Rights. A former diplomatic correspondent specialized in international justice and humanitarian action for the daily newspapers Libération (Paris) and Le Temps (Geneva), Pierre Hazan has been an attentive observer of many conflicts (former Yugoslavia, Rwanda, the Middle East, etc.). ). Associate researcher at Harvard Law School (2005), then at the United States Institute for Peace in Washington (2006), he has published numerous books, including La justice face à la guerre (Stock, 2000), Juger la guerre, juger l’histoire (PUF, 2007), La paix contre la justice ? (AVE/GRIP 2010).