After numerous nominations and awards in international festivals, Tunisian director Leyla Bouzid has just won four prizes at the Carthage film festival (November 21-28 in Tunis) for “As I Open My Eyes”, the story of a group of musicians facing harassment from Ben Ali’s police on the eve of the Arab Spring. This feature film is a real hymn to freedom. It opens in cinemas in France on December 23 and in Tunisia on January 13.  In this interview, Leyla Bouzid talks to JusticeInfo about the fim.

JusticeInfo.Net: You show police surveillance, people’s fear and the way any criticism was met with harassment under former President Ben Ali. Why did you choose this theme, five years after the Revolution?

Leyla Bouzid: It’s something I wanted to do right after the Revolution. I had a strong awareness that we needed to record history through the cinema, explain for those who have not understood the reasons and deep-seated roots behind the Tunisian revolution, and show people this fear and repression by making it part of a story. It seemed to me that reflecting on the past is useful and necessary in order to face the future. The film took five years in the making, because generally it takes longer to make a fiction film than a documentary. When I started writing it, I didn’t know how long the wind of freedom blowing over Tunisia since January 14, 2011 would last. And even during the shooting of “As I Open My Eyes”, the post-Revolution judicial authorities were still harassing rappers like Weld El 15, Klay BBJ and Kafon, and going after some young bloggers for cannabis consumption. So they were still against young people who opened their mouths. Unfortunately, the film is not just historical, it’s also talking about now!

JusticeInfo.Net: Indeed, the film is full of young Tunisians bursting with rebellious and creative energy. Did you want to pay a tribute to that social category, which played a big role in the revolutionary movement?

LB: I wanted young people and their energy to be at the heart of the film and of all my artistic choices: the casting, music, editing, the way it was filmed. For me, “As I Open My Eyes” is really about the process of destroying that energy. At the beginning of the film, the rhythm is quite fast paced and staccato, like the desires and dreams of this group of young musicians. Then it becomes slower, the initial energy starts to disappear little by little. Farah, the main character, faces three levels of constraint on her freedom. The first is within the family, but she manages to overcome it. The second is the way society views her, and she is also strong enough to overcome that. The third comes from the police state that she is living in, which manages to curb her rebelliousness and silence her. 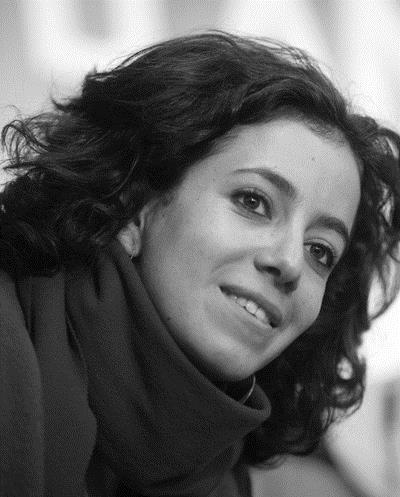 JusticeInfo.Net: How did you get the idea to bring song into the story of the film?

LB: Initially I thought Farah could be a blogger, but then I didn’t think that was very well adapted to cinema. Then quickly came the idea to introduce an element of music and song, especially as a song can catch on very quickly. The authorities fear song because it’s difficult to control and repress. Also, rock music is a wonderful representation of the energy I was just talking about.

JusticeInfo.Net: Do you think Tunisians now have a tendency to forget this past filled with fear, censorship and omnipresent police surveillance? What can film do to help people not to forget?

LB: Yes, I think Tunisians are not doing enough work on remembrance. They are focussed on the future, and you could say that is good. But I think art, cinema, education and the work of historians can help us remain aware of the significance, the demands and goals of the Revolution that shook our country. During the shooting of the film, I noticed that many people had already forgotten what it was like living under Ben Ali. When I said to members of the cast “here we need a heavy silence, because you couldn’t hear such things under Ben Ali and not be afraid”, some of them had trouble remembering. People have lost the reflexes they had at the time, the memory of repression and paranoia, as if it were all really behind us. Fiction can use emotions to move people and touch their memory on these serious issues.

JusticeInfo.Net: You film a scene where the political police inflict psychological torture on the young female singer. What is that scene based on?

LB: In Tunisia, there are many more people than you think who have suffered such things! I chose to show psychological torture to remind people how the regime destroyed young people’s will and imposed silence on Tunisians. In the film, the police agent evokes Farah’s private life, threatens her with prison, plays on several levels to terrorize her. The scene was carefully written on the basis of several real life testimonies. The young man who plays the role of torturer, a technician on the film crew who is not a professional actor, actually experienced a similar thing in a police station after he planned to make a documentary about land grabbing by one of Ben Ali’s sons-in-law.

JusticeInfo.Net: How do you assess the climate for freedom of expression and creativity in Tunisia today? Is there still a risk of a return to repression of free speech?

LB: I think we are in a period of struggle between different forces. Some are pulling us upwards and others are trying to pull us down. There is still much work to be done to define our freedoms and ensure they are a reality. Yes, freedom of expression is at risk. Unfortunately also, fighting terrorism can often be used as a pretext to reduce people’s freedom.

Copy this HTML into your CMS
Press Ctrl-C to copy
Related articles
"Tunisia is a test case" says professor Larbi Chouikha
Fear and Trauma Silencing Tunisia’s Women Victims
Tunisia's Anti-Terrorist Law Threatens the Media
Tunisia : Related articles
Tunisia: Will hope for transitional justice come from Kef?
Tunisia: artists take up the torch of remembrance
Most read
Did Christopher Columbus commit genocide?
Everything you need to know or argue about a special tribunal on Russia’s crime of aggression
Other - Related articles
UN commission on Ukraine crimes “will seek to identify persons and entities” responsible
Viktor Bout for Brittney Grinner: a prisoner exchange that forgets Liberia