Search
Burundi security forces carried out executions by shooting people in the head after street battles in the capital earlier this month, Amnesty International said Tuesday, warning of a "deepening human rights crisis".
Violence on December 11 was among the most intense for months in the troubled central African nation, and the Amnesty report documented how security forces shot people at close range, warning of a "continuing spate of brutal killings in Bujumbura".
Burundi descended into bloodshed in April when President Pierre Nkurunziza announced his intention to run for a controversial third term, which he went on to win in July.
Hundreds of people have been killed in months of street protests, which have devolved into regular armed attacks with gunfire disrupting the nights and dead bodies appearing on city streets almost every day.
"Many of the dead had been killed by a bullet to the head and at least one body was found tied up," the report read.
"Neighbours and other witnesses described how numerous victims had been pulled out of their homes by the police and shot at point-blank range."
The government said at least 87 were killed on December 11, but the United Nations said the figures was feared to be likely "considerably higher".
Attacks targeting the security forces have escalated, with rebels armed with assault rifles, rocket-propelled grenades and mortars attacking police convoys and government installations.
"Burundian police appeared to have deployed indiscriminate force in responding to threats," Amnesty added.
"Even more egregiously, by deliberately killing persons under their control, including civilians who posed no threat, the security forces violated the unequivocal ban under international law on summary and extrajudicial executions."
The 54-member African Union last week said it would send a 5,000-strong force to halt violence that has sparked fears Burundi is sliding back towards civil war.
But Burundi's parliament on Monday rejected the proposed mission after the government described it as an "invasion force".
Share
Republish 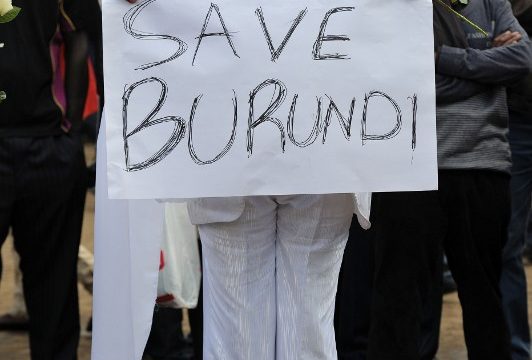