“I was 13 the day I disappeared; the day my mother was left without her only child; the day my life was cut short. Many others went missing like me, and their families still await to know what happened to them. Do not let our story end here.”

Every Wednesday, local newspapers have been publishing such testimonies - stories written in the first person of women, men, or as in this case, children, who went missing in Lebanon during its 15-year war. These stories are part of the campaign “Do not let my story end here”, orchestrated by the Lebanese NGO Act for the Disappeared, to accompany the launch of a searchable interactive database of missing persons called “Fushat Amal” or Space of Hope.

In a country that has done very little in terms of addressing the hefty legacy of its armed conflicts on its population, let alone bear any form of meaningful recognition to its victims, this initiative falls in line with recent efforts by civil society to push the issue of missing persons towards a resolution - while persisting in their demand that a sustainable and comprehensive process can only be led by the State authorities.

Between 1975 and 1990, successive armed conflicts tore at the societal fabric by way of sieges, forced migration, massacres, and kidnappings, which in most cases, resulted in the victims never being heard from again. Some went missing as a result of massacres while others were disappeared at checkpoints, on the roads, or abducted from their homes, by the various armed groups that took part in the war, both militias and local and foreign armies. A government record of war-time casualties put the number of missing persons at 17,415 but this number was never cross-checked or verified. At the time of writing, family associations detain records of some 2,500 missing persons, including over 600 cases whereby families believe their relatives are detained in Syrian prisons.

Throughout the 1980s and 1990s, the family associations called for the return of their loved ones or that investigations be conducted to clarify their fate, making little case of the post-war amnesty law or the overall lack of will to address war-time crimes or needs of victims. Their persistent pressure resulted in the creation of two successive government-appointed commissions, in 2000 and in 2001; these however, did little in terms of investigation and even less in providing answers to the families. Another joint Syrian-Lebanese commission created in 2005 followed suit.

Starting in late 2005 - 2006, several human rights organizations saw the light of day, and several international organizations opened up branches in the country, following the withdrawal of Syria’s armed forces from the country for the first time since the end of the war. This created a more favorable context for the issue of the missing; since this time, local and international NGOs and family associations managed to build a steady momentum to push the issue forth and aimed primarily at preparing the ground for a sustainable search and identification process. They have been exploring various avenues that include street action, nationwide campaigns, traveling photo exhibitions, strategic litigation, data collection projects, research-based recommendations, and oral history projects.

In 2012, the family associations claimed before the State Shura Council, the top judicial authority, their right to obtain the files that were collected by the 2000 Commission and kept by the government’s Secretary Office. In March 2014, the Council issued its decision in favor of the families, in an unprecedented ruling that enshrined their right to know. The associations are currently pursuing another judicial path to obtain the identification and protection of sites of mass graves.

That same year, along with a number of local and international organizations, they developed a draft legislation to enable the creation of an independent national commission that would be mandated to clarify the fate of the missing persons, and would be equipped with the necessary powers and resources to conduct its work in an effective manner. Following the State Shura Council, two members of parliament who had been involved in the drafting process presented the draft for discussion in parliament; it has since been consolidated with another earlier draft, and that version sits today before the Human Rights Parliamentary committee. Earlier this month, the International Center for Transitional Justice (ICTJ), which has been involved in many of these initiatives, including the drafting of the bill, published a study that unpacks the organizational and financial resources needed for the creation of the National Commission.

In 2012, the International Committee of the Red Cross (ICRC) launched a program to collect ante-disappearance data of missing persons from their relatives, and has conducted over 2,100 interviews to date. It has further set the grounds for a DNA collection program - one of the main demands by family associations. The organization has been awaiting a green light from the government for several months to proceed with this program, in the meantime conducting training and assessments of needed resources; but recently, it has alluded to the possibility of moving ahead with the program anyway. In parallel, Act for the Disappeared has been researching events and incidents that could help locate sites of mass graves and develop hypotheses about the potential identity of victims buried there. Both organizations would eventually hand over all this data to the National Commission.

Most of these projects were initiated at a time that seemed prone to opening a discussion about the legacy of the war in general. Specific promises were made, including in 2008 when the newly appointed President mentioned it in his inaugural oath, and in following years, successive cabinets pledged to address it. But what was believed to be a window of opportunity never saw any meaningful response from the authorities. And today, that window seems to have closed; the Lebanese State has been without a President for over a year and the government seems to have relegated most public interest issues to the back burner, including an unprecedented garbage collection crisis that triggered a series of mass demonstrations over the summer, with still, no solution to date.

It is more than ever a challenge to maintain the issue of the missing in the public space. The name of this latest initiative “Fushat Amal” may sound as counterintuitive as ever, since there is scant hope today to see the Parliament ratify the draft or the government facilitate the data-collection work. But the hope in reality expresses the fruit of the past years’ continuous and strategically targeted efforts by civil society groups; not only has the judiciary recognized for the first time the right to know, these efforts have first and foremost pulled the rug under claims that Lebanon lacks the resources, know-how or ability to conduct serious investigations. More importantly, they are in effect changing the overall societal mindset towards this issue. One telling example is that since the launching of “Fushat Amal”, Act for the Disappeared has received numerous requests by volunteers to carry out interviews, as a way to show their solidarity with the families.

“We feel better now knowing that there are people thinking of us, working with us, and standing by our side. Now after 30 years, there are people whom we can talk to and express our concerns,” says the mother of Khaled Hajj Ali, disappeared in 1985, in one of the campaign testimonies. 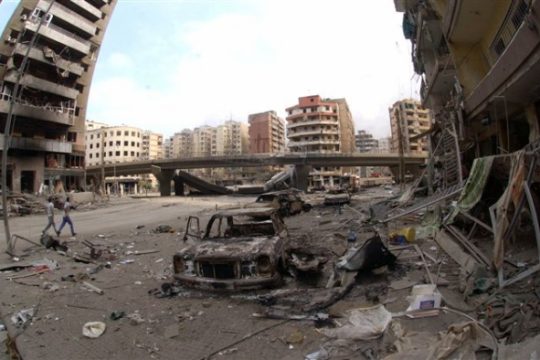 The Time Bomb that is Lebanon
Lebanon : Related articles

In Lebanon, the Lokman Slim Foundation will keep the memory of political assassinations
Most read