Former rebel leader Jean-Pierre Bemba was a towering figure in business and politics in the Democratic Republic of Congo until a 2006 electoral defeat opened the way to a guilty verdict at a war crimes court.

Judges at the International Criminal Court (ICC) in The Hague on Monday found the one-time vice president guilty of war crimes and crimes against humanity for failing to stop the rapes, killings and looting carried out by his private army in the neighbouring Central African Republic in 2002 and 2003.

Bemba's case was the first before the ICC to focus on sexual violence as a weapon of war, and the first to find a military commander to blame for the atrocities perpetrated by forces even though he did not order them.

The former feared warlord, who went on to become vice president in DR Congo's transitional government from 2003 to 2006, will remain in custody in the Netherlands until his sentencing at a later date.

Born on November 4, 1962 in Bogada in the northwest Equateur province of what is now the DRC, Bemba's father was a rich businessman close to dictator Mobutu Sese Seko, who ruled from 1965 until his ousting in 1997 and named the country Zaire.

Young Bemba was schooled in Belgium, the former colonial power, and went on to take over family businesses, using his popularity in the capital Kinshasa to build on his wealth and expand into sectors such as mobile phones, air freight and television.

Heavy-set and an imposing 1.90 metres (6 foot 3 inches) tall, Bemba is known for his strong authoritarian streak.

A former business associate described Bemba as being "attached to his calculator" and said he was "too impulsive, too authoritarian as boss".

"The social side was not his strong suit," the source added.

Bemba became leader of the Congolese Liberation Movement (MLC) rebels, a 1,500-strong force backed by neighbouring Uganda and opposed to the Kabila regime.

Bemba has spoken with pride of his years in the bush, where his men controlled Equateur province and the border region with the Central African Republic.

Bemba sent his fighters into CAR in October 2002 to help put down an attempted coup against then president Ange-Felix Patasse, sparking a campaign of horrific abuses by MLC troops against the civilian population.

After the Congolese war ended in 2003, Bemba laid down his arms and was awarded one of four vice-presidential posts shared out among wartime rivals in an interim government tasked with bringing about elections.

In 2006, he seemed by far the most serious poll opponent of young soldier Joseph Kabila, who had been rushed to power by politicians after the 2001 assassination of his father.

After Kabila won a presidential poll scarred by political violence, Bemba vowed to lead the opposition and was elected to the national Senate.

However, he refused to let his militia be integrated into the ranks of the regular army, insisting he needed the MLC to ensure his own safety.

In March 2007 an armed stand-off erupted into violence in Kinshasa, claiming at least 300 lives, according to the United Nations, which maintains a large peacekeeping force in the DRC.

As the government brought charges and the courts began to move against Bemba, he quit the country, ostensibly to seek medical treatment in Portugal.

He left Kinshasa escorted by UN armoured vehicles on the night of April 11, 2007, just weeks after his forces came off worst in clashes with government troops.

Until his arrest in Brussels in May 2008 on an ICC warrant, Bemba lived between Portugal and Belgium in what he called "forced exile", insisting he would yet return home to take up an opposition role.

Bemba's trial began in 2010 and he entered a plea of not guilty. 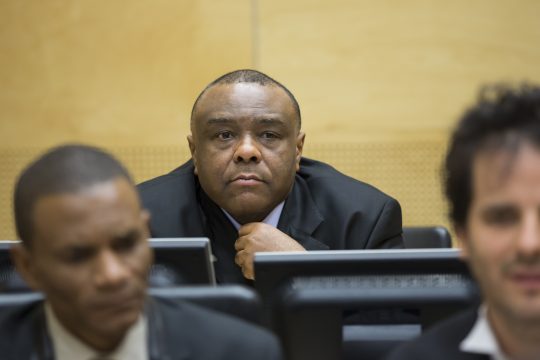