Indonesia’s most wanted Muslim extremist, Santoso, has been killed in a firefight with security forces, police confirmed Tuesday, ending a lengthy hunt for the Islamic State (IS) group supporter.

“It’s definitely Santoso,” Central Sulawesi police chief Rudy Sufahriadi told AFP, after a process to identify the militant’s body. He was killed in a clash on Monday on central Sulawesi island.

“I have hunted him and I have arrested him before, we have asked people and we have sent people (to identify the body) who fought with him and went on jihad with him,” Sufahriadi said.

“They have confirmed it was him.”

His death is a major victory for Indonesian authorities who had pursued the extremist for five years, sending thousands of security forces to search for him and his band of a few dozen followers in their remote jungle hideouts.

His group carried out a string of deadly attacks on domestic security forces and was known for training militants from around the archipelago. In 2014 he pledged allegiance to IS and earlier this year was placed on a list of global terrorists by the United States.

Support Us
CONTRIBUTE TO INDEPENDENT INFORMATION ON INTERNATIONAL JUSTICE
Across the world, access to justice and information is vital for societies to rebuild after periods of serious violence. This is why we are dedicated to offering a free website adhering to strict journalistic methods which is accessible to everyone in the developed and developing world. Justice Info is funded by donations. Each donation helps our journalists bring you independent information. A regular donation is ideal. We are also grateful for one-off donations.
SUPPORT US
Indonesia : Related articles 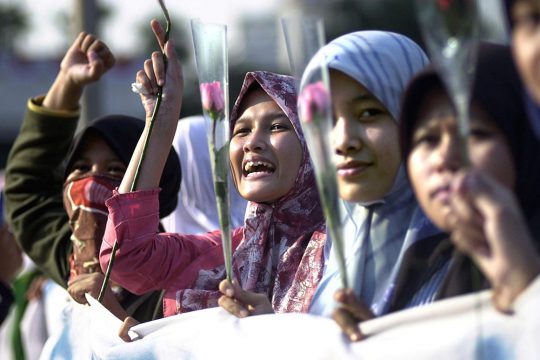 4 min 4
The Aceh Truth and Reconciliation Commission, giving a voice to survivors