Nepal’s multitude of post conflict governments have been controlled and hijacked by alleged perpetrators and violators of human rights. For more than 9 years justice has been a distant dream for thousands of conflict victims. My family and I have been waiting for 14 years to know the truth and whereabouts of my father, who was forcibly detained, tortured and disappeared by security forces then under unified command, led by then Deputy Superintendent of Police (DSP) Pitambar Adhikari who now sits in a senior position at the Nepal police. Other perpetrators have likewise risen to senior rank in the Nepal army and in political institutions. Thousands of surviving families and victims of war want to know the truth about their loved ones and see perpetrators brought to trial. Unfortunately, the government and the major political parties protecting them have sidelined the victims’ agenda for truth and justice in favor of concentrating their own power. The withdrawal of crime related cases, promotion of alleged perpetrators, instrumentalising of Transitional Justice commissions to advance government agendas, the perpetuation of false narratives around the peace process and the undermining of the criminal justice system, disrespecting the supreme court verdict and lying to the international community, have demonstrated that there is a little hope for justice and victim-centered approach to be delivered, where the flawed Transitional Justice process has no credibility and offers no prospect of accountability as a responsible mechanism addressing victims’ rights and needs.

Nepal underwent its Universal Periodic Review (UPR) on 4th November 2015 at the UN Human Rights Council, a ritual where states are held to account for their record on human rights. Nepal’s delegation - led by deputy PM and foreign minister Kamal Thapa - lied about Nepal’s abysmal human and civil rights record. It is a great shame for war victims and the general public that the deputy PM who has been named as an alleged perpetrator by the 2006 Rayamajhi Commission for his involvement in human rights violations under the then royal regime was defending the government on such a global stage. There are other ministers in the cabinet and many in the parliament who have also been accused of past crimes. The government has never implemented Supreme Court decisions seeking to ensure accountability for conflict-era violations.

During Nepal’s session at the UPR, member states expressed serious concerns around the failure to criminalize either torture or enforced disappearances, the persistence of widespread impunity and the ineffectiveness of transitional justice mechanisms, both the Truth and Reconciliation Commission and the Commission to Investigate Enforced Disappearance. Among the areas highlighted by the review were: Nepal’s failure to pursue accountability for crimes committed during the 1996-2006 armed conflict, including the failure to investigate and prosecute perpetrators of such crimes or to provide justice and reparation to victims; the 35-day statute of limitations on reporting rape cases, and the excessive use of force by security forces during recent demonstrations in the aftermath of new constitution. The latter – whatever one’s view of the rational for protests in the Terai – demonstrate that the refusal to investigate and prosecute past crimes is echoed in state behaviour today: the recent Human Rights Watch report on police treatment of both protestors and Madeshis more generally reads like something from the worst days of the Maoist conflict.

The transitional justice mechanisms have been paralyzed without effective functioning. Both commissions have become invisible, and have rapidly lost credibility. The commissions have failed to build trust among the victims’ community, and have become yet another politicized government body showing loyalty to the political bosses who appointed them. Despite the eight months since their appointment, they still have no staff, and no clear roadmap or commitment to address victims’ concerns and agendas. They have squandered important time and spent precious tax money to help only themselves, using state resources in the name of victim support which ridicules victims’ struggles for justice.

The commissions have failed to demonstrate any level of independence or victim-centred attitude. Forced to rely directly on government funding, the commissions cannot hire their own staff and have no control over their secretaries, meaning its not a autonomous and constitutional body but rather a political agent of the government to serve their agenda as a poor department of a line ministry. Examining their performance over the past 8 months, their failure is already becoming clear: these commissions cannot deliver on their mandates.

As a result of the faulty constitution process, the balance of political power and the politics of victimhood, the government has forgotten the past and continues to ignore Supreme Court decisions (1 June 2007, 2 January 2014 and 26 February 2015). During the last UPR in January 2011, Nepal accepted several UN recommendations and yet after 4 years there has been no progress to fulfill those international obligations and no significant steps have been taken to address impunity or effectively implement the court decisions and recommendations made by the National Human Rights Commissions and the UN Human Rights Committee. Again Nepal accepted to revise the transitional justice mechanism Act in line with the Supreme Court verdict, but there is no trust of delivery.

The international community and civil society actors have not been cooperating with the commissions due to its flawed process. The Conflict Victim’s Common Platform (CVCP) has been demanding the creation of a conducive environment for critical engagement, but the commissions have failed to recognize these requests. Parliament failed to amend the faulty clauses of the TRC Act, and without the necessary amendments and with no collaboration with victims representatives, both commissions are unable to succeed.

In such a fragile context, can the new constitution fulfill the need for peace and the peoples’ wishes for social justice and democratic process; especially for the marginalized, poor and victims of violations? How do we test and experiment with the constitution? Government should be responsible and show their accountability to combat social injustices. The polarization within the political class is seen by many as a final test of their commitment to peace and the constitution while the political transition may now be ending, we are seeing the beginning of a new, ethnic conflict. The major parties dominate all political life and remain centralized in Kathmandu even agreed on highly contentious federalism and secularism, with power centered around narrow political elites and driven by the trading of policies for power and money that has long defined Nepali politics.

Government and the ruling political party leaders in Kathmandu don’t listen to the demands of Madhesis, Tharus and other indigenous Nepalis, or to Dalits and womens who have been fighting against discrimination and injustices. Rural Nepalis remain in the state of poverty and social exclusion that provided such fertile soil for the Maoist conflict, and the sacrifices made by its victims appear to have been for nothing. The poorest communities like the Tharus, Madheshis, Magars who provided the fighters for both sides of the conflict have seen no significant change in their lives since the end of the war. The class dynamics and division in Nepali politics could lead to another more virulent conflict. The establishment that has fed a corrupt political culture may ultimately lead to a politics of revenge, in which yesterday’s victims become tomorrow’s fighters. 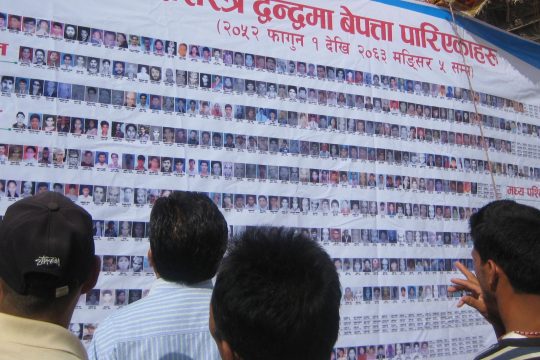 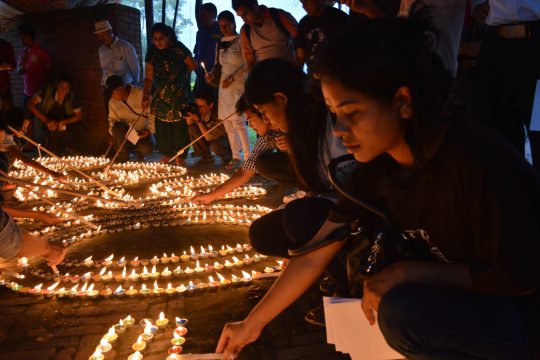