Colombia’s President Juan Manuel Santos says he is certain his government’s peace deal with FARC rebels will be approved in an October 2 referendum because “an imperfect peace is always preferable to a perfect war.”

“The ‘no’ won’t win. The ‘yes’ camp will win. I’m completely sure of that and I am not worried about what some call Plan B. I’m absolutely convinced,” he said in an interview with AFP on Monday.

Santos said he had not been obliged to put the agreement ending the 52-year conflict with the Revolutionary Armed Forces of Colombia, or FARC, to a referendum.

“But a referendum is a democratic thing, it gives much more legitimacy to an agreement like this one. That’s why I insisted there be a referendum,” he said.

The agreement reached in Havana last month after nearly four years of negotiations will be formally signed in the Colombian city of Cartagena on September 26.

But first Colombians must give a thumbs-up to the question: “Do you support the final accord to end the conflict and build a stable and lasting peace?”

If they do, and once the deal is formally signed, the FARC will have 180 days to demobilize, disarm and relaunch itself as a political party. The UN has agreed to monitor the process.

Uribe says a special justice system envisaged for crimes committed during the conflict would give FARC fighters impunity.

“I would like to see anyone who committed horrible crimes, crimes against humanity, behind bars,” Santos told AFP. “But I prefer transitional justice so we don’t continue producing more victims. That transaction isn’t easy to accept for many people, but it is necessary if we want peace.”

He said he had expected the victims of the conflict to be the biggest critics of the arrangements for judging rebels, but to his surprise they have been the most generous.

The FARC is the country’s largest guerrilla force with about 7,500 fighters. It rose up against the state in 1964, starting what is now Latin America’s oldest armed conflict — one that also spawned right-wing paramilitary groups, drug cartels and other armed groups.

A smaller leftist guerrilla group, the National Liberation Army, or ELN, is still active but has indicated it also wants peace talks.

“That depends on ELN,” said Santos. “They have sent signals in that direction, and I tell them: ‘Perfect, just free those you have kidnapped’.”

Meanwhile, his government has already negotiated an agenda for peace talks with the ELN, he said.

– Neither hawk nor dove –

Santos has staked his presidency on achieving peace in a conflict that has claimed more than 220,000 lives.

It has involved a dramatic role change for him. As Colombia’s defense minister under his predecessor Uribe, Santos waged a bitter war against the FARC, weakening it militarily.

“I was never a hawk or a dove. I’ve always been a standard-bearer for peace,” he said. “For this peace to be possible a series of conditions were necessary. One was to negotiate from a position of strength.”

“I don’t think there is a Colombian who has hit the FARC as hard as this public servant,” he said. “And that also has given me moral authority in the face of those who did not want to negotiate.”

A key aspect of his strategy was to involve the military from the very beginning of the peace process — “and they happily participated,” he said. 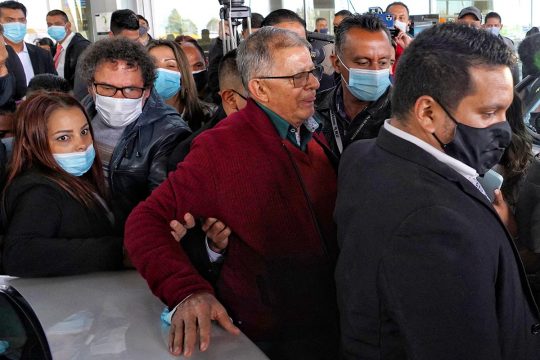 Rodrigo Granda: the diplomatic storm that shook Colombia
Most read