How things have changed! It was an African country, Senegal, that was the first in the world to ratify on February 2, 1999, the statutes of the International Criminal Court (ICC). Driven by civil society, some 30 other African countries then followed its example in the name of fighting impunity.

Many may have forgotten that this wave of ICC membership happened despite a virulent diplomatic campaign by the Bush administration, which threatened to retaliate against any non-NATO State that ratified the ICC statutes. The United States wanted to see the Court die, and yet the majority of African States joined it on a wave of public support.

Sixteen years later, the hopes that civil society placed in the ICC have been dampened. No doubt the Court, by simply existing, has helped a little to avert even worse tragedies. But it has found itself incapable of fulfilling the expectations – no doubt unattainable – of the populations. In fact, the member States have never given the Court the means to fulfil its ambitions. Drawing up arrest warrants and carrying out arrests requires cooperation from States. It is they that can tap phones and arrest – or not – the suspects. And they do this only to the extent that it fits their own interests. As long as the ICC only went after opposition or rebel leaders, governments had no objection, and were even pleased with the Court’s action. But ever since it launched an arrest warrant for Sudanese President Omar Al Bashir, some governments – like in Burundi, which has also announced it is pulling out of the ICC – have turned away from it, fearing a Court that could also go after them.

The ICC has disappointed both a large section of African civil society, which see it as not effective enough, and governments who see it as not sufficiently “controllable”. By announcing his country’s withdrawal from the ICC, South African President Jacob Zuma is positioning himself as the champion of solidarity with his counterparts. Zuma, who was slammed by his own country’s judicial authorities for not arresting Bashir when he visited, is taking revenge, and potentially unleashing a wave of African withdrawals from the ICC. This seems to have already started happening. Burundi, which is the target of an ICC preliminary examination for suspected crimes committed, was in fact the first to announce its pull-out from the Court, even before South Africa. But Burundi’s is a regime with its back to the wall. South Africa, which is not at all targeted by the ICC, gives some kind of legitimacy to all the other African States to pull out. And so on Tuesday, Gambia also announced it was withdrawing, creating an unprecedented situation: the ICC’s most important job is held by Gambian Prosecutor Fatou Bensouda, whose government has announced that it is quitting.

These withdrawals, which could herald others, are bad news. They undermine the ICC’s legitimacy and ambition of universality, but that is not the worst. The most worrying thing is that Africa may be heading for a new wave of violence. All mechanisms to hold this back, however insufficient – like the ICC –, are necessary to limit the risk of new clashes and destabilization of the region.

Since the fall of Gaddafi, Libya has imploded, helping also to further destabilize the countries of the Sahel. Some States – like Mali – now control only part of their vast territory. The situation in Burundi is extremely serious. In the Democratic Republic of Congo (DRC), the postponement to an unknown date of elections initially scheduled for next month is creating a dangerous situation.  UN Special Representative to the DRC Maman Sambo Sidikou warned the Security Council a few days ago that “if the impasse is not resolved rapidly”, the DRC could fall into violence. Some 20 years ago, another crisis in the largest country in central Africa provoked a civil war involving half a dozen foreign armies and a plethora of armed groups that resulted in the deaths of more than five million people, mainly from famine and illness. Last year the presidents of Burundi, Rwanda and Congo-Brazzaville changed their Constitutions to allow them to stay in power. For the last 30 or so years, Yoweri Museveni in Uganda, Robert Mugabe in Zimbabwe and José Eduardo dos Santos in Angola have been clinging to power, despite the frustration of their people and explosions of violence. In this context, any withdrawal from the International Criminal Court sends a worrying warning signal. 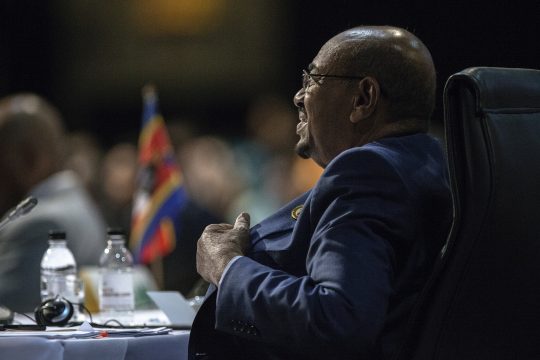 Pierre Hazan, JusticeInfo.net editorial advisor
All reports from this author
Since June 2015, Pierre Hazan is the editorial advisor of JusticeInfo.net. He is also a Special Advisor in Transitional Justice with the Center for Humanitarian Dialogue (HD), a Lecturer at the Geneva University of Art and Design and a Professor at the Academy of Journalism and Media at the University of Neuchâtel. In the past years, he worked with the Office of the United Nations High Commissioner for Human Rights. A former diplomatic correspondent specialized in international justice and humanitarian action for the daily newspapers Libération (Paris) and Le Temps (Geneva), Pierre Hazan has been an attentive observer of many conflicts (former Yugoslavia, Rwanda, the Middle East, etc.). ). Associate researcher at Harvard Law School (2005), then at the United States Institute for Peace in Washington (2006), he has published numerous books, including La justice face à la guerre (Stock, 2000), Juger la guerre, juger l’histoire (PUF, 2007), La paix contre la justice ? (AVE/GRIP 2010).