In April 2014, Tunisia thought it would be able to recover 35 million placed in the Swiss branch of HSBC bank by Belhassen Trabelsi, brother-in-law of the dictator, after the Swiss authorities decided the money could be transferred to the new authorities in Tunis. Bizarrely, Tunisia has never made any moves to get back the other 8 million, which belongs to other members of the Trabelsi-Ben Ali clan.

However, the Swiss federal tribunal decided in 2014 in favour of the brother-in-law, who argued that his right to be heard on the origin of the funds (legal, according to him) was violated. The court decision resulted in transfer of the funds being cancelled. For the moment, these funds are blocked until January 2017, with Tunisia and Switzerland blaming each other for the impasse.

In June 2015, Switzerland reached an agreement with HSBC, accused in the Swissleaks case of having organized an elaborate tax fraud system for clients including the Trabelsi-Ben Ali clan. The public prosecutor’s office had originally filed a complaint against HSBC for money laundering, but a negotiated settlement was finally reached, under which HSBC would pay a 40 million franc fine to the Swiss State for money laundering activities related to all its clients. The dropping of the criminal case against HSBC deprives Tunisia of the possibility of getting damages. The public prosecutor’s strategy is unclear, and the office declined to comment to JusticeInfo on the procedure or the arrangement with HSBC.

In fact, neither the judicial cooperation mechanism between Switzerland and Tunisia, which theoretically allows for broad cooperation to gather evidence against the Ben Ali clan, nor a new law on ill-gotten funds that was passed after the Arab spring, have enabled this case to move forward. According to Berne, this Law of 2015 on assets of illicit origin (LVP) does not apply to Tunisia.

“Since there is judicial cooperation between the two States, the LVP cannot be applied in Tunisia,” says the Federal Justice Office  (OFJ). “Since the Arab Spring, Switzerland has had close contacts with Tunisia on judicial cooperation.  There have been numerous rogatory commissions and funds have been frozen in Switzerland. In principle, they will be returned to Tunisia on the basis of Tunisian judgments ordering their confiscation.”

Pierre-Alain Eltschinger, spokesman for the Swiss Federal Department of Foreign Affairs (DFAE) thinks that the quickest way would be “a decision handed down by the criminal prosecution authorities of the country of origin, in other words Tunisia. Whether the funds are frozen again from January 18, 2017 will depend particularly on the progress of the procedures. The Swiss authorities have transmitted to the Tunisian authorities documents and information for purposes of building evidence”.

In other words, according to the Swiss, the ball is in Tunisia’s court. A source close to the Swiss authorities who did not wish to be named said that Tunisia’s justice system was moving extremely slowly on this case.

On the Tunisian side, Sihem Bensedrine, President of the country’s Truth and Dignity Commission (IVD) confirms that it is urgent to get these funds repatriated quickly. “It is an obligation that the Tunisian State must fulfil,” she said when she was in Geneva in September. “The fund for dignity, which is to provide reparations to victims, does not yet have money, and some of this must come from repatriated funds. The IVD is going to draw up a strategy for repatriation and talk to Tunisia’s partners, such as Switzerland, and let them know that these assets were ill-gotten at the expense of torture, murder, forced disappearances and rape. It is therefore normal and legitimate that these funds be returned.”

The IVD has since June been meant to play an important role in establishing the origin of the money, notably through arbitration procedures allowing people to voluntarily confess acts of corruption and get conciliation. Such confessions could help relaunch the procedure so long as they can be linked to funds in Switzerland. It is to be feared that the IVD – whose very wide mandate ends in two years – might not have time to complete this new task. But according to the Commission president, Tunisia’s determination remains firm. So it is hard to understand what is holding up the transfer. If the freeze on the funds is not extended on January 17, there is nothing to stop Trabelsi from taking back this money he stole from Tunisia. 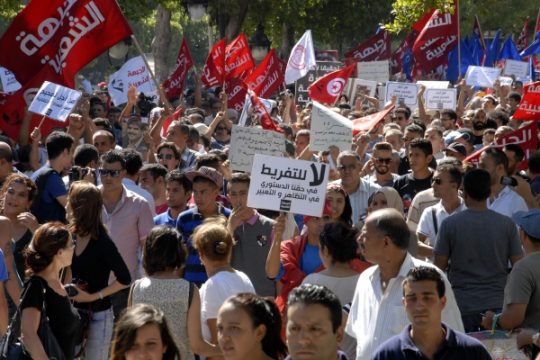