Whereas a Kenyan withdrawal from the ICC is a real possibility, Nairobi may be tempted to instead use the threat of a withdrawal to push its agenda on the ICC.

Since Burundi announced in October that it had decided to withdraw from the International Criminal Court’s (ICC) founding treaty, the Rome Statute, commentators have been busy speculating whether – and, if so, which – other African State Parties would be next. Few had predicted that South Africa would be the first to go ahead, in fact beating Burundi to the finish line by providing the UN Secretary General with the formal notification that is required under Article 127 of the Statute as the first State ever. There has since been no shortage of predictions that many other African States would soon join.

So far, however, only The Gambia has made a similar announcement. But this is likely to be reversed as long-serving president Yahya Jammeh was defeated in recent elections by Adama Barrow, who campaigned on returning to the ICC. What is more, a substantial number of African countries have since come out in strong support of the Court. And despite the drama surrounding the withdrawals, this year’s Assembly of States Parties (ASP) held in The Hague in late November was characterized by calls for “constructive dialogue”, leading some to speculate that there is at least a chance South Africa could change its mind.

Whether or not that will happen, we are unlikely to witness the mass exodus of African States from the ICC some had predicted. But is also clear that a number of African States, Kenya chief among them, are seriously considering joining the exit.

States withdraw from legal regimes on the basis of cost-benefit analysis involving quite diverse, and often predominantly domestic, factors. Commentators have already pointed to the different rationales underpinning South Africa’s and Burundi’s withdrawals: In the case of South Africa, in particular the government’s frustration with domestic courts holding it to account for refusing to arrest Sudan’s president Omar al-Bashir, who is subject to an ICC arrest warrant, when he visited the country last year; and in the case of Burundi, the fact that the ICC has started scrutinizing members of the incumbent regime for their potential responsibility for large-scale violence in the country.

Less attention has been paid to the factors that will determine whether other State Parties such as Kenya will ultimately follow through.

I argue here that the strategy of the incumbent elites centered around the current Kenyan president Uhuru Kenyatta may likely, at least in the short term, involve using the threat of ICC withdrawal to influence the Court’s agenda from within the system and to simultaneously placate domestic and international actors who would respond negatively to an actual withdrawal. Should new significant events occur, of course the calculus could rapidly change.

Why Kenya is seriously considering withdrawal

Kenyatta has in the past been among the most vocal voices calling for African States to stage a mass withdrawal and government officials continue to express serious reservations about the ICC. Shortly before making the announcement that it was withdrawing, South African President Jacob Zuma met Kenyan leaders in Nairobi, suggesting some form of coordination may have taken place. From Nairobi’s perspective the benefit of South Africa going first is that it lowers the reputational costs of a potential Kenyan withdrawal. Rather than primarily being seen as a result of Kenya’s frustrations with the Court’s efforts to prosecute its leaders, Kenya could portray a withdrawal as the consequence of broader concerns about the Court shared by countries in the region.

Further, Kenyatta recently met with his Sudanese counterpart, al-Bashir – against whom there is an outstanding ICC arrest warrant – to discuss issues relating to the Court. Sudan is not a State Party to the Rome Statute, but, like Kenya, has been outspoken in its criticism of the Court. The meeting could be evidence of Nairobi’s desire to demonstrate its opposition to the Court and to possibly engage in further alliance-building against the ICC.

Kenyan leaders may also believe that withdrawing would provide them with an opportunity to reassert the narrative, which they so aggressively asserted at the time when the ICC was pursuing charges against Kenyatta and his deputy, William Ruto, that the Court is biased against Africans and violates the sovereignty of African countries. Although there is an argument that the Court has disproportionally focused on African countries, the reality is more complex and the ICC is increasingly scrutinizing the conduct of major powers, including the US and the UK.

Why Kenya may nonetheless not withdraw immediately

The above indicates that a Kenyan withdrawal in the near future is a real possibility. However, Nairobi may for several reasons be inclined to instead use the threat of a withdrawal to push its agenda on the ICC, rather than immediately withdrawing.

Significantly, Nairobi has an interest in using the withdrawal threat to influence the procedures that will take place following Chambers’ recent decision to refer Kenya to the ICC’s governing body, the ASP, due to its failure to cooperate in the post-election violence-related ICC cases. A withdrawal will not change anything in terms of the ASP’s ability to address Kenya’s non-cooperation, but it could affect the outcome. On the one hand, if Kenya goes ahead with a withdrawal this would essentially render meaningless ASP action since its weak powers to address situations of non-cooperation are mainly aimed at promoting that State’s cooperation in the future. On the other hand, if Kenya withdraws before these procedures are completed, Nairobi would have less influence on the outcome and may be more likely to be criticized in terms it would find uncomfortable. In other words, Nairobi may be tempted to use the threat of withdrawal as a bargaining chip to secure a ‘better deal’ in terms of the outcome of ASP procedures. Both the Court itself and other States Parties have in the past often shown willingness to accommodate Kenya’s demands, and there is presently little political will among other State Parties to add pressure on Kenya.

Additionally, during the recently conducted ASP, there was a notable change of tone concerning the possibility of finding some form of compromise to ICC rules on immunity of State Officials. So far, the Court’s understanding has been that Heads of States subject to ICC arrest warrants enjoy no immunity whatsoever, resulting that other States have an obligation to arrest and transfer them to the Court if present on their territory. As Dapo Akande notes, the issue been a “particularly toxic one” in the relations between the African Union and the ICC. If remaining within the ICC system, Kenya may be offered a chance to take the lead on potential reforms, which could be portrayed as a significant diplomatic victory given Nairobi’s intensive campaign on the issue.

It is also important to keep in mind that Nairobi remains uncomfortable with the fact that the ICC is pursuing three Kenyans on charges of witness interference. If taken forward, these cases could potentially implicate persons closely associated with Kenyatta and Ruto. A withdrawal would not change Kenya’s legal obligations under the Rome Statute to transfer the three Kenyans subject to arrest warrants to the Court, but Nairobi could use it as the ultimate explanation why it will not engage the Court further on these cases. Yet, Kenya has already indicated its reluctance to hand over the suspects and there are no signs that the Court is currently actively pursuing the cases. Although a potential withdrawal would make it even harder for the ICC to enforce the outstanding arrest warrants, it could possibly make Court officials reconsider the current ‘go quiet’ strategy.

Further, Nairobi has managed to maintain ‘normal relations’ with key actors in the West even at the time when Kenyatta was due to stand trial at the ICC. Undoubtedly, European diplomats are now urging Kenya to stay with the ICC. Even if it is unlikely that ‘hard sanctions’ will be associated with a withdrawal, it would surely frustrate some European capitals if Kenya proceeds to withdraw. Nairobi recently demonstrated new willingness to defy major powers in the West when it decided to pull out its forces from a peacekeeping mission in South Sudan. However, creating tensions with European capitals over a withdrawal from the ICC could simply be seen as not worth the price in the current context.

A withdrawal would also complicate an already complex domestic situation. As the Kenyan Government earlier on secured a mandate from Parliament to withdraw, it could argue it has a democratic mandate to do so. Yet, Parliament’s motions calling for the government to pull out of the ICC were passed at a time when the ICC pursued charges against Kenyatta and Ruto, and were arguably mainly symbolic measures aimed at showing support for Kenyatta and Ruto at the time. There is currently significant resistance both in civil society and the political opposition to a withdrawal. Some opposition leaders claim a withdrawal would demonstrate Kenyatta and Ruto’s ‘plan to rig’ the elections scheduled for 2017. Should the Kenyan government – already under significant pressure domestically for its failure to take meaningful action on grand corruption – opt to withdraw before the election, this could re-open the debate about how Kenyatta and Ruto used the government machinery to fight the ICC and to advance their personal interests.

Most observers suspect it is a question of when, not whether, Kenya will withdraw from the ICC. There is little doubt that Nairobi is seriously considering it. But it is also clear that a wide range of factors will inform the calculus, some of them creating significant incentives for Nairobi not to withdraw, at least immediately. For now, the most likely scenario may well be that Kenya uses the threat of a withdrawal as leverage. 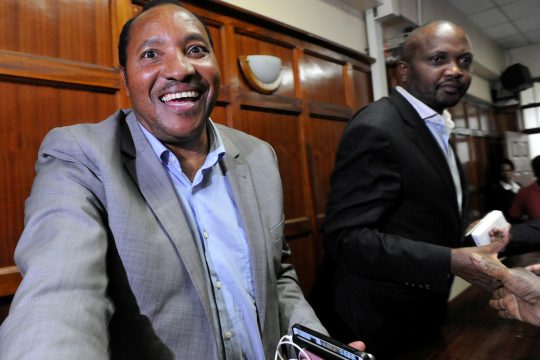 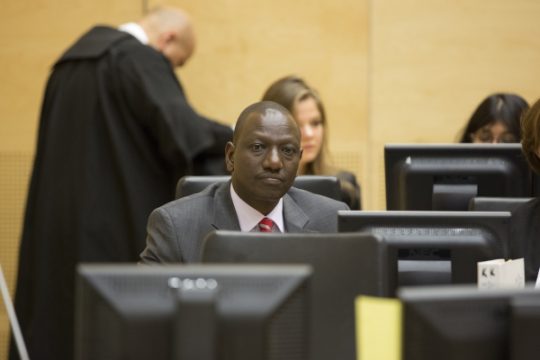 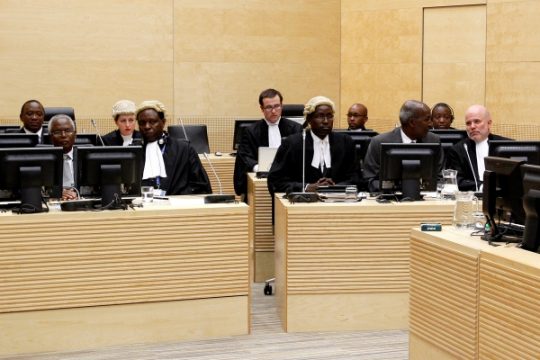 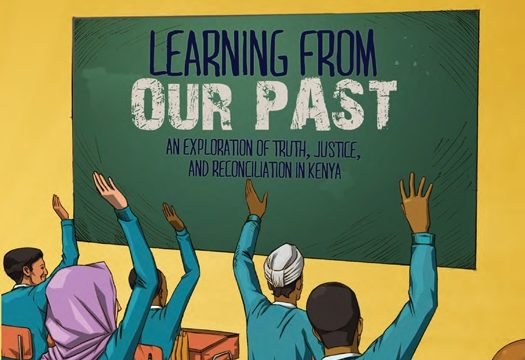