On December 15, the lawyer for Jean Ping, recent candidate in Gabon’s elections, filed a complaint to the Prosecutor of the International Criminal Court (ICC) accusing the Gabonese authorities of crimes against humanity. This comes after the Prosecutor opened a preliminary examination at the end of September at the request of the government.

This is the saga of Ali Bongo versus Jean Ping. The two candidates in Gabon’s August 2016 elections have decided to prolong their battle through the ICC. Bongo’s proclaimed victory, contested in the streets by supporters of Ping, resulted in violence, the exact toll of which is not clear. On December 12, European Union observers said there had been “anomalies” which cast doubt on “the final result of the election”. Diplomat Jean Ping launched the first salvo, shortly after the poll results on August 31, threatening to take his rival to The Hague. But the unsuccessful candidate was taken by surprise on September 21 when the Gabonese authorities asked the ICC to open investigations into “crimes against humanity” and even “incitement to genocide” committed by him. They allege that Ping, during a rally, called on the crowd to “get rid of the cockroaches”, with the intent of “eliminating part of the Gabonese population”. As a result of the government’s request, the Prosecutor opened on September 29 a preliminary examination which looks like just a formality.  A preliminary examination, which comes before the opening of criminal investigations, has limited judicial significance and the Prosecutor can keep it open without ever opening formal investigations. In the past 10 years, the ICC’s Office of the Prosecutor has opened around a dozen preliminary examinations, in Afghanistan, Colombia, Ukraine, Palestine and elsewhere. They allow the Court to claim a certain universality and so try to combat accusations that it is targeting only African leaders. These preliminary examinations are also meant to serve as a kind of Sword of Damocles, a warning that if the crimes persist or if their perpetrators are not brought to justice in national courts, the ICC will step in. When the request comes from a State, the Office of the Prosecutor opens an examination almost automatically. If there is a Gabon case before the ICC, it is at the request of the Gabonese government. The irony is that by seizing the Court, Ali Bongo has opened the way for his rival.

Support for the Court?

So the two enemies are quits. In the complaint filed to the Court on December 15, Ping’s lawyer – who is also defence lawyer for Ivorian ex-president Laurent Gbagbo – accuses the Gabonese authorities of crimes against humanity. “The Gabonese authorities launched a planned attack on the civilian population, especially on August 31, 2016 in Libreville,” aimed at keeping Bongo in power and “suppressing democratic expression by the people”, says lawyer Emmanuel Altit in a communiqué. Reacting on Radio France Internationale, Gabon’s Communication Minister Alain Claude Bilie By Nze called this a “tissue of lies” but said he was glad it might now be possible “to see the mass graves that Mr. Ping claims to have seen in Gabon. Finally we will see how he intends to document all that”. The minister also used the occasion to attack the unsuccessful candidate, saying Ping “wanted to take power through demonstrations and violence”. Whilst the post-election violence does not constitute either war crimes or crimes against humanity, and clearly not genocide, the two candidates are nevertheless not hesitating to throw accusations of mass graves at each other, without concern for those killed or disappeared in the violence, or for their friends and relatives.

At a time when three African States – South Africa, Burundi and Gambia – are pulling out of the ICC and others such as Ghana, Kenya and Namibia are calling on the Court to stop targeting only Africans, Gabon may give the impression of moving against the tide. During the ICC Assembly of States Parties in November, some rushed to see Gabon’s request as a mark of support for the Court. That is obviously not the case. These moves are far from proof of support for its mission, but merely a desire to use the ICC. As of 2009, Jean Ping has not hesitated to criticize the Court for targeting Africa too much. “Why is there nobody else to try except Africans?”  he asked in 2011 when he was head of the African Union Commission, mentioning crimes committed in Iraq, Afghanistan, Sri Lanka and Chechnya. But now, just as the Prosecutor is trying to pull gradually “out of Africa”, the former Gabonese foreign minister is apparently trying to pull her back. 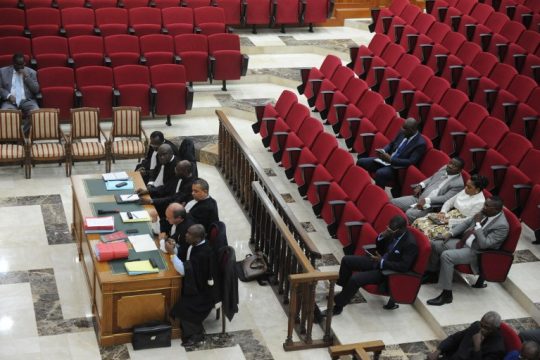