For its first mission outside the capital Bamako, Mali’s new Truth, Justice and Reconciliation Commission has chosen Timbuktu, where destruction of religious monuments three years ago have been classed as war crimes for the first time in the history of international justice.

The Commission headed by former minister Ousmane Oumarou Sidibé arrived in the “City of 333 Saints” on Thursday November 19. There it is to introduce its 15 members to local authorities and meet victims of the crisis. In the course of its 10-day mission to Timbuktu in northern Mali, the Commission will also hear suggestions from the people on how it should conduct its work.

Timbuktu was not a random choice.

The city is a major spiritual, intellectual and multicultural crossroads for all the people of the Sahara (Arabs, Touaregs, Songhaï, Peuls). From May 2012 to January 2013 it was occupied by Jihadists, forcing nearly half of its 55,000 inhabitants to flee to southern Mali or to Mauritania.

Those who remained will never forget what they suffered during those months of occupation. The Jihadists of Aqmi (Al-Qaïda in the Islamic Maghreb) and Ansar Dine imposed Sharia law, including amputation of body parts, public floggings, forced marriages, a ban on listening to music and the radio, and closure of public schools.

“Families were ordered to disconnect the satellite dishes that allowed them to get foreign television stations,” a witness told French weekly l'Express. “Men had to roll their trousers above the ankle, as did companions of the Prophet, according to tradition.

“Women were the first targets of the Jihadists. In the street, they had to wear a large veil and cover their hair. They were forbidden to talk to men who were not members of their family and were even supposed to turn their backs. In the market, they were told to wear gloves when handling money and only take goods from the hands of male traders.”

The Jihadist occupiers turned the same zeal on the cultural heritage that is the pride and identity of Timbuktu, listed as a world heritage site by UNESCO. They destroyed mausoleums and historic monuments, and burned piles of important ancient manuscripts. For them, the cult of the saints buried in these mausoleums is “haram” (meaning forbidden in Arabic), as the devoted should invoke only the Prophet.

One of the Jihadist leaders behind the occupation, Ahmad Al Faqi Al Mahdi, has been held since the end of September by the International Criminal Court (ICC) on suspicion of war crimes. He was the first person arrested in the ICC investigation into the situation in Mali, opened in early 2013 and focusing on abuses by Jihadist groups linked to Al-Qaïda. He is also the first suspect accused by the ICC for destruction of religious buildings and historic monuments.

Al Faqi, born around 1975 in Agoune, 100 kilometres west of Timbuktu, was one of the individuals most active in the occupation of the city, according to the office of the ICC Prosecutor. Up to September 2012, he allegedly headed the “Hesbah” (“Behaviour Brigade”) that was operational from May 2012. He is also alleged to have participated in the work of the Timbuktu Islamic Tribunal and in the implementation of its decisions. In particular, he is accused of involvement in the destruction of several mausoleums mentioned in his arrest warrant.

Al Faqi’s confirmation of charges hearings are due to start on January 18, 2016, according to the ICC calendar.

The day after Al Faqi’s transfer to the ICC prison in The Hague, Netherlands, UNESCO Director-General Irina Bokova stressed the gravity of his alleged crimes. “The cultural heritage of Mali belongs to all humanity,” she said. “It is vital that the criminals be brought to justice. This is justice for Mali, the identities and history of its people – this is justice for all women and men everywhere," she added. Bokova also stressed that this is “the first such case and it breaks new ground for the protection of humanity’s shared cultural heritage and values."

Two months earlier, Bokova visited Timbuktu and the eight mausoleums rebuilt with the help of funding from her institution. “This heritage is a source of strength and confidence for the people of Mali as they consolidate the foundations of peace,” she said. 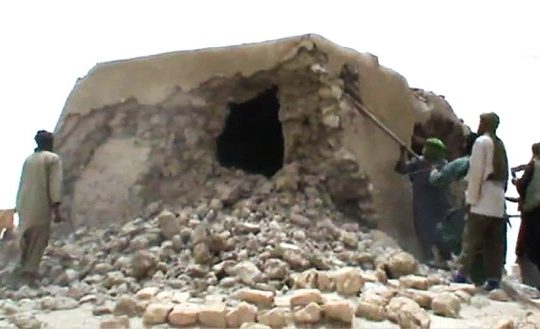 Ephrem Rugiririza and Studio Tamani
All reports from this author
Ephrem Rugiririza is Deputy Editor-in-Chief for Africa of JusticeInfo.net. He has been covering transitional justice issues for more than 20 years. He began his career in 2001 as a correspondent for Rwanda’s Judicial Diplomacy magazine for which he covered genocide trials before the traditional Rwandan Gacaca courts. Two years later, he joined Fondation Hirondelle as a journalist at the Hirondelle News Agency, then based at the headquarters of the International Criminal Tribunal for Rwanda (ICTR) in Arusha, Tanzania. He became editor-in-chief in 2009, before taking part in the creation of JusticeInfo.net in 2015. Ephrem Rugiririza also collaborates with other international media such as the Agence France Presse (AFP). He has also been a correspondent for Reporters Without Borders (RSF) in Tanzania.