Former Guatemalan Interior Minister Carlos Roberto Vielmann, 60, has gone on trial in Spain for the assassination of eight detainees in 2006. The trial before Spain’s highest court for cases of terrorism, genocide and crimes against humanity is expected to last two months. Vielmann could face a sentence of 160 years’ imprisonment (20 for each assassination) and payment of 300,000 Euros compensation to victims’ relatives.

Vielmann obtained Spanish citizenship in 2010 and has dual nationality. Since the beginning of the trial, he has denied the allegations against him.  “I have nothing to do with the suspected executions of the prisoners in question,” he told the court. “I have had personal and professional success all my life, I have a united family, I sacked 1,200 police officers and broke the cycle of corruption in my country. So I would hardly sully my reputation just to kill 7 prisoners!” He did not mention the death of an eighth prisoner, Edwin Santacruz. The prosecution is nevertheless convinced that he was the brains behind a “criminal organization” that was parallel to the State and whose aim was “pure and simple liquidation” of individuals deemed undesirable.

Paradoxically, Carlos Vielmann’s political career took place in a context of moderation in Guatemala. In July 2004, the conservative Oscar Berger came to power after decades of turmoil in this small central American country, especially a civil war that more than 30 years (1960 to 1996) and claimed at least 200,000 lives. Berger announced a “government of entrepreneurs”, which lasted until 2008, and named businessman Vielmann, former head of Guatemala’s Chamber of Commerce, as Interior Minister. Vielmann projected a public image of probity and encouraged the creation of the CICIG, a UN commission set up to shed light on the most serious crimes committed since the 1960s, including the case of former general Efrain Rios Montt.

The new Interior Minister promised to “eradicate” drug trafficking and stop the “gangs that control it”. Their main stronghold was the Pavon prison in the department of Fraijanes, which was said to have been taken over by an organization calling itself the “Committee for Order and Discipline”. On September 25, 2006, Vielmann, with all the media backing him, launched an assault on the prison to “disable” the gang. That attack, led by the National Civil Police (PNC) and the army, is at the heart of the trial in Madrid. According to the prosecution, the hidden aim of the operation set up by Vielmann was “execution” of the gang leaders. Seven of the detainees were liquidated the same day and the eighth on November 3 after managing to escape.

This trial of Carlos Vielmann in Madrid in fact goes beyond the assassinations themselves. What is at stake, according to the public prosecutor, is to determine whether the former Interior Minister had created a sort of “parallel paramilitary body”. That is the conviction expressed by the Costa Rican Francisco Dall’Anese, who headed the CICIG up to 2013. “Vielmann had set up and was a member of a criminal organization with the national police at its heart, dedicated to murders, drug trafficking, money laundering and kidnapping,” he said. Philip Alston, who was given a special UN mandate to investigate these troubling events, expressed similar views four years ago. According to him, Vielmann’s obsession was to carry out a big “social clean-up” , in other words to wipe out in the most radical way the most dangerous prisoners, the gang leaders, drug traffickers and prostitutes. Vielmann himself boasted of having “resolved” some 500 cases of kidnapping and 90 attacks on banks but always “in a legal and proper way”.

This trial in Spain could be somewhat misleading. One might at first think it stems from the well-known zeal of Spanish magistrates acting on the principle of “universal jurisdiction”. One could hardly forget the spectacular arrests ordered by magistrates such as Baltasar Garzon, like that of Pinochet in London, or the extraditions to Spain of former torturers in the Argentine dictatorship like Scilingo or Cavallo. However, after the socialist Zapatero came to power in 2009, and then the conservative Rajoy in 2014, Spanish governments have in recent years legislated to restrict sharply these prerogatives – mainly to avoid diplomatic conflicts with China, Israel and the United States.

There will no longer be any trials for alleged genocide and serious human rights abuses in Tibet, Palestine, El Salvador or relating to the civil war in Guatemala. Spanish judges are now powerless with regard to these kinds of crimes, unless the suspected perpetrators have Spanish nationality or reside permanently in Spain. This is the case for Carlos Vielmann, who took advantage of the fact that he has two Spanish grandfathers to take Spanish nationality and flee justice. It has nevertheless caught up with him.

Vielmann was the boss of former Guatemalan police chief Erwin Sperison, who was sentenced to life imprisonment in Geneva, Switzerland, in 2015, for similar facts. Sperison has dual Swiss-Guatemalan nationality. 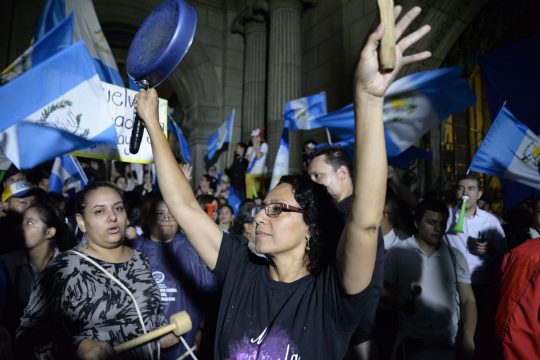