On 14 March 2012, Thomas Lubanga Dyilo (Lubanga) was found guilty before the International Criminal Court (ICC) for the war crime of conscripting or enlisting children under the age of 15, and using them to participate actively in hostilities in the Democratic Republic of Congo (DRC). This was the first conviction for the ICC and an important step in the international condemnation of the use of child soldiers. With this conviction came a sentence of 14 years in prison for Lubanga and the hope of justice for his victims – children as young as 11 who were forced to fight and die, brutalise, be sex slaves, or conduct other tasks in support of the rebel group.

Justice for these former child soldiers (FCS) was to come in two forms: retribution and reparation. Therefore, conviction and punishment of the perpetrator was only a part of the justice to be rendered. Additionally, in an attempt to make international criminal law more responsive to the needs of the victims of atrocity crimes, the Rome Statute establishing the ICC included a reparations regime to compensate victims of crimes prosecuted before it. Reparations, awarded by the ICC to the victims of Lubanga’s crimes, are grounded in the idea that compensation paid to the victim of a wrongful injury is also a significant form of justice, in some way making amends for the injury suffered. The Lubanga case represents the first ICC case in which reparations were ordered and the first instance in which the ICC’s Trust Fund for Victims must develop an implementation plan.

The FCS of the DRC deserve justice. They suffered great injury during their time with the rebel group, and they often continue to suffer long after they left the bush, as a legacy of their time as child soldiers. Their suffering continues for a variety of reasons, including reintegration challenges. Reparations awarded to FCS are intended to secure justice for them and to help with their reintegration into their communities. The question is whether they can achieve these goals.

As it is the first of its kind, it seems important both for the sake of justice and for the reputation of the ICC that this first implementation of reparations be fair and appropriate, and be perceived to be. The dilemma is that despite the great hopes for this more victim-centric approach to accountability for atrocity crimes that the ICC is taking, the reparations mandate, when applied to contexts where the victims include FCS, has not only the potential to relieve some suffering, but also the potential to exacerbate tensions and compound the challenges of reintegration and acceptance of FCS because of their complex victim status.

The challenging nature of this first implementation of the ICC’s reparation mandate is a problem, not only for individuals and communities in the DRC, but also for the ICC and the reparations mandate itself.

The reintegration of FCS into the community is important for both the well-being of the society as a whole, and the FCS themselves. Unfortunately, FCS often face difficulties in reintegrating, for reasons of physical and psychological health; lack of education, skills training, or resources; and also social reintegration problems based on the stigma attached to being a FCS.

Particularly, regarding reception by communities, society members often receive FCS with ambivalence. This ambivalence is reflective of the tensions that community members feel, between compassion and resentment, between wanting to put the past behind them and wanting past harms acknowledged and addressed, and between recognising the need to allow these young, victimised perpetrators to get the help they need to be constructive members of their society and the mistrust and uncertainty some community members feel about the nature, past acts, and future tendencies of these former fighters.

Reintegration of FCS is difficult partly because, despite general acceptance of the abstract idea that the children were victims of the war, as individuals they are often stigmatised for the brutality and destruction caused by the civil conflict. This hostility can manifest in isolation, name-calling, or physical assaults.

What I found from my research on the reintegration of FCS, which included field research in the similar context of northern Uganda, was that FCS have many stories about the poor treatment they received from community members when it was known that they had returned from the bush. Despite a promulgated law that prohibits harassing or attacking returnees, FCS are still targets of verbal and physical violence in their communities.

There is also evidence of resentment towards FCS for any advantage that they receive in terms of medical care, education, or material resettlement packages. While child soldiers require extra assistance because of the challenges they face, they are not the only ones in the war-ravaged societies that are in great need, and their access to unique assistance based on their FCS status can bring with it increased resentment and hostility.   Reparations for Lubanga’s FCS are to be collective in nature, both symbolic and service-based. While the symbolic reparations are specifically meant to counteract negative perceptions and reception of FCS in their society, the service-based reparations offer assistance such as training – services of a nature already often resented.

The Challenges of Repairing Victim-Perpetrators

While there is strong and growing support for the belief that justice requires reparations for victims, this first case is a challenge because child soldiers fall into a category of what can be called 'complex victims', who are themselves often seen as perpetrators of atrocity as well as victims of it. In the Lubanga case, reparations were ordered to accompany Lubanga’s conviction of the only crime of which he was charged, that of enlisting and conscripting child soldiers. Therefore, the only victims for whom reparations are to be awarded in this very first implementation of the reparations mandate are victim-perpetrators, despite the many victims of the atrocities committed in the Eastern region of the DRC.

Reparations in this context ask all of us (including other victims) to revisit the paradox that confuses our understanding of words like "perpetrator", "victim" and "innocence", and reparations have the potential to assist or hamper the reintegration prospects of this vulnerable segment of the post-conflict environment.

The Lubanga reparations’ acknowledges that FCS are often faced with victimisation and discrimination based on their former child soldier status, and the possible risks for the beneficiaries of reparations. It orders that the collective reparations plan aims to aid in their reintegration. There is little room, however, for a solution that can avoid the risk that these reparations plans could cause further challenges for the FCS and exacerbate already difficult reintegration.

There is already a particular challenge involved in meeting the needs of the FCS, and securing justice for them for their victimisation (that is, their recruitment and treatment), while at the same time acknowledging and respecting the needs and conceptions of justice of other victims within the community – many of whom suffered direct harm as a consequence of the conflict and the actions of child soldiers. ICC reparations in the Lubanga case, because of the moral and legal imperative of matching reparations with convictions, seem unable to even attempt a balance.

Details of the reparations are still being worked out. In , the ICC approved and ordered the implementation of symbolic reparations, but the issue of non-symbolic reparation programmes is still not finalised. While many individual FCS would have preferred individual reparations to collective reparations, something representatives advocating on the FCS’ behalf fought for and which might have relieved more personal challenges and also invited more resentment, even collective reparations have the strong potential of inflicting as much harm as good. While possibly offering some needed assistance, although even this is disputed, collective service-based reparations can reintroduce or heighten resentment and stigmatization.

Difficulties for the ICC’s Reparations Mandate and Legitimacy

The ICC is unique in international criminal law in its attempt to incorporate a reparative function in what is generally a purely retributive process. In many ways it would seem that this function of the ICC would resonate well with the communities involved in situations where the war crimes of enlisting and conscripting child soldiers prosecuted by the ICC were perpetrated, namely in northern Uganda and the DRC. In these communities, reparative justice is often a feature of their local practices.

However, it is also possible that the reparations mandate will not be well-received, because in these contexts the reparation orders award compensation (they may also be awarded other forms of reparation, other than compensation), to victims who are also considered perpetrators of atrocity, or at least not more deserving than other victims.

In some ways, despite the attempt of the ICC to transcend the limitations of western law and its retributive nature by including restorative elements, it might seem that the ICC is still a far way from responding and appealing to local conceptions of justice. The ICC reparations mandate, at least when applied to contexts where the victims include FCS, might be seen as evidence of this. At a time when there are pronounced challenges regarding the legitimacy of ICC intervention in Africa (some African countries have expressed concerns while others have pursued acts to formally withdraw from the ICC), it is unfortunate that the first crime the reparations mandate must address is one so riddled with complexity and possible negative effects, in stark contrast to its potential.

The compounded trouble with the first implementation of the ICC’s reparations mandate is that its potential for exacerbating the challenges of FCS reintegration in the African context could also add to the challenges the ICC is currently facing on the continent.

The Trust Fund for Victims (TFV) is an organ of the ICC, with the mission to support and implement programmes that aim to aid victims of crimes within the jurisdiction of the Court.

The TFV has two pillars:

and 2) to provide assistance to support victims and their families. 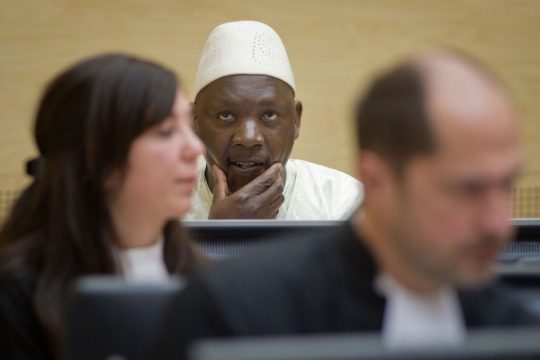 “Who can put a price on a lost youth?” asks Congolese child soldiers’ lawyer
Democratic Republic of Congo : Related articles