Judges at the International Criminal Court may Friday award the tribunal's first monetary sums to victims of war crimes, with lawyers estimating some $16.4 million in damages were caused by a 2003 attack on a Congolese village.

Friday's order for reparations for 304 victims of former Congolese warlord Germain Katanga is set to be a landmark step for the world's only permanent war crimes court.

"Reparations should place the victim in a situation as close as possible to that before the crime was committed," Fidel Nsita Luvengika, the legal representative for victims, argued in a 2016 filing to the court in The Hague.

Katanga was sentenced by the ICC to 12 years in jail in 2014, after being convicted on five charges of war crimes and crimes against humanity for the February 2003 attack on Bogoro village in Ituri province.

Some 200 people were shot or hacked to death with machetes in the attack.

Legal representatives have estimated a minimum of $16.4 million in damages was caused, and it may be as high as $24.7 million, even if the "victims are not demanding this sum".

- 'Justice not just in courtroom' -

Katanga, 38, now on trial in the Democratic Republic of Congo on other charges of war crimes and insurrection in the mineral-rich Ituri region, is liable for any compensation.

The judges could decide to order collective reparations for projects to help the community, as well as individual damages to victims.

"It may bring the prospect of some redress for the victims," said Pieter de Baan, director of the Trust Fund for Victims, arguing it was important to show justice "doesn't stop in the courtroom".

"For the system as a whole, it's really important to spend time building a process in which you don't only get convictions, but you also get decisions which go to the benefit of the victims," he told AFP.

The Trust Fund for Victims (TFV) is an independent body set up under the ICC's founding guidelines, to support and implement programmes to help victims.

If Katanga cannot pay any reparations then the TFV could decide to dip into its funds, accumulated by voluntary contributions from member states. But it only has $5 million available, of which one million has been set aside for the case of Thomas Lubanga.

The 2016 filing on behalf of Katanga's victims sets out a detailed list estimating cost of the loss of life, goods and property, as well as for services such as counselling.

Lawyers have also sought to place a monetary value on the loss of a parent or relative, on whether a victim was raped, maimed or robbed of their livelihood.

- Money won't bring them back -

"The reparations regime of the court is without real precedent," said De Baan. "It's not science. It's basically trying to reach an estimation of what the harm has been in relation to the crimes."

The case of Lubanga, another Congolese warlord sentenced in 2012 to 14 years for conscripting child soldiers, was the first to see some kind of ICC compensation award.

In October, judges approved "symbolic reparations" to create a "living memorial" to remember and raise awareness about child soldiers.

But a final decision on collective reparations for Lubanga's victims is still awaited.

He told AFP the local Hema community would rather one of the hearings in Katanga's current trial in the DRC "be held in Ituri and that a public apology is made."

Katanga's "brothers in arms continue to commit atrocities in the region," he said, adding: "For us the biggest reparation of all, would be if Germain and his men would stop carrying out murders, massacres and pillages on the population."

Aid workers say they hope some money will go towards long-term projects such as building roads, health centres and schools.

"Given that today the victims and the executioners are living together, we must help people reach a real reconciliation," said Jean Bosco Lalo, coordinator for the local group, the Ituri Civil Society. 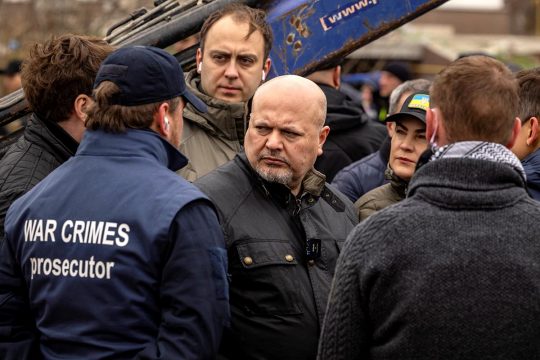