Amid the chaos in Libya, the International Organization for Migration (IOM) in April denounced a veritable “slave market” where migrants are being sold for forced labour or sexual exploitation. But will the ICC investigate?

A few weeks later, after a surprise visit to Libya, UN High Commissioner for Refugees Filippo Grandi said he was “shocked to discover the difficult conditions in which refugees and migrants live”, and denounced the “terrible” conditions in refugee centres in Libya. The two organizations launched a humanitarian programme for the 600,000 migrants, refugees and displaced people in Libya. NGOs such as Médecins sans frontières, Amnesty International and Human Rights Watch have for months been denouncing the crimes being committed.

Echoing these expressions of alarm, International Criminal Court (ICC) Prosecutor Fatou Bensouda declared on May 8 that “crimes, including killings, rapes and torture, are alleged to be common place” in Libya’s refugee holding centres. Presenting her latest report on Libya to the UN Security Council, Bensouda said her office was “carefully examining the feasibility of opening an investigation into migrant-related crimes in Libya”. Italy, which is the first port of entry for migrants from Libya, hailed her proposal. “Not only must trafficking be stopped, but traffickers must also be brought to justice and punished,” said Italian ambassador to the UN Sebastiano Cardi. “The slavers of the twenty-first century, as then Foreign Minister Gentiloni put it in November 2015, must be brought to justice, including at the international level where appropriate.” But other countries did not express great enthusiasm, and simply took note of the Prosecutor’s declaration. In her previous reports to the UN, Bensouda had already raised the issue, expressing concern that migrant trafficking may be a source of funding for armed groups. Libya’s representative to the UN in New York defended his country. “Had it not been for the presence of criminal networks in countries of origin and destination, transit countries would not have to experience such crimes and violations,” said Elmahdi Elmajerbi. And, echoing accusations by the Catania prosecutor who claims European NGOs rescuing migrants around the Mediterranean are complicit with human traffickers in Libya, he added: “We hope to see mention by the Prosecutor in future reports of Court efforts to fight human trafficking networks in both the north and the south of the Mediterranean equally.”

The limits of the Libya case

Apart from condemning atrocities, what can the ICC really do? The Prosecutor, in numerous reports and again in early May, regrets that she does not have enough funds to conduct investigations. The Court, which has allocated nearly 11 million Euros to the Libya situation since 2011, tried to convince member states in New York to contribute more money.  In 2017 the Prosecutor, who says Libya is one of her priorities, increased her Libya investigation budget from 790,000 to 2.3 million Euros. But as of 2011, her investigations have been complicated by a difficult security situation in the country. Whilst the Prosecutor hails the cooperation of her colleague in Tripoli and the government of Fayez Al-Sarraj, supported by the UN but opposed by General Khalifa Haftar, she says she cannot send her investigators to Libya. The Court has been trying for years to get Tripoli’s signature on an immunity agreement for its employees, but  cooperation with Libya has its limits. However, Mark Kersten, author of the book Justice in Conflict, says that in the case of Libya “it hasn't been necessary for the ICC to be on the ground with investigators. Whilst we may never know how strong the OTP's cases against al Senussi and Saif al-Islam Gaddafi are, the warrants of arrest against them were issued without ICC investigators having access 'on the ground' in Libya”. The ICC has thus issued arrest warrants against four leaders in the Gaddafi regime. “That being said,” Kersten continues, “I think for the time being, the Prosecutor's statement should be read as an example of her expressive power and thus signalling that her office is watching. Her statement thus act as more of a warning than a guarantee of action.”

In New York, the ICC Prosecutor has often called for coordination and information sharing. On May 8, she hailed cooperation with the United Nations Support Mission in Libya (UNSMIL) and the European Naval Force in the Mediterranean (EUNAVFOR MED). But these new declarations support the impression that since the fall of the Gaddafi regime, the ICC Prosecutor’s office is hit by the Libyan mess and has limited means. On May 8, Bensouda again denounced “abuses” committed by the State and by armed groups such as Daech, Ansar Al Charia and the Libyan National Army of General Khalifa Haftar.

Mohammad Hadi Zakerhossein, researcher at the University of Tilburg, doubts that the Court has juridiction over crimes against migrants in Libya. He reminds us that New York referred to the Court “gross and systematic violations of human rights including the repression of peaceful demonstrators” since February 15, 2011. “Exercising jurisdiction over a situation that has affected a part of a territory does not imply that the prosecutor can investigate all other crimes unrelated to the given situation that happens in other parts of a country,” he writes on the website Justice Hub.

Bensouda has made many declarations to the UN Security Council in New York, but so far her only visibly stable line of prosecution is against former members of the Gaddafi regime. In 2013, she signed a memorandum with the Libyan authorities on “task sharing”, under which the ICC would deal with pro-Gaddafi people in exile. Just before submitting her report in New York, the Prosecutor unsealed an April 2013 arrest warrant against Mohamed Khaled Al-Tuhamy, head of internal security during the 2011 war. Egpyt hosted him in exile for a long time, without ever arresting him or transferring him to the ICC. During presentation of the Prosecutor’s previous report in New York in November 2016, Cairo expressed full support for the ICC, calling on States in the region to cooperate! The suspect, Mohamed Khaled Al-Tuhamy, is now back in Libya, according to the Prosecutor. Up to now, the Libyan authorities have only offered a semblance of cooperation with the Court, signing certain things, justifying inaction by the reigning chaos and saying at the same time that their national courts have the capacity to try suspects. This claim was validated by ICC judges in the Senoussi case in summer 2014, just as the country was sinking into chaos.

Gaddafi’s ex-intelligence chief Abdullah El Senoussi, who was tried with some 30 other dignitaries of the former regime, was sentenced to death in July 2015, but his sentence has not yet been carried out. In February 2017, the United Nations mission in Libya denounced what it called an unfair trial, but the ICC Prosecutor explained in New York that she had not finished studying the report. It should logically lead to a reactivation of the ICC arrest warrant for Senoussi issued in spring 2011. At the end of May, the Al Hadhba prison, where he was detained, was seized from Fajr Libya Islamist rebels, who took Tripoli in 2014, by an armed group close to the National Union Government in place since March 2016. More than six years after she launched investigations, the ICC Prosecutor has still not issued any public arrest warrants against the rebels of 2011. Some have joined the different armed groups fighting each other in Libya today. By fully taking up the 2011 conflict, the Prosecutor could bring into her net those responsible for crimes being committed now, including those against migrants in Libya. 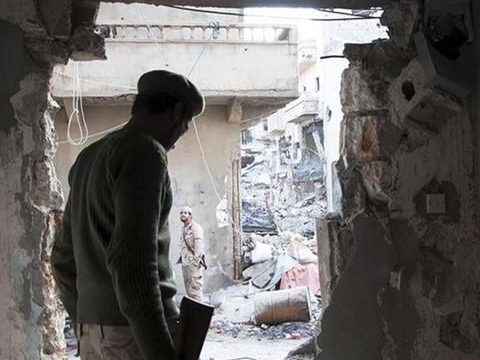 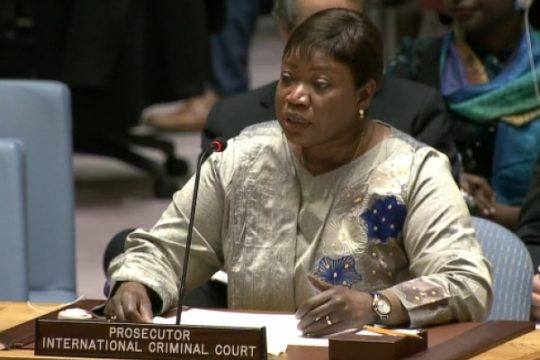