Gabon authorities said Saturday that they were investigating threats by a critic of President Ali Bongo, including an ultimatum to step down before the arrival of an International Criminal Court team next week.

The threats included a warning that government buildings had been set with explosives, and came as armed men stormed the offices of several media outlets on Friday demanding the broadcast of an audio and video message urging Gabonese citizens to revolt.

The ultimatum was made by Roland Desire Aba'a Minko, a supporter of opposition leader Jean Ping, who was narrowly defeated by Bongo in presidential elections last year.

The ICC team is set to arrive for a two-day visit Tuesday for a preliminary investigation of claims of post-election violence by Ping and 15 nongovernmental organisations.

Ping's camp distanced itself from Minko's actions, deploring the "confusion" they caused.

Minko was detained by police after a public speech in Libreville in which he told Bongo to quit within 72 hours, threatening to set off explosives that had been set in "all administrative and ministerial buildings".

A "security incident" was also reported at the office of the European Union delegation in Libreville after an individual gained access and issued threats, though he was quickly detained by the police, the delegation said Saturday.

State prosecutor Steeve Ndong Essame Ndong said he had opened an inquiry given the "extreme gravity of the declarations", in a statement published by the Union newspaper.

The ICC team will speak to officials in the interior, defence and justice ministries, as well as international organisations active in the capital.

Violence broke out four days after the election, and opposition figures say that more than 50 people were killed in the ensuing clashes.

The official toll was only three dead, and in a speech earlier this year Bongo played down the unrest as a "family quarrel". 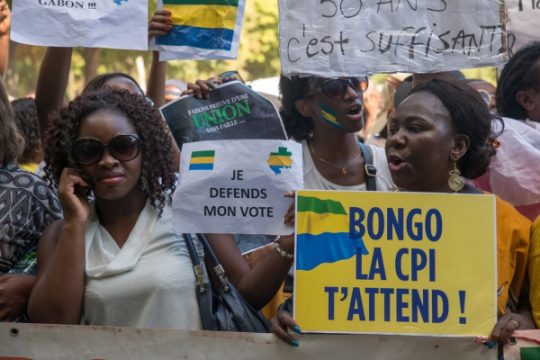