For the past two decades, Equatorial Guinea has been one of Africa’s largest oil producers and on paper, it is a middle-income economy. Yet instead of spending the country’s oil riches on improving life for ordinary Equatorial Guineans, the government has squandered its enormous wealth on questionable infrastructure projects – highways to nowhere, empty 5-star hotels – where corruption is rife. A new Human Rights Watch report has found that a combination of gross mismanagement and high-level corruption has left the country’s health and education sectors on their knees, and among the worst on the continent. And as Researcher Sarah Saadoun tells Stephanie Hancock, with oil production in the country already in decline, the government has little time left to reverse course.

Equatorial Guinea has the highest GDP per capita of any African country. What’s gone wrong?

About 20 years ago the country discovered oil, and virtually overnight it went from being one of the poorest countries in the world to one of the richest in Africa. But this has not transformed life for the average citizen, even though it’s a very small country, with only around one million inhabitants. This is most apparent in the country’s health and education sectors, where indicators like vaccination and school enrollment rates have actually gotten worse over the past 20 years, which is really remarkable.

And unless major new reserves are found, the country’s oil will run out in 2035. In fact, production is already in decline. This, coupled with low oil prices, means an economic crisis is kicking in and the country is now facing cuts.

Money has been siphoned off via infrastructure projects. How come?

It’s easy to hide money using infrastructure projects. You bill the government US$50 million for a building that only cost US$10 million. Who’s expert enough to tell if the government overpaid?

We spoke to one Italian businessman there who explained how simple it is. The government would award contracts to a company owned by the first lady, and the entire project would then be subcontracted to a company partially owned by the president’s son.

The contrast is so great – there are people living in tiny homes by muddy roads with no running water next to these enormous mansions.

How much money has the ruling family pocketed?

It’s difficult to estimate because of how opaque the government is, but various anti-money laundering investigations have given us a clue. In a court case involving the president’s son in South Africa, he actually told the court via affidavit that because government officials are allowed to own stakes in companies that bid on government contracts, “a cabinet minister ends up with a sizable part of the contract price in his bank account.”

We can also look at its budget. Equatorial Guinea’s total budget is around US$5 billion a year, and US$4 billion – about 80 per cent of that – goes to infrastructure. But in Sub-Saharan Africa, the average percentage spent on infrastructure is about 30 percent. So it’s spending way more than average.

The kicker is that a lot of these projects are what the International Monetary Fund (IMF) calls “prestige projects” – essentially they are white éléphants.

It’s hard to say, but the president’s son, Teodorin Obiang, has been the most conspicuous with his wealth.

The US Department of Justice prosecuted him for money laundering, and it estimated his global assets at US$300 million. That case settled with Teodorin forfeiting US$30 million, but he will go on trial in France next week for allegedly laundering €175 million. Switzerland has also just launched an investigation against him, seizing a bunch of supercars and a US$100 million yacht. He also spent almost US$1 million on Michael Jackson memorabilia, including US$275,000 on a Bad Tour glove. So he’s spending enormous sums.

What’s the most questionable infrastructure project that you uncovered in Equatorial Guinea?

There are so many it’s hard to know where to start. There’s this enclave that the government built called Sipopo, near the capital, Malabo. The enclave has a 5-star hotel and 52 villas built specifically for an African Union summit held in 2011 – one villa for each head of state. They maybe slept in them for three nights, and now they’re empty.

To access Sipopo, the government built an enormous six-lane highway. I actually drove down it, and I only saw two or maybe three cars during my 15-minute journey. One person who drove down another eight-lane highway told me it was entirely empty – the only people he saw were villagers drying their laundry on the tarmac.

Then there’s the new capital the government decided to build in the middle of the jungle called Oyala. They also built a lot of government buildings in Bata, which serves as an alternate capital. So now each ministry has three separate buildings for a population of 1 million.
Also, the country has five major airports. One tiny island of just 5,000 people, Annobon, has a US$112 million seaport, but no high school. It’s crazy.

What shocked you the most as you did your research?

It was the ostentatious display of wealth by the president's family and other officials in contrast to the poverty in the country.

Many people told me stories about the president’s son racing his exotic supercars on the highway. Others told me that many villages have a presidential palace and a helipad, even though President Obiang visits perhaps once a year.
The contrast is so great – there are people living in tiny homes by muddy roads with no running water next to these enormous mansions. I’m from New York City, so I’m no stranger to inequality, but this boggled my mind.

How have the country’s health and education sectors been stripped apart by corruption?

There are two main hospitals in Equatorial Guinea. One is a public hospital, but it’s not free and doctors won’t see you unless you pay. Then there’s a private hospital – built with public funds of course – but its fees are far too expensive for most people. I asked everyone I met if they used it and they would say: “I know it’s there, but for us, it is not there”.

Even if people can afford it, the quality of care in the public hospital is extremely poor: long wait times, poor training, lack of basic equipment. One nurse told me there are not enough gloves so she wears the same pair all day long. And most important, if you don’t have the money to pay, you just won’t be seen.

What about the schools?

One school we visited had actually just been newly renovated by an oil company and looked quite nice, but inside we found that there was no money for light bulbs, so not a single light was working. Other schools have no electricity.

One high school was in a filthy condition, with the ceiling falling down and bathrooms covered in human excrement. Classes are crowded, too; one teacher said he has a class with 105 students.

One of the most revealing things is that half of Equatorial Guinean children go to private schools. Public schools are so bad that even people with little money scrape together everything they have to go private. One man told me he’s so poor he drinks water directly from the river without boiling it first, because he can’t afford the fuel, but he sends his children to private school. Public education has failed them.

Are Equatorial Guineans angry about the corruption?

Many people seem resigned to it. But there are some very courageous people who refuse to accept this as reality and are struggling for change, but it’s incredibly difficult and voicing your opposition is very risky.

Why is corruption a human rights issue in Equatorial Guinea?

What we found—unequivocally – is that the government has violated its obligation to realize people’s right to health and education. This is not an easy argument to make in most countries – after all, governments have many legitimate spending priorities that can compete with one another for attention – but here the levels of corruption and waste are so extreme that it’s very clear. And it’s not just a fiscal problem, because the amount of money that is being siphoned off is actually hampering the government’s ability to deliver education, health and clean water to Equatorial Guineans.

It could be pressure from within. A lot of companies that the country badly needs to invest in it are wary of doing so because of human rights problems and corruption. Equatorial Guinea is suffering something of an economic crisis right now and that could go in two ways: it could make the situation much worse, but it could also mean the government suddenly needs these foreign investors and therefore has to tackle corruption in order to attract them.

How bad is the corruption in Equatorial Guinea?

Well, put it this way – corruption happens the world over, but Equatorial Guinea’s government has turned it into an art form.

This article was first published by Human Rights Watch. 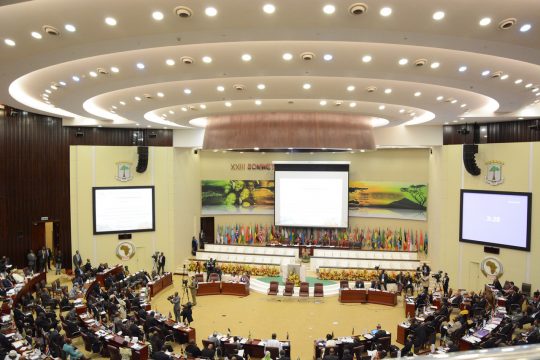 What prospects for an African Court under the Malabo Protocol?
Most read