The Myanmar government’s policy options for troubled Rakhine state are a choice between an army strategy focused on the 1982 Citizenship Law or implementing recommendations in the final report by the Annan commission.

The coordinated attacks by extremists on 30 police posts and a Tatmadaw (army) camp in northern Rakhine in the early hours of August 25 came as no surprise to many political observers and conflict analysts.

The attacks, which initially claimed the lives of 10 policemen, a soldier and two government officials, and also left dozens of extremists dead, followed a disturbing rise in tensions in northern Rakhine.

The escalation was expected because the Rakhine problem was not being handled with the right policy.

The Tatmadaw and the National League for Democracy government have different policies on northern Rakhine State. The Tatmadaw is advocating a security response and the rigorous application of the controversial 1982 Citizenship Law; the government’s approach is based on the recommendations of the Advisory Commission on Rakhine State. In its final report last week, the commission, appointed by the government in August 2016 and headed by former United Nations secretary-general Mr Kofi Annan, urged a review of the citizenship law and freedom of movement for all people in Rakhine.

In the aftermath of the latest attacks, the Tatmadaw has called for President U Htin Kyaw to convene a meeting of the 11-member National Defence and Security Council. The Tatmadaw wants the NSDC, on which it controls six seats, to exercise its authority to declare a state of emergency in northern Rakhine and place the area under martial law.

As well as martial law powers, the Tatmadaw’s policy for Rakhine, as occasionally outlined by Commander-in-Chief Senior General Min Aung Hlaing, calls for the application of the 1982 Citizenship Law, under which eligible residents can become naturalised citizens. The military says those who do not meet the criteria for citizenship should be declared illegal immigrants and detained in camps.

The 1982 Citizenship Law, enacted during the Ne Win dictatorship, provides for three categories of citizenship – full, associate and naturalised citizens. The law recognises as full citizens the descendants of residents who lived in Myanmar before 1823 or those born to parents who were citizens. Associate citizens are those who acquired citizenship under the 1948 Union Citizenship Law, and naturalised citizens are those who lived in the country before independence on January 4, 1948 and who applied for citizenship after 1982. One of the obstacles to citizenship for those who identify as Rohingya is that their community is not among the country’s 135 officially recognised ethnic groups considered “indigenous” and therefore eligible for full citizenship.

If the citizenship law was applied to Muslims living in northern Rakhine’s Maungdaw Township, the vast majority could face the prospect of being declared illegal immigrants and sent to refugee camps. They would likely share the same fate of the estimated 100,000 Muslims who have been held in camps for the internally displaced in and around the state capital Sittwe since the state was wracked by communal violence in 2012.

Needless to say, the application of such a policy would not resolve the situation in Rakhine.

Former military governments and the administration of President U Thein Sein were unsuccessful in their attempts to solve the Rakhine problem and their failures contributed to the grim situation in the north of the state today. It is difficult to understand why the Tatmadaw leadership continues to prefer a policy based on the application of the 1982 Citizenship Law, when it has clearly not been effective.

The policy approach adopted by the NLD government and State Counsellor Daw Aung San Suu Kyi is based heavily on the recommendations made by the Annan commission.

As well as urging a review of the citizenship law and greater freedom of movement, another key recommendation in the report called for increased economic development in Rakhine, one of the nation’s poorest areas, for the benefit of both its Buddhist and Muslim communities.

The report urges the government to bring the citizenship law into line with international standards and abolish “different distinctions between different types of citizens”. A review of the law was necessary “to ensure the equitable treatment of all citizens”, it said.

The commission acknowledged efforts by the government to improve freedom of movement in northern Rakhine but said more needed to be done.

“To have greater impact, freedom of movement should be delinked from the citizenship verification process, meaning that all individuals in Rakhine State should be able to move freely irrespective of whether they hold an NVC [National Verification Card], NRC [National Registration Card], or citizenship documentation, consistent with the basic right of all people to free movement,” it said.

The commission’s recommendations are aimed at creating an environment that enables the Buddhist and Muslim communities to co-exist peacefully and to develop.

For long-term success in Rakhine, the government should implement the recommendations of the Annan commission report that are beneficial to Myanmar. 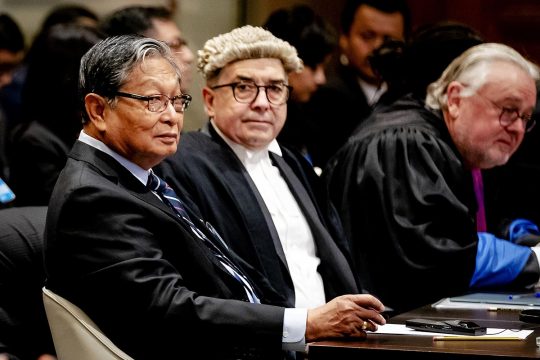