Women, even though they were main victims of Taiwan’s authoritarian regime, have been largely absent from the transitional justice mechanisms after Taiwan successfully transformed into a democracy. Following the discussion of women’s victimization in times of political oppression and the negative impacts of women’s absence in Taiwan’s current transitional justice process, this essay argues that the recent incorporation of the Convention on the Elimination of All Forms of Discrimination against Women provides a gender-sensitive legal framework for female victims to overcome the social and institutional obstacles that they have faced in transitional justice issues.

Women’s Victimization During the Authoritarian Regime

Taiwan was ruled by an authoritarian regime for almost four decades before it initiated a democratization process in the early 1990s. During this long authoritarian period, the Constitution of Republic of China (ROC Constitution) was suspended by the “Temporary Provisions Effective during the Period of National Mobilization for the Suppression of Communist Rebellion”. To consolidate its ruling legitimacy and power, the nationalist government (Kuomintang, KMT) soon imposed the Martial Law Decree over Taiwan. Consequently, the freedoms of speech, press and association and other civil and political rights guaranteed by the ROC Constitution were suspended and a great number of restrictive laws were enacted. In addition, the KMT regime established and strengthened a widespread and enhanced security system and used it as an instrument for suppressing dissent and anti-government activities. Hence, institutionalized human rights violations penetrated every sector of Taiwanese society for forty years. Among the most serious atrocities were the “February 28 Incident” in 1947, and the so-called “White Terror” that reached a peak in the 1950s and 1960s and continued to a lesser extent into the 1980s. It is believed that thousands of victims were tortured, enforcedly disappeared, or even killed in those human rights violations.

Women suffered various types of victimization in the context of institutionalized human rights violations. Some of them were intimidated, censored and prosecuted when they were suspected of anti-KMT regime activities by criticizing or thwarting its political agenda. Similar to male violations, these women were usually taken and interrogated and often beaten and seriously tortured by intelligence agents and military police without the guarantee of physical freedom and due process. In addition, political violence and its impacts severely destroyed women’s lives. For example, when many Taiwanese male elites, including doctors, lawyers, teachers, journalists, businessmen and political figures were arrested, imprisoned or executed without a fair trial by the authoritarian regime, most of their female family members became widows. These women usually faced financial difficulties and endured all forms of discrimination, poverty and marginalization after losing their primary male economic providers. These female victims remained silent about their suffering until Taiwan’s democratization in the early 1990s.

The authoritarian rule was gradually dismantled by several rounds of peaceful negotiations between the KMT regime and the opposition party after lifting the Martial Law Decree in 1987. Large-scale political and constitutional reforms were undertaken one after another when Taiwan transformed into as a constitutional democracy. Political democratization gave rise to a much more open society and many legal limits on civil and political rights were removed, which empowered civil society and facilitated the establishment of human rights and women groups. These burgeoning human rights and women groups made great progress in improving the conditions of women through legal and judicial means. For instance, they launched several strategic constitutional litigation before the Constitutional Court of Taiwan, resulting in successful changes to law and policy on various gender issues. In addition, gender mainstreaming reforms were undertaken and relevant gender laws were enacted to improve women’s economic and social status. The process of democratization also witnessed constitutional recognition of formal equality and quotas for women in electoral politics, which not only increased the number of female representatives in local and national legislatures, but also empowered some female victims of the former authoritarian regime to run for local or national elections. Through their political campaigns and activities, their past suffering drew public attention. Some of them even became famous and held important official positions.

Democratization also required the newly elected governments to deal with past human rights violations. Negotiation-oriented political transition led by male elites produced compensation-based transitional justice policies and mechanisms that mainly offered money to those who suffered past human rights violations in 1990s. Since women’s rights groups and activists prioritized gender equal payment and equal rights in the family over gender-based violence of transitional justice in their reform agenda, the progress of gender equality failed to be reflected in the design of transitional justice mechanisms. Without a gender perspective, the transitional justice mechanisms not only failed to capture the complex gendered experiences during the authoritarian period, but also did not take the specific victimization of women into account. The absence of women in the design of transitional justice mechanisms has had negative effects on accountability, truth finding and social reconciliation. For example, the compensation-oriented transitional justice policies mechanisms fail to address the responsibility of perpetrators of human rights violations. This inhibits female victims from launching lawsuits to redress their physical and mental suffering. Without any accountability mechanism, female victims have huge difficulties knowing who was responsible for their suffering. In addition, the current limited truth investigation lacks a gender perspective and therefore could not fully document the historical accounts of women’s victimization under the authoritarian regime. Furthermore, the rigid categories prescribed by compensation laws only partly satisfied the specific material and psychological needs of female victims. Those negative impacts inevitably produced social division and impeded political reconciliation for Taiwan.

“White Terror” was the dark period ruled by the Martial Law Decree after February 28 Incident. Ten thousands of people were tortured, disappeared and killed because of political repression of the KMT regime. After the lifting of Martial Law in 1987, the government of Taiwan launched the truth investigation and compensated to the victims of the February 28 Incident and White Terror.

Recent endeavors of civic groups pushed the Taiwanese government to incorporate international human rights laws in the domestic legal system. For example, the government ratified the Convention on the Elimination of All Forms of Discrimination against Women (CEDAW) in 2007. In 2009, the government also ratified the International Covenant on Civil and Political Rights and the International Covenant on Economic, Social and Cultural Rights. The Implementation Acts to those international human rights laws were enacted one after another to guarantee the rights in those laws directly applicable in the Taiwanese legal system. Among those treaties, the CEDAW provides some feasible guidelines to break the legal and social barriers that women have faced in the transitional justice process. For example, the CEDAW’s Committee has repeatedly emphasized gender equality and gender inclusion shall be recognized and realized by all government agencies of state parties. In terms of transitional justice, the Committee, in its General Recommendation No. 30, clearly indicated that women’s diverse experiences shall be integrated into all peacebuilding, peacemaking and reconstruction processes. When the CEDAW was incorporated in the Taiwanese legal system as part of domestic law through the 2012 Implementation Act, those gender principles in the CEDAW that guarantee women’s access to justice, truth and reparation can be used to reform the existing transitional justice mechanisms and advance the overlooked status of female victims.

In January 2016, the opposition party – the Democratic Progressive Party (DPP) - won the presidency and parliamentary majority seats. This new democratic context offered the second chance to reopen the debate on transitional justice. Indeed, numerous laws and policies were proposed to address unresolved issues of transitional justice, such as the acquisition of the illegal party assets of the KMT party, the establishment of a truth commission to investigate past human rights violations and the revision or enactment of relevant laws to open up national archives. To avoid the previous failure of transitional justice mechanisms to address women’s victimization, the principles of inclusivity and exposure to women’s experiences of discrimination should be integrated into the new transitional justice reforms. For example, the proposal for the establishment of a truth commission shall guarantee gender quotas for the appointment of commissioners, provide a platform for female victims to speak up their unacknowledged past sufferings and create a gender-sensitive guide to include women’s voices and experiences in truth recovery. The inclusion of a gender perspective into new transitional justice mechanisms not only helps in satisfying the needs of women victims in a holistic manner, but also contributes to tackling the root causes of past human rights violations. This also will enhance social reconciliation and democratic development for Taiwanese society.

Copy this HTML into your CMS
Press Ctrl-C to copy
Taiwan : Related articles 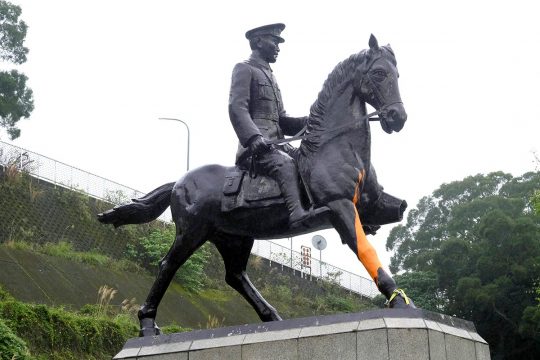 Kuomintang assets at heart of transitional battle in Taiwan
Most read