The crisis that has been taking place in Myanmar since August – an attack by Muslim rebels, bloody clampdown by the army and flight to Bangladesh of hundreds of thousands of Muslim Rohingya people – has provoked outrage across the world and denial from Nobel peace laureate Aung San Suu Syi, who is the country’s de facto leader. But Matthias Huber, a Swiss expert on Myanmar, says the world is being too hard on Suu Kyi.

The United Nations announced on Wednesday it was preparing a humanitarian aid plan in case all the Rohingyas of Myanmar (also known as Burma) flee to Bangladesh to escape the violence. Meanwhile Myanmar decided to allow humanitarian organizations into Rakhine state, the scene of violence since August that has caused nearly 500,000 Muslim Rohingyas to flee to neighbouring Bangladesh, submerging this poor south-east Asian country. The UN considers that the abuses of the Myanmar army and Buddhist militias amount to ethnic cleansing. Matthias Huber of the Olizane publishing house and the Switzerland-Burma Association gives us his personal point of view on the situation. 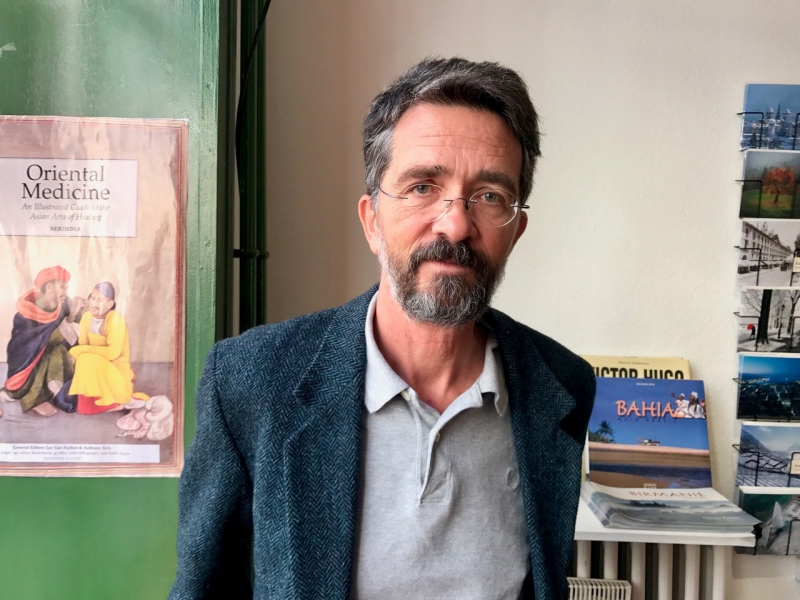 What is your criticism of reactions from the international community, NGOs and some media with regard to the tragedy facing the Rohingyas in Myanmar?

Matthias Huber: They often present this crisis in a very one-sided manner. The Rohingyas are portrayed as the only victims, and the military, like other Burmese, as the only aggressors. But the situation is much more complex than this black-and-white picture.

But army abuses against the Rohingyas are undeniable….

Of course. The army is using brutal tactics. Hundreds have been killed and any death is one too many. But it is not a genocide as French President Emmanuel Macron claimed. Words end up having no meaning.

We might have expected that Aung San Suu Kyi would vigorously condemn the army’s abuses.

But she is a political leader whose hands are tied. When she did not go to the UN General Assembly in New York last week, it was probably because she was afraid she would be ousted by the army in her absence.

How far back do clashes go between Rohingyas and Burmese?

Today’s problems have their root in the colonial period, when there were anti-Muslim pogroms. At that time, some Muslims were doing better economically than the Burmese, who are mainly farmers. The Muslims of Indian origin controlled a lot of trade, and so much of the economy. This fuelled tensions. As for the Rohingyas, they claim to be an ethnic group that was in Myanmar even before the Burmese arrived, but that is historically false. Most of this ethnic group was based in the region of Cox’s Bazar (a town in the extreme southeast of Bangladesh, near the Myanmar border) until 200 years ago. These people were brought by the British colonialists after the first Anglo-Burmese war in 1826. The Arakan (Rakhine) region that they had just annexed lacked manpower to cultivate the rice fields. That does not at all detract from the fact that the Rohingyas have a right to be recognized as full citizens of Myanmar. But the Rohingyas continue to claim they have always been there, and this antagonizes the Burmese who have not forgotten their secessionist tendencies during and after the Second World War.

Are the Rohingyas the only Muslim minority in Myanmar?

No. The Rohingyas came from neighbouring Bangladesh, whilst other Muslims in the country came from southern India, also brought by the British. There are also tensions between these Muslims who came from India and the Buddhists of central Burma, even if they are less acute than in Arakan. Many of these Muslims are concerned about the situation and are distancing themselves from the Rohingya movement. Indeed, the August attack by the Arakan Rohingya Salvation Army (ARSA, a recently formed armed group which claims it only wants to protect the Muslim Rohingyas) against several Burmese police posts (bringing a massive army crackdown and the flight of hundreds of thousands to Bangladesh or Burmese towns) leads us to fear a growing influence of Jihadist groups which could torpedo any peace-making efforts. On 23 August, former UN Secretary General Kofi Annan, chairman of the consultative Commission on Rakhine, presented his report to the authorities. The next day, Aung San Suu Kyi - de facto leader of the Burmese government – declared that she agreed with most of the report’s conclusions, including a revision of the 1982 nationality law which prevents the Rohingyas from obtaining Burmese nationality. And on August 25, the Islamists launched their attacks to short-circuit this plan, which would have helped appease the situation and weaken Rohingya support for ARSA. After the defeats of Daesh in Iraq, Syria and Libya, several thousand Jihadists from the region have withdrawn and are trying to establish rear-bases in southeast Asia, such as Marawi in the Philippines, in southern Thailand and now also in southern Bangladesh and Myanmar. (Last year, the International Crisis Group published a report on the Arakan Rohingya Salvation Army which evoked the risk of links with Jihadist groups. In a statement on September 14, ARSA denied any links with Al Qaeda or Islamic State).

But isn’t Aung San Suu Kyi showing a certain disdain towards the Rohingyas, who are looked down on by people in the élite to which she belongs?

That cannot be ruled out, even if what she says aims to be very inclusive. No doubt the Burmese have a superiority complex with regard to the ethnic minorities who make up a third of the country’s population. But Myanmar is in the midst of a democratic transition, a process which will take time. Today the army still controls the three key ministries, that is Defence, the Borders and the Interior. This means it can completely lock the country down. In other words, the army continues to control the country, including economically and through corruption. And its agenda is not the same as the democrats’.

So has the economic liberalization launched by the previous government widened the gap between the towns and the rural areas?

Absolutely. The previous government, which was still marked by the military, tried to calm the people in the street by opening things up for the budding middle class, importing lots of cars, scooters, mobile phones and so on. It flooded the country with consumer goods which benefitted a small urban elite and not at all the rural areas. In addition, economic liberalization has not brought more development, given the fact that there is no legal framework worthy of that name. The lack of a land register, a code of obligations and so on discourages Western investors.

Is Myanmar caught in an infernal circle?

That is a big risk, in any case. A lot of effort is needed from everyone to at least stabilize the situation. If the Annan commission recommendations are followed, a compromise could be found on the nationality issue. But with the Islamists on one side and the Buddhist nationalist fringe and the extreme Right on the other, it will be difficult. Having said that, we should remember that the government of Aung San Suu Kyi recently banned the most extremist Buddhist movements. These extremist movements support the army. But the 2015 elections showed that their influence is relatively weak.