On October 30 a Dutch court is due to open the war crimes trial of Eshetu Alemu, 63, ex-member of the regime of former Ethiopian dictator Mengistu Haile Mariam. He is accused of war crimes, torture and illegal detentions. The trial is expected to last two weeks.

The trial due to open before a court in The Hague on October 30 is taking place 40 years after the events in question. The man who will appear in the dock faces four charges of war crimes -- for illegal detentions and cruel treatment -- and of torture. His indictment cites by name 321 victims, and refers to two events in particular.  In August 1978, Eshetu Alemu, an official of the Communist regime in Godjam, a former province in northwest Ethiopia, is said to have ordered the execution of 75 young prisoners. They were killed in a church and their bodies thrown into a mass grave. He is also accused of having illegally detained during the same period 240 people in “tiny rooms where there was hardly any daylight,” according to the State Prosecutor. Others were allegedly tortured. A court statement says that according to witnesses – Ethiopians living abroad, some of whom are expected to come and testify in The Hague – victims were bound and suspended in the air, beaten with sticks on the face and on the soles of their naked feet.

So, apart from the potential impact for direct victims, what is the importance of such a trial taking place thousands of kilometres away from Ethiopia?

“It is important for past as well as current politicians, including the ones in Ethiopia, to understand that they cannot commit crimes and run away and hide in Europe and the United States to escape justice,” says Girmachew Alemu Aneme, an associate law professor at the University of Addis Ababa. “It shows for all engaged in political executions past and present and to the wider society that justice will be served even after long years.”

Hirut Abebe, a victim of torture during the “Red Terror”, is less optimistic. “It would be wonderful if the case had an impact, but I’m not optimistic,” she says. “People are now focused on the present. The Red Terror, from the perspective of a big portion of the population, seems to be ancient history, even though there’s a direct link to those events that happened less than forty years ago. Many of the period’s victims and survivors are still alive.”

This is not the first time that Eshetu Alemu has been tried. This former member of the Derg regime, the Communist government that seized power in 1974 after the overthrow of Emperor Haile Selassie, was sentenced to death in absentia by an Ethiopian court for assassinating opponents of the regime. This was subsequently commuted to life imprisonment. A year after the fall of Mengistu, the new Ethiopian government tried some 6,000 leaders of the former regime, including planners and people suspected of executing crimes. Mengistu (known as the “Red Negus” or red monarch), who fled after his regime’s fall to Robert Mugabe’s Zimbabwe, was sentenced to death for genocide. During the trials in Ethiopia from 1994 to 2008, the court identified more than 9,000 dead, 1,500 injured and 1,600 victims of torture, but the total number of victims of Mengistu’s “Red Terror” regime (1974-1980) is estimated at hundreds of thousands.

Hirut Abebe, now living in exile, remembers testifying against her torturer. “Yes, I am a survivor of the Red Terror era, and I testified against my torturer,” she says. “Justice has been done, and the SPO (Special Prosecutor’s Office) should be recognised for all the good work they did. However, I don't agree about how the whole thing was managed.”

“The SPO trials are a break from the past,” Girmachew Alemu Aneme told JusticeInfo. “When the Derg came to power in 1974, it summarily executed 60 top officials of the government of Emperor Haile Selassie. Among the 60 were persons like former Prime Minister Aklilu Habtewold, who served his country in many capacities for over three decades.  The present regime chose to establish the SPO and prosecute the Derg members. In this sense and in terms of the rule of law, the SPO and the trials are right. However, the impact of the SPO on how justice is served now is not very clear. Judicial institutions are still very weak and there are no guarantees of non-repetition.”

The northeast of Ethiopia has for the last few months been the scene of inter- ethnic violence which has left hundreds of people dead, according to the government in Addis Ababa which says it is conducting an investigation. Far from there, Eshetu Alemu will leave his prison cell in Rotterdam for a few hours on Monday morning to go to court. Alemu, who acquired Dutch nationality several years ago, has been in preventive detention for two years. 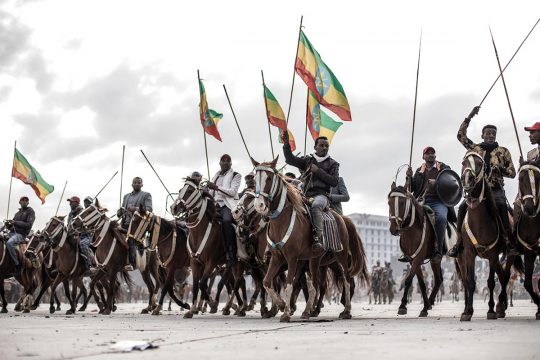 War in Ethiopia: What chance of justice for serious crimes?
Most read