In Guinea, investigations into the September 2009 massacre in Conakry have finally closed, seven years after the event. Announcing this on December 29, 2017, Guinean Justice Minister Cheik Sacko said the suspects have been referred for trial. On September 28, 2009 the military junta in power at the time brutally crushed a peaceful opposition protest, killing 156 people and raping more than 100 women, according to UN figures.

The end of the judicial investigation seems to pave the way for a trial. A steering committee has been set up to prepare the first stages of the trial, although no date has been set for its opening. “Such an important case of mass crimes has no deadline, it will take place in Guinea,” Cheik Sacko told a press conference in Conakry. “I don’t know when, but there will be a trial.” He also made an implicit call for donors to help fund it. “If we have no money, we will not be able to hold this trial, which will last at least 8 to 10 months,” said the minister, well aware that the international community puts importance on such a trial. The United States and European Union have previously promised to help the Guinean government which, according to Cheik Sacko, will establish a budget for its contribution in the course of this year. No figure has been mentioned so far.

As for the judiciary, “Guinean magistrates are ready to hold this trial”, according to the chief Prosecutor of the Conakry Appeals Court, Mondjour Chérif. It is expected to take place at the court in Dixinn, in the Guinean capital. But some observers already see warning signs. First of all, charges have been dropped against two high-ranking military officers who were members of the military junta in power at the time of the massacre. They are General Mathurin Bangoura, the current governor of Conakry, and head of the gendarmerie Bienvenu Lamah, who was in charge at the time of the militia stationed at Kaleah camp, some 100 kilometres from Conakry.

The investigating magistrates deemed that there was not enough evidence against them, but lawyers for the victims have appealed the decision. Another surprise is that General Sekouba Konate, former transitional president and Defence Minister at the time of the events, will not be called to testify, although he has several times expressed his willingness to do so.

So it seems only 13 accused will be put on trial. They include former junta leader Moussa Dadis Camara, who is still in exile in Burkina-Faso; Aboubacar Diakite alias Toumba (arrested in Dakar, extradited and detained in Conakry); and Colonel Moussa Tiegboro Camara. They face several charges including murder, rape and torture. The judicial battle is already joined, even before the trial has opened. Lawyers for Toumba Diakite have withdrawn from the case, saying the judicial authorities have violated their client’s rights and that he was victim of an attempt to poison him in prison. Meanwhile Asmaou Diallo, president of the association representing victims’ relatives and victims of the massacre, is threatening to take the case to an international court if the case does not open in 2018.

Thousands of people were protesting in Conakry stadium on September 28, 2009 against Dadis Camara running for president when soldiers burst in and opened fire with automatic weapons. According to the UN, at least 156 people were killed and 109 women were raped. Some of the rape victims were forcibly taken to military camps and held for days in sexual slavery. A December 2009 report by the UN commission of inquiry called this a crime against humanity.

Copy this HTML into your CMS
Press Ctrl-C to copy
Guinea : Related articles 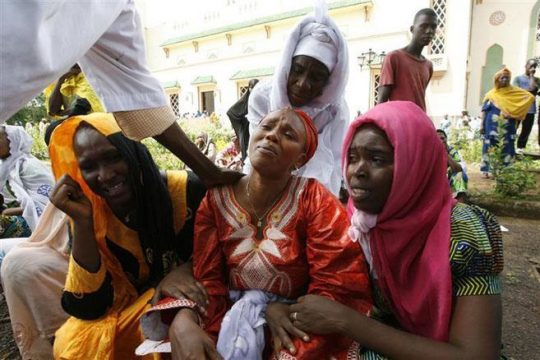