Journalists working for Agence France-Presse and Reuters were among three reporters being held by Sudanese authorities on Thursday a day after they were arrested covering demonstrations against rising food prices that were dispersed by police.

Abdelmoneim Abu Idris Ali, a 51-year-old who has worked for AFP in Khartoum for nearly a decade, was covering the protests on Wednesday in the Sudanese capital’s twin city of Omdurman, where riot police fired tear gas on some 200 protesters.

Idris Ali was unreachable after the protest and authorities informed AFP on Thursday that he had been arrested along with two other journalists, including one working for Reuters, and was being held at a detention centre run by Sudan’s National Intelligence and Security Service (NISS).

Authorities initially said Idris Ali would be released within hours but as of late Thursday, more than 24 hours after he was detained, he was still being held.

Authorities said the three journalists “are being investigated” but provided no further details.

Reuters did not name their detained reporter who they said was a stringer — a term used to describe people who work for media outlets part time or on short term assignments when news breaks.

The agency said they had last heard from their reporter just before they left to cover the protests.

“We do not know the circumstances of the detention and are actively seeking additional information about the situation,” a Reuters spokesperson said in their dispatch on the arrests.

Several protesters were also reported to have been detained at the demonstration.

Sporadic protests have erupted across Sudan after prices of food items, but mainly bread, surged following a jump in the cost of flour due to a shortage of wheat supplies.

Wednesday’s rally was called by the main opposition Umma Party, a day after a similar demonstration was held near the presidential palace in Khartoum following a call issued by the Communist Party. Tuesday’s protest was also broken up by police.

Similar protests were held in late 2016 after the government cut fuel subsidies.

The authorities cracked down on those protests to prevent a repeat of deadly unrest that followed an earlier round of subsidy cuts in 2013.

Critics have repeatedly accused President Omar al-Bashir’s regime of cracking down on the media in Sudan, with watchdog Reporters Without Borders ranking the country 174th out of 180 countries in its 2017 World Press Freedom Index. 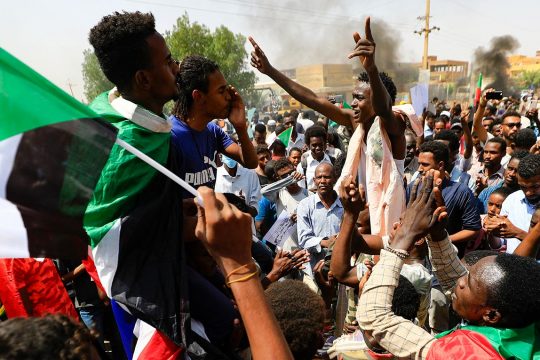 Why Handing Over ICC Suspects Could Help Sudan’s Transition

Who is Abd-al-Rahman?
Most read