Poland’s adoption of a controversial law on the history of the Holocaust marked the transitional justice week. Once again, a country is trying to impose its vision of history through law and close all debate on its past. The text provides for prison sentences of up to three years for anyone who talks of “Polish death camps” or “attributes responsibility or co-responsibility of the Polish State in Nazi crimes”.

Historically, the extermination camps in Poland during the Second World War were German and the work of the Nazis without collaboration of the Warsaw government, unlike other countries such as France which collaborated with the enemy. Holocaust museum Yad Vashem writes clearly that to speak of Polish death camps is a “distortion of history”.

But these facts should not prevent an examination of Poland’s history at that time, when there was also denunciation of Jews to the occupying authorities and pogroms even after the war ended. This is “a way of affirming a closed and narrow view of national identity,” writes JusticeInfo editorial advisor Pierre Hazan. “ Poland’s parliamentary majority is playing to nationalist sentiments.”

Writing for JusticeInfo.net, transitional justice expert Tomasz Lachowski warns of the dangers this new law poses to freedom of expression. He wonders about the definition of the “Polish nation” put forward in the law. “Fighting for historical truth with a penal code, instead of providing dialogue or education, is the matter of weak states,” he concludes, “and sadly, Poland has just joined such a club.”

The Central African Republic is another country that is looking at its past and trying to define a path to transitional justice. “We have a duty to bring justice,” says bishop of Bossangoa Monsignor François Xavier Yombadje, who chairs a working group set up by civil society to define a transitional justice model. “We cannot escape that, after the crisis we have been through. And justice cannot be done without reparations.” In this interview he also asks: “If we ever manage to emerge from this crisis, how are we going to fulfil our duty to remember? Are we going to erect  a monument, like the one to the Martyrs?”

Philippinnes. At the ICC, a preliminary examination does not mean a trial or even an investigation. But this is a “warning shot to incite the States to prosecute the perpetrators of the crimes in their own courts,” writes our correspondent in The Hague. It also shows the “almost universal reach of the ICC”, which is now conducting nine preliminary examinations including the

Philippines and VeneVenezuela, she writes. Philippine President Rodrigo Duterte responded angrily, claiming local laws do not specifically ban extrajudicial killings. “It is not defined anywhere so how can you now accuse me of a crime," said Duterte. Some 4,000 suspected drug traffickers and users have been killed by police since he was elected. The authorities are also investigating 2,000 other drug-related murders committed by unknown perpetrators. Venezuela, which is about to hold presidential elections, also slammed the ICC move, saying it is politically motivated. 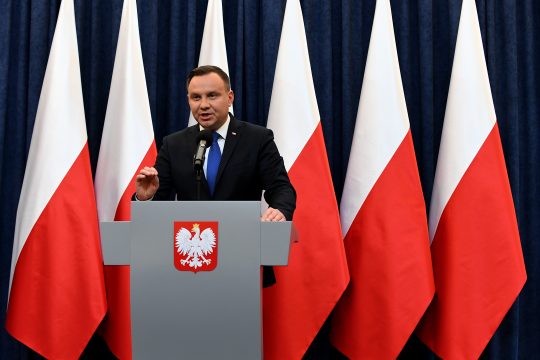 Poland : "Fighting for historical truth with a penal code is the matter of weak states"
Most read