In a packed room, supporters of Russia’s main opposition leader Alexei Navalny scribble notes as a lecturer gives tips on how to nab ballot-stuffers at Sunday’s polls.

“Just your presence at the polling station halves the risk of violations.”

Navalny, whose bid to stand for president was scuppered by a criminal conviction, has urged supporters to boycott the polls.

He dismisses even the nominally oppositional candidates as hand-picked by President Vladimir Putin.

But he nevertheless told supporters to chronicle violations as authorities are expected to go all-out to boost turnout after a lacklustre campaign.

“We are putting out a huge number of observers for the first time. It’s a very complex process. (The authorities) are really bashing us,” Navalny told Echo of Moscow popular radio station on Wednesday.

Across Russia, law enforcement has raided the offices of Navalny supporters and detained and jailed organisers.

Navalny has urged against street protests on polling day as a potential “gift to the Kremlin.”

On election day, “there probably could be some demonstrations because we see there are a lot of discontented people,” Yashin said.

“Probably some will want to voice protest against the procedure that’s being foisted on us under the guise of elections.”

The 60 or so would-be observers at Navalny’s campaign office in Moscow included students, a journalist at a Kremlin-loyal newswire and an actor with a number of film and television roles.

Most say they have never observed at elections before.

“The fact that Navalny isn’t a candidate is very sad of course, but it’s not a reason to throw in the towel,” said 19-year-old student Ivan Orlov.

“I realised I can’t sit idly by,” said Oleg Dulenin, a 44-year-old actor in a bright flower-print shirt.

“There’s no point voting now — for the authorities, you’re just like a little insect,” he added.

Navalny has said that he expects some 26,000 supporters to work as observers.

Nikolai Lyaskin, the head of the Moscow campaign office, bounded in and urged people to monitor the densely populated region around Moscow.

“It’s Dagestan in our backyard,” he said, referring to a North Caucasus region notorious for ballot-stuffing and unbelievably-high turnout figures.

“We will get absolutely loads of falsifications” in the suburbs, he says, while Moscow itself is likely to be under closer scrutiny and more law-abiding.

Lyaskin was hit over the head with an iron pipe in September and spent 15 days in cells this year for breaching rules on organising protests. He is still under a travel ban meaning he won’t be able to leave Moscow himself.

Amnesty International in a statement this week warned of a “fierce crackdown” on activists, with “prominent opposition voices arbitrarily detained and charged with politically motivated offences.”

A burly bodyguard stood by as opposition campaigner Yashin in Moscow this week presented a damning report on Putin’s rule.

The pamphlet detailing corruption and cronyism is dedicated to the memory of opposition campaigner Boris Nemtsov, who was gunned down close to the Kremlin three years ago.

Days before, police confiscated the main print-run of the report as it was being handed over in an underground car park.

“It reminded me of a spy movie,” said Yashin.

Such a reaction shows “how explosive it is for Putin’s political position to disseminate the truth,” he said.

Asked if now was the most dangerous time to be an opposition activist in Russia, he told AFP: “What do you think, after the death of Boris Nemtsov, is it dangerous or not? I think there are certain risks.”

In the northwestern city of Saint Petersburg, 11 people from Navalny’s campaign team have been arrested and six received sentences of up to 25 days.

“They are shutting down the most active people. It’s a preventative measure,” said Polina Kostyleva, a pro-Navalny activist.

“The main task of the authorities is to prevent anyone raining on their parade.”

Despite the risks, some activists have made their point with creative anti-Putin protests.

In Saint Petersburg, activists from “Vesna” or Spring protest movement paraded in prison uniforms with the number 2018.

In the same city, a street artist with the alias Misha Marker put up a billboard inspired by “Three Billboards” film with the slogan “There can’t be enough billboards for our questions.”

This month, an activist carrying a mock coffin marked “elections” was jailed for 20 days in the Volga city of Nizhny Novgorod.

Support Us
CONTRIBUTE TO INDEPENDENT INFORMATION ON INTERNATIONAL JUSTICE
Across the world, access to justice and information is vital for societies to rebuild after periods of serious violence. This is why we are dedicated to offering a free website adhering to strict journalistic methods which is accessible to everyone in the developed and developing world. Justice Info is funded by donations. Each donation helps our journalists bring you independent information. A regular donation is ideal. We are also grateful for one-off donations.
SUPPORT US
Russia : Related articles 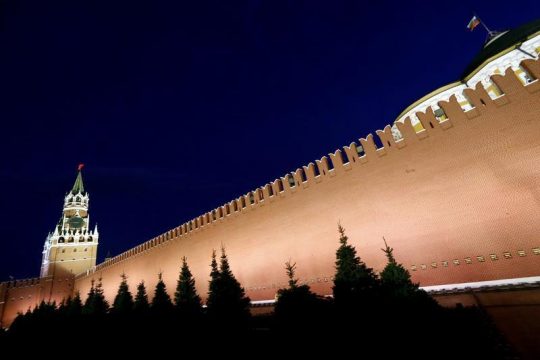