The future of the Malabo Protocol to create an African Court of Justice and Human Rights remains uncertain. Despite hopes that it could add a regional accountability layer and strengthen “African solutions for African problems”, it is also criticized for granting immunity to sitting Heads of States and Government.

The African Union (AU) foresees an alternative to the International Criminal Court (ICC) that consists of extending and strengthening the jurisdiction of the African Court on Human and Peoples’ Rights (ACHPR), to deal with international crimes committed in Africa. In 2014, the AU and its of Heads of State and Government meeting in Malabo, Equatorial Guinea, adopted the Protocol on Amendments to the Protocol of the ACHPR Statute, otherwise known as the Malabo Protocol. Even if the idea of an African court is frequently associated with the AU’s dispute with the ICC, discussions on a regional court with criminal jurisdiction go back to the drafting of the African Charter on Human and Peoples’ Rights in the 1970s.

The Malabo Protocol, when ratified by 15 member states, would grant criminal jurisdiction to the existing ACHPR, which is proposed to be merged with the African Court of Justice (ACJ) to create an African Court of Justice and Human Rights (ACJHR). As of May 2018, the Protocol has only been signed by 11 AU member states, namely Benin, Chad, Comoros, Congo, Ghana, Guinea-Bissau, Kenya, Mauritania, Sierra Leone, Sao Tome and Principe and Uganda. The proposed African court would have jurisdiction to prosecute international crimes such as genocide, crimes against humanity and war crimes, plus 14 additional crimes with distinct relevance to the African context, including piracy, unconstitutional change of government and terrorism.

Scholars have argued that the establishment of an African court would not be to override the jurisdiction of the ICC or undermine its importance but to provide “African solutions to African problems”. They also argue that if the Protocol is signed and ratified by member states, then it would fill the vacuum created by not having recourse to a regional legal mechanism before resorting to an international one. Assistant law professor at the University of Pittsburgh Matiangai Sirleaf argues that there are numerous ways the African Court could fill justice gaps. “Due to the existence of geographic, historical and cultural bonds among States, decisions of regional bodies may meet with less resistance than global bodies,” she argues. “Because the court is linked to the regional political bodies of the AU, this may facilitate stricter oversight.” Therefore, it would not be a court to replace the ICC but rather a court of next resort if national courts fail for one reason or another to prosecute persons responsible for human rights violations. Thus, the ICC would still have jurisdiction to try cases if victims believe that the ACJHR did not give them justice or prosecute their cases properly.

One of the advantages could be allowing trials to be carried out where possible in or closer to the places where atrocities were committed. This proximity has clear added advantages for investigations by the prosecution, which should have easier access to evidence and witnesses. More significantly, however, it offers victims and citizens a greater sense of “ownership” of the trial and would probably facilitate greater interest, participation, and reconciliation.

The Protocol also establishes an independent office of a public defender. This provision is not found in any other treaty establishing an international criminal court, with the exception of the Special Tribunal for Lebanon, which has a Defence Office as an independent organ of the court. The organization Kenyans for Peace with Truth and Justice has rightly observed that the creation of a Defence Office as a separate and independent organ of the court would place the Principal Defender on an equal basis with the Prosecutor. This is a significant innovation of the Protocol which would help safeguard “equality of arms” and offer a more effective channel through which concerns about defense could be raised and addressed.

Lastly, the Malabo Protocol creates a trust fund for legal aid and assistance to victims of crimes and their families. Whereas the ICC has similar provisions, the African court might be better placed to introduce remedies tailored to victim priorities and needs.  “The Court might even require a convicted defendant to participate in local reconciliatory procedures akin to Gacaca as a means of securing reparations to victims,” says Sirleaf.

Immunity for Heads of State

One of the Malabo Protocol’s most controversial aspects is that it grants immunity from Court investigation and prosecution to serving Heads of State and Government and other senior state officials. Article 46A bis of the Protocol on the Statute of the African Court of Justice and Human Rights reads: “No charges shall be commenced or continued before the court against any serving AU Head of state or Government, or anybody acting or entitled to act in such a capacity, or other senior state officials based on their functions, during their tenure in office.” This is despite the fact that although under customary international law sitting heads of state and senior state officials enjoy immunity from criminal jurisdiction of a third state, they do not enjoy such immunity before international criminal courts. According to Amnesty International, the immunity clause will undermine the legitimacy of the court and the fight against impunity on the continent, and is at odds with the founding and organizational principles of the AU.

There are also doubts about the AU’s financial capacity to effectively and efficiently deliver on its mandate, given the potential new crimes to be added within the court’s jurisdiction. According to academician Stuart Ford, the AU often appears to lack the political will and ability to implement its vision for the organization. This can be seen in the AU’s financial institutions. In spite of being identified in the Constitutive Act as crucial to the organization, fifteen years later they still do not exist. He further goes on to state that “something similar may happen to the Malabo Protocol. Even if the Malabo Protocol does come into force, will the AU have the political will and resources to adequately fund the expanded ACJHR?”

Lastly, the Malabo Protocol is criticized for provisions that undermine the very principles on which the ICC was established. For example, individuals and NGOs are excluded from having access and being heard by the court if the State against which a case is brought does not want to make a “declaration of acceptance”. Only AU organs and institutions will be allowed to submit advisory opinions under the Malabo Protocol. NGOs will lose the access they enjoy before the existing African Human Rights Court. 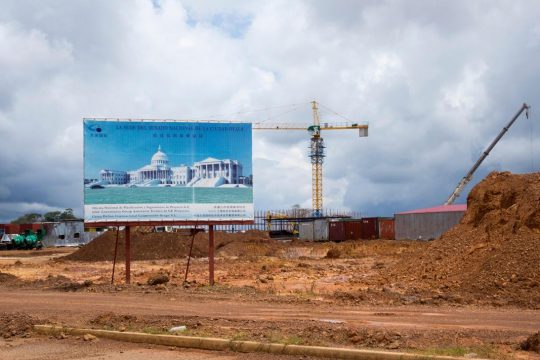 How Equatorial Guinea Turned Corruption into an Art Form
Most read