More than a century after massacres of indigenous people in former German South West Africa, now Namibia, their descendants and members of German civil society are pressing Berlin for an official apology. The recent returning of remains is not enough, they say.

The massacres of Herero and Nama people by the German army in the former colony are considered by many historians to have been the first genocide of the 20th century. Chased from their land, the Hereros rose up in 1904, killing around 100 German civilians. The following year a smaller ethnic group, the Nama, joined their uprising. The German response was disproportionately brutal. Some 60,000 Hereros and 10,000 Namas were massacred between 1904 and 1908, according to historians. The Germans set up concentration camps and conducted scientific experiments on "specimens" of what they saw as an inferior race. Nearly 300 skulls were sent back to Germany, the aim being to prove the racist theory of white supremacy over black people.

More than a century later, on August 29, 2018, Germany handed back to Namibia the remains of Hereros and Namas exterminated at the time. The ceremony took place in a protestant church in Berlin. “We Germans do acknowledge our historical-political and moral responsibility and the historical guilt borne by the Germans of the time,” declared Michelle Müntefering, Minister of State for International Cultural Policy at the German foreign ministry. “The atrocities committed at the time in Germany’s name constituted what would now be called genocide, even though it was not until later that this term was legally defined”.

Jefta Nguherimo, a founder member of  The OvaHerero/Mbanderu and Nama Genocides Institute, also criticizes the role of the protestant church. “The Church was accomplice and remains silent, issuing only vague statements,” he told JusticeInfo.  “The venue and the players during the ceremony have not atoned for their sins.  Post-colonial justice will only come when the Western countries including Germany acknowledge, apologize and correct their wrongs during the colonial period.” What is needed, he says, is “a formal apology by the Chancellor and endorsed by the Bundestag [German federal parliament]”.

German civil society and academia have also reacted. Historian Christian Kopp of the NGO alliance "No Amnesty on Genocide", thinks Hereros and Namas have a right to ask “why chancellor Angela Merkel some days ago laid flowers for the victims of the genocide against the Armenians in 1915 but abstained from the ceremony for the African victims of Germany's first genocide”. He says what is needed now is “a German president or chancellor kneeling down in the Omaheke desert in commemoration of the 100,000 Ovaherero and Nama children, women and men killed between 1904 and 1908”. Christian Kopp deplores what he calls Germany’s “high-handed approach, colonial style, a mixture of ignorance about the descendants and their lives on the one hand, and of deep-rooted colonial arrogance against African and black people on the other”. He is also calling for direct participation of Hereros and Namas in the talks that are under way. “There will be no peace and reconciliation as long as the victim groups are excluded by both governments and as long as they are not allowed to speak for themselves as is guaranteed to them in the UN Declaration on the Rights of Indigenous Peoples,” he says.

Finally, Kopp is urging all the former colonial powers to return human remains from their former colonies and dare to open a debate on the dark periods of human history. According to him, Berlin alone still has human remains from Rwanda, Burundi and Tanzania, which were all part of former German East Africa. “All these skulls, skeletons, single bones, body parts must immediately be offered for restitution, and we have to talk about the circumstances of their coming here in the first place,” he says. “We have a right to know as well as a duty to tell what's in our basements. We have to gaze into this abyss”.

However, German foreign affairs ministry spokesman Felix Lung implies that it is not yet the time for official apologies. “Since December 2015, special envoys appointed by the German and Namibian governments have been conducting negotiations aimed at healing the wounds of the past,” he says. “The German government aims to ask for forgiveness on the basis of an agreed text” between the two sides.

Asked about the demand of Herero and Nama communities to be recognized as full parties to the dialogue under way, he reiterates that “the negotiations are conducted between the German government and the Namibian government”. “The Namibian Government has set up advisory committees in order to include the Herero and Nama ethnic groups, which are particularly affected by the past, in the talks,” he continues. “The Namibian government has repeatedly underlined that everyone is welcome to take part. Some ethnic groups are taking part in the talks, but others refuse to join in.”

As for returning remains from former East African colonies, he says that “currently, no requests to this effect have been presented to the government of Germany by the governments of Burundi, Rwanda or Tanzania”. In other words, if nobody asks, Germany will be content with the status quo. A century on, the wounds of the past are not yet about to be healed. 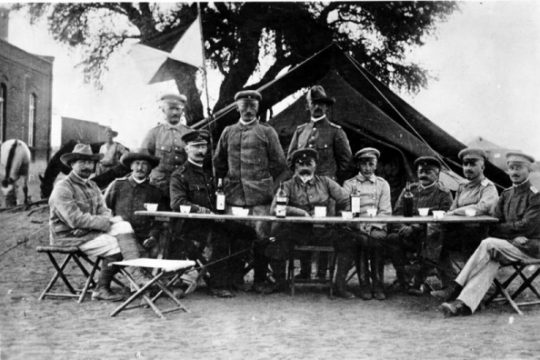 Week in Review: Steps towards justice for a forgotten genocide
Most read