The world is an increasingly digital place and cell phones with their cameras and recording devices are widespread in conflict zones. How does the new breed of specialised war crimes apps fit into the digital revolution and what do they add for courts and users beyond the normal documenting tools?

There are over 4 million videos of the conflict in Syria on YouTube alone. One Google executive told journalist Armin Rosen that there are “more hours of footage of the Syrian civil war on YouTube than there actually are hours of the war in real life.” Can any specialised app compete with that?

The answer is no, because of YouTube’s accessibility, popularity and scale. But specialised apps can increase the effect of the photo and video material that is already being collected. With that in mind the London-based International Bar Association launched its eyeWitness to Atrocity app in 2015. Last September it had a major success when two militia commanders in the Democratic Republic of Congo (DRC) were convicted of crimes against humanity after a court for the first time admitted photo and video evidence recorded with the eyeWitness app as evidence in the trial. The footage detailed a lawyers’ visit to a mass grave site. As the full written judgement is still not available it is not possible to say in what way the footage contributed to the conviction but it is nonetheless a milestone that a court accepted evidence recorded with the app. 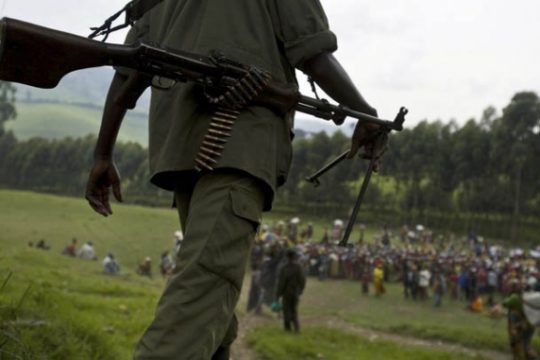 Wendy Betts, the director of the EyeWitness project explains that the app does three important things: it collects information about when and where footage was taken in a way that cannot be manipulated by users; it ensures that images cannot be edited; and lastly it creates a secure environment as information is encrypted and stored both on the app and on a special server.

It is an easy way to ensure judges know where and when footage was taken and it can persuade a court the images weren’t tampered with. With images taken directly off social media that is a lot harder.

This all helps create a so-called chain of custody for the footage which is very important if the images are used as evidence in court cases. It is an easy way to ensure judges know where and when footage was taken and it can persuade a court the images weren’t tampered with. With images taken directly off social media that is a lot harder.

While the app is available for download freely, Betts says they prefer to partner up with local organisations already documenting crimes where users are also taught on how to make the best use of the digital tool. “We are trying to bridge the gap between the people on the ground who collected it and the investigative bodies that can act on it,” she explains.

Any footage taken with the app, will be uploaded to the EyeWitness server first before it can be shared by users. This creates a master copy so any alterations afterwards can be tracked. Any photo or video filmed through the app is not immediately visible on the phone of the person that shot it, not in any gallery or visible file, to protect people on the ground collecting evidence when their devices are searched.

Betts stresses that the people who take the footage are the ones who control if and how it can be shared but the organisation has pro bono lawyers who look at all the uploaded footage to catalogue and curate the information for possible future use by courts or other investigative bodies.

Betts says eyeWitness to Atrocity has some 25 partner organisations across the world but won’t be more specific about which countries they are active in. Two NGOs have publically said they are using the app in the Democratic Republic of Congo and Ukraine.

A main challenge is that legal systems have not yet caught up with the way technology is moving.

Betts says a main challenge she and other app owners face is that legal systems have not yet caught up with the way technology is moving. “Technology is cutting-edge and moves very quickly while law is very methodical and moves a bit slower,” she says. “Courts are old-fashioned and judges like to see what they have seen in the past,” agrees Wayne Jordash, a leading international criminal lawyer. He does not see international judges and prosecutors championing innovative approaches to the kind of evidence technological innovations can yield.

The International Criminal Court (ICC), however, took a first step in 2017 in issuing an arrest warrant against Libyan commander Mahmoud al-Werfalli for war crimes primarily based on video footage posted to social media showing the alleged crimes. It is the first time the ICC has taken on a case based on 21st century technology, but much will depend on how the judges deal with this evidence if the suspect is ever arrested and the case comes to court.

Last year while visiting Cox’s Bazaar, Bangladesh, where nearly 700,000 Rohingya took refuge after fleeing Myanmar, Jordash ran into a man who had started to videotape victims of sexual violence without any measures to protect their identity or concern for possible re-traumatisation.

He says he understands the need of local NGOs to document and try and get attention and access to justice. Rather than insisting they shouldn’t do it, as some international prosecutors do, Jordash believes they should be helped to do it in a way that the evidence they gather can be used in future cases. He is trying to provide them with ways to do that by developing an app for his

The standards are meant to help civil society organizations on how to collect, preserve and handle evidence. The document is done on paper but how useful is dragging around a 200-page binder or scrolling through a PDF on a mobile phone? Jordash believes an app will get this information to civil society groups who need to work discreetly, quickly and cheaply. After seeing a successful app which explained the new penal code in the Maldives to prosecutors, police and civil society groups, he wants to make something similar for the Basic Investigative Standards, including a function where users can ask questions if they encounter dilemmas and get quick answers from professionals. “The biggest challenge for the app will be to persuade people to use it. The temptation for many civil society groups is just to get on with it, and collect as much evidence as they can,” Jordash said.

Providing security to victims and witnesses

While EyeWitness and the Basic Investigative Standards project focus on using new technology for gathering evidence in future cases, Celine Bardet of We are not Weapons Of War (WWoW) is developing her own app called BackUp, meant to help victims of wartime sexual violence. Initially developed as a way to identify where victims are and to give them access to a network of professionals that can provide specific help, users told Bardet the app actually removed some psychological barriers to reporting abuse. “What I was not expecting and what survivors told me is that it is easier for them to report things through the electronic platform and not to have to tell it to another person,” she said.

BackUp allows people to report incidents of wartime sexual violence and brings them in contact with a network of professionals who can help, from doctors and physiologists to lawyers. It is also meant to coordinate efforts among different care givers who might not have much overlap, for instance doctors treating rape victims and human rights lawyers.

The key to the project, according to Bardet, is not only the app but the back office that comes with it that secures and analyses the data coming in from Back Up. She is already using that structure in Libya and data gathered by WWOW is being used in a current investigation of the French war crimes unit.

Bardet had been thinking of such an application for years since she noticed the distance between victims and services for these victims. Sometimes NGOs set up to help rape victims would literally just drive around looking for people to help. Medical NGOs in Libya would tell Bardet that the torture victims they were set up to treat never came to the clinics, while human rights lawyers would not know where to send clients who needed medical help.

“The idea for BackUp is to develop a secure and simple system where you can bring together victims who don’t know about the services and cannot get to them, with service providers who cannot find victims to treat,” she says.

BackUp is not really an app but a web-based programme which leaves no traces on a user’s device that can show it is being used. It is still in the testing phase with Bardet raising money to do a two-year pilot study in five to seven countries such as Central African Republic, Libya, Syria, Iraq and Myanmar. WWoW is already working in some of those locations and hopes to extend partnerships with local legal and health care professionals and NGOs to set up a true support network for victims. Because the app itself will not really make the change, it must also come from the network established on the ground, Bardet believes.

Betts and Jordash all echo this: new technology brings new opportunities, but in practice the networks you create on the ground to use the technology are what will make the difference. The field is also getting competitive: donors like words such as big data and the idea that an app can empower victims to get justice. But will they also be up for funding the networks of local and international organisations needed to sustain the apps?

New technology brings new opportunities, but in practice the networks you create on the ground to use the technology are what will make the difference.

International courts remain very conservative when it comes to technological innovations. They also have other urgent problems to tackle first. “Right now the focus is just to get a case started and done within a reasonable amount of time,” says Jordash. Once international courts have mastered that, they may start to look at incorporating new technology into their cases.

The ICC at 20: elusive success, double standards and the “Ukraine moment”
Most read