The Special Tribunal for Lebanon (STL) announced on September 16 that it has indicted Salim Ayyash for attacks on Lebanese politicians George Hawi, Marwan Hamadeh, and Elias El-Murr — three assassination attempts that it says are connected to the February 2005 Beirut bombing which killed former Lebanese Prime Minister Rafik Hariri and 21 others.

While former cabinet members Hamadeh and El-Murr survived separate bombings in October 2004 and July 2005 respectively, Hawi, former leader of the Lebanese Communist Party, died immediately after a bomb detonated in his car in June, 2005.

The new indictment, which has been under seal since last May, marked the opening of the STL’s so-called “connected cases”, i.e. a number of violent political attacks that took place between October 2004 and December 2005 and that may be connected to the attack that killed Hariri. The new indictment comes nearly 15 years after the facts and almost as many years of international investigations.

Despite multiple attempts, El-Murr could not be reached for comment. Hamadeh, a current member of parliament, informed Justice Info that he would not be speaking further with media in light of recent threats.

The accused, Salim Jamil Ayyash, a known Hezbollah member, first came under international limelight in 2001 when indicted by The Hague-based STL for alleged involvement in the Hariri assassination. Ayyash along with the four other Hezbollah members accused of orchestrating the bombing were never found by Lebanese authorities. A fugitive of the STL, he has undergone a trial in absentia for almost five years in the main Hariri case. A verdict has been pending for nearly a year and is expected to be announced before 2020.

Ayyash’s alleged participation in the connected bombings has now implicated Hezbollah for generating political instability and violence in Lebanon over a two year period. At the time, the Syrian occupation of Lebanon was hotly contested between two political spheres. In his campaign for Prime Minister in 2005, Hariri made clear his intentions to oppose pro-Syrian parties in Lebanon, among which Hezbollah is prominent. Following the former Prime Minister’s assassination, the opposing camps would be officialized as the March 8 (pro-Syrian) alliance, and the March 14 (anti-Syrian) alliance.

Given Ayyash’s status in the Hariri case, it is unlikely that he will appear before the trial chamber to address the new charges. Three days following the initial indictments in 2011, Hezbollah’s secretary-general Hassan Nasrallah famously vowed that the “honorable brothers” – Ayyash and the four other accused before the STL – would never be apprehended by Lebanese or international authorities “even in 300 years.” Nasrallah and members of Hezbollah have long rejected the tribunal, accusing it of being a biased Israeli conspiracy.

According to a statement released by STL President Judge Ivana Hrdličková on September 17, Lebanese authorities have already informed the Tribunal that Ayyash could not be located and notified of the recent indictment. Nonetheless, an additional 30-day period will be dedicated to locating the suspect before a decision is made to start a trial in absentia.

“This is a different case, and even if connected to the 14 February 2005 attack, it includes new counts, different crimes, and different evidence,” STL spokesperson Wajed Ramadan told Justice Info. “The accused also needs to be notified of the new charges and new counts, despite the fact that he is also accused in relation to another set of facts in the [Hariri] case. He should benefit from the same rights, including the right to a fair trial.”

While Ayyash has long absconded, the insinuation that Hezbollah was involved in organizing a series of terrorist attacks in Lebanon will bear political consequences given the key political party’s representation in Parliament and Cabinet.

“The recent indictment of Ayyash is quite shocking for many,” Imad Salamey, policy advisor and professor of Middle East Political Affairs at the Lebanese American University told Justice Info. “It connects several plots together under one operation all linked to Hezbollah. Now that Ayyash is tied to multiple assassinations, it implies that he could not have done this single-handedly nor with a small group. These attacks must have been well thought out operations leading to Hezbollah and therefore the Iranian intelligence. These cases are no longer about the individuals anymore.”

The immediate effect, Salamey continued, will likely be seen on a political level as Hezbollah’s allies in the Lebanese government are now forced to tread lightly. Decision-making powers over national issues may see a temporary shift in favor of the March 14 alliance, led by Prime Minister Saad Hariri, son of Rafik Hariri.

“Hezbollah is already designated as a terrorist group by the United States, but this indictment may put further pressure on the European Union and other groups to reassess their relationship with them,” Salamey added. As the Lebanese economy struggles to stay afloat, alienation from key foreign countries and institutional donors would be a major risk to the country’s stability.

Although consequences may be felt on a political level, few believe that justice will be achieved. The timeline in which the STL handed the indictment is likely to be too little too late as both Lebanon’s national and geopolitical situations have considerably evolved since the mid-2000’s. No matter the ruling, the aftermath of a decision will bear very different consequences in today’s context.

After almost fifteen years of investigations, including four years of a well-funded U.N. commission of inquiry, the STL has only indicted five individuals — none of whom have been brought to court. Such record is unprecedented at the international level.

STL spokesperson Wajed Ramadan noted that such a tribunal cannot be compared to the pace of national trials. “The STL is the first tribunal of international character to prosecute terrorist crimes and to deal with highly complex and technical evidence,” she said. “This kind of crime is by definition difficult to investigate.” While acknowledging the frustration of such a delayed timeline, Chatham House fellow Nadim Shehadi claimed that such was inevitable for the tribunal. “We can speculate for days on why it has taken this long, but this should be expected. The ICTY similarly took well over two decades before it concluded.”

Nonetheless, in its twenty-five years, the International Criminal Tribunal for the former Yugoslavia (ICTY) has tried 111 suspects for genocide, crimes against humanity and war crimes.

When the STL was officially opened in 2009, it was hailed to mark a new era in Lebanese politics — one where political assassinations would not continue with impunity. The watershed moment gave hope to a country crippled by decades of political violence. Investigations led by the Lebanese authorities, the U.N. International Independent Investigation Commission and later by the STL were closely followed by the media. When the first trial in absentia finally began in 2014, it was broadcast across all major Lebanese media networks.

However, attention quickly waned as the hearings grew increasingly technical. Without the defendants, the prosecution and defense relied on circumstantial cellular evidence to develop stories for spectral figures. A small minority of Lebanese media continued to report on the Hariri trial in the ensuing years. The hearings have long since been cut from television. 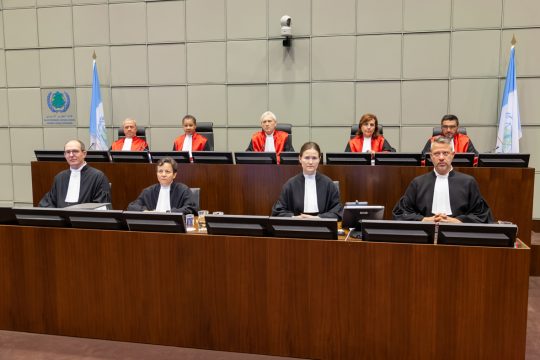 Lebanon Tribunal: What is a trial without suspects for?

“The STL was certainly exciting at first, but it’s true that very few follow the trial now,” Nadim Shehadi said. “The defendants have long absconded. It’s unlikely we will see Ayyash in court for the [connected] case and a trial in absentia does not offer the same hope for justice.”

Salamey agreed, adding that the inability to arraign the accused has nullified confidence in proper avenues of criminal justice. “Simply stated, many feel that it is worthless,” he said. “Most Lebanese have grown apathetic towards the court knowing it has no power to execute any of its rulings.”

In Lebanon, the Lokman Slim Foundation will keep the memory of political assassinations
Most read