On Wednesday September 18, the Congolese army announced that it had killed Sylvestre Mudacumura, leader of the Democratic Forces for the Liberation of Rwanda (FDLR), an armed group known for its massive abuses in the North and South Kivus in eastern Democratic Republic of Congo (DRC). Mudacumura [read our box below] was an authority and respected figure within the FDLR movement, of which he has been one of the pillars since its inception following the 1994 Rwandan genocide. He was shot and killed at the age of 65.

A "special Congolese army unit located and permanently neutralized" the FDLR military leader during an operation at night in the Bwito area of Rutshuru territory, in North Kivu province, the army's spokesman, General Léon Richard Kasongo, told RFI. However, the Congolese army did not carry out this operation alone, according to information gathered by Kivu Security Tracker (KST), a joint project of the Congo Research Group, based at the Center for International Cooperation of New York University, and Human Rights Watch. In particular, forces of the Renovated Nduma Defence of Congo (NDC-R) of Guidon Shimiray -- which is the subject of a mandate from the International Criminal Court (ICC) and with whom the army collaborates in the framework of the so-called "Sokola II" operations to track FDLR combatants -- were located in the area. And, according to KST, which mentions two Congolese military sources and two civil society sources, Rwandan special force elements were present alongside the Congolese military during the operation. This would be part of a policy of rapprochement with Kigali, which still wants FDLR leaders dead to avert a possible threat to its security. When questioned by JusticeInfo, NDC-R refused to comment on this information. In an interview with Le Monde newspaper, the Congolese president denied Rwanda's participation in the operation, but acknowledged that there was "intelligence sharing" with Kigali.

A hit that sacrifices justice

For Faustin Kambale, a researcher at the Centre for Research on the Environment and Human Rights (Credho) in Rutshuru where the FDLR are active, "it is good to neutralize Mudacumura, but it would have been more beneficial to arrest him and bring him to justice to help the victims know the truth about crimes committed by the FDLR. That would also have helped the security services to dismantle the collaborators of these rebels, who still remain capable of sowing death in the Kivus." The FDLR case is complex, adds Jackson Bwahasa, a conflict dynamics researcher at the Centre for Applied Legal Studies at the Graben Catholic University in Butembo. “Killing Mudacumura is a solution that suits those who cooperated with him and who do not want to risk possible disclosures during a trial," he continues.

Lawyer Gilbert Kyatsinge, ex-legal adviser to former warlord Antipas Mbusa Nyamwisi, testifies to the difficulties encountered by the latter when he was Minister of Foreign Affairs. "When Nyamwisi tried to resolve the FDLR problem through diplomatic channels, he came up against a lack of political will on the part of the leaders of the time [in 2008, under the presidency of Joseph Kabila]. We had carried out missions in the south of Lubero to try to obtain the surrender of senior FDLR officials, including Mudacumura, but unfortunately there were serious obstacles. It may be this lack of political will that blocked Mudacumura's arrest."

He had been wanted by the ICC since July 2012 for war crimes committed between 2009 and 2010 in North Kivu. Human Rights Watch says it documented the killings of more than 700 civilians by FDLR fighters between 2009 and 2010.  "Most victims were women, children, and the elderly, whom the rebels hacked to death with machetes or hoes or burned to death in their homes. These attacks were accompanied by widespread rape and other sexual violence,” says the American NGO Human Rights Watch in a report.

But in the DRC, no legal action has yet been taken against the FDLR. In a statement issued the day after Mudacumura's death, Lewis Mudge, Central Africa director at Human Rights Watch, pleads for action by the judicial authorities: “Mudacumura’s death should not mean that victims and their families are denied justice. Remaining FDLR leaders should still be prosecuted and the victims provided redress.” This is also the wish of Nacharlom Kasyano, a member of the Rutshuru Peace Group. "Judicial authorities should not be satisfied with the neutralization of Mudacumura. We must stop presenting this rebel group as weakened. Even without Mudacumura, the FDLR continues to commit crimes. This continues in Kaseguru, Busanza, Binza, where these rebels reign," he says.

Regional MP Prince Kihangi, chairman of the Political, Security, Administrative and Legal Commission of the North Kivu Provincial Assembly [the regional parliament] also calls for action to restore the rights of victims. "There are orphans, widows who are still suffering. Just because Mudacumura is 'neutralised' does not mean that the FDLR group has ceased to exist. No. The group exists, and remains accountable and responsible for its crimes. National and international justice must act to ensure that the new leaders of the group come to answer for their crimes in Kivu. It is not only citizens who must bring cases before the courts. The DRC has the right to bring an action before international courts to obtain justice and reparation for its citizens," pleads the parliamentarian, who is also a lawyer at the Goma bar.

To contain FDLR crimes in a sustainable way, his lawyer colleague Kyatsinge believes that it is necessary to give priority over military and judicial aspects to political and diplomatic efforts to obtain the surrender and disarmament of Rwandan Hutu fighters. "As long as military and judicial actions are favoured, these rebels will still terrorize the population and crimes will continue to be committed,” he says. “Efforts to secure the surrender and disarmament of the FDLR should be given a chance." 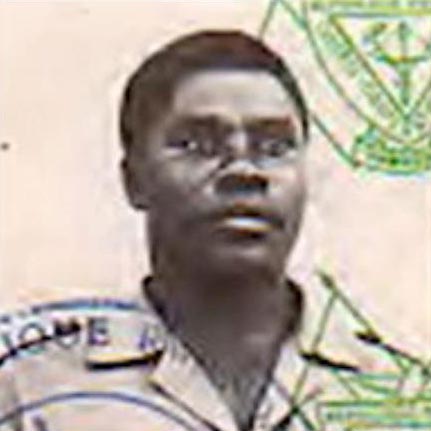 WHO WAS SYLVESTRE MUDACUMURA ?

A former minor seminarian, Sylvestre Mudacumura is, like the vast majority of Rwandan officers of the time, a graduate of the Kigali Military College. This son of the north served in various units of the Rwandan Armed Forces (FAR), including the Presidential Guard battalion, of which he was once head of operations. Sent to the front against the rebels of the Rwandan Patriotic Front (RPF), Mudacumura was given command of a battalion in eastern Rwanda. After the genocide in July 1994, he fled to former Zaire with other members of the FAR, fleeing the advance of the RPF. In the Congolese forests they created the Rwandan Liberation Army, which later became the Abacunguzi Fighting Forces (FOCA), the armed wing of the FDLR. In 2003, he was appointed head of the FOCA high command after the defection of General Paul Rwarakabije, who is now retired in Rwanda.

The death of the FOCA Commander-in-Chief follows that of the FDLR political leader, Ignace Murwanashyaka, who died in Germany in April 2019 of natural causes. Murwanashyaka, from southern Rwanda, was prosecuted in German courts in connection with his responsibilities in the FDLR. Two other former senior FDLR officials, including the movement's spokesman La Forge Fils Bazeye whose real name is Ignace Nkaka, are currently on trial in Rwanda after their extradition from Kinshasa last December. Only one FDLR leader was arrested by the International Criminal Court, the group’s former executive secretary Callixte Mbarushimana, who was released in December 2011 after the Court dismissed the case for lack of evidence.