After more than a month of mobile court hearings and a session before the military tribunal in Bukavu, South Kivu province, Alimasi’s trial ended on 1 November with the closing arguments. The militia leader is being prosecuted along with four other individuals for rape, murder, torture, sexual slavery, deprivation of liberty, looting and destruction of property, acts that may constitute crimes against humanity. These acts were allegedly committed between February and August 2018 in the territories of Shabunda and Mwenga, in attacks on some 15 villages that left more than 300 victims, including about 200 who suffered sexual violence.

"During the widespread and systematic attacks against civilian populations in several targeted villages, the defendants committed other atrocities,” Major Yoma Mukoko Apollinaire told the court in the prosecution’s closing argument, which followed that of lawyers for the civil parties (victims). “For example, they raped women and introduced objects into their vaginas." The Public Prosecutor's Office is asking that three of the five accused, including Koko di Koko, be found guilty of crimes against humanity and sentenced to life imprisonment. For the other two it is calling for acquittal, as no victim recognized them. "No link has been established between these two defendants and the Koko di Koko group. And none of the victims we defend mentioned them. They must be released," confirmed civil parties’ lawyer Charles Cikura in an interview after the hearings. 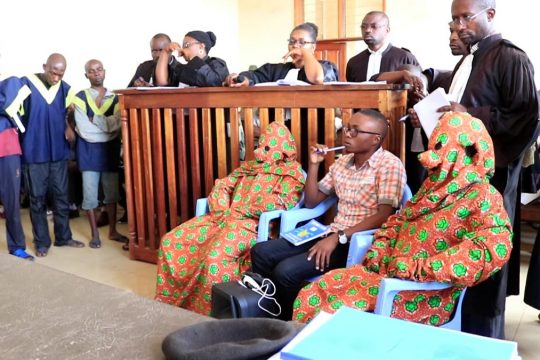 In Congo, braving fear to demand justice and reparation

The defence pleaded insufficient evidence and mitigating circumstances. "Neither the civil parties nor the Public Prosecutor's Office were able to demonstrate the degree of participation of each accused in all the offences charged against them. They should inform the court about the modus operandi of all the defendants present here, whether they acted as perpetrator, co-author or accomplice, which has not been done," said Jean Claude Nyakura, coordinator of the defence collective. His colleague, lawyer Esther Bashugi, stressed the point, saying the prosecution had exaggerated acts that she said were "isolated". "Let the civil parties and the prosecution clearly tell us how many murder victims there are, by whom were they killed, how, when and where. Let them show us the evidence of their death." She contested that the attacks were widespread or systematic and could thus have constituted crimes against humanity.

In response, the civil parties called on the court to consider the victims' testimonies as evidence. "The defence asked us to bring death certificates to prove that the people are really dead. But the jurisprudence is clear: for crimes against humanity, victim statements are enough provided they are consistent and there is no other evidence to contradict them," pleaded Arsène Mwaka, one of the civil parties' lawyers.

The court president, before announcing the judgment date, hailed the work done. "It was a fair trial," said Major Kabila Kangoyi. And it is not expected to be the last of its kind in the Kivu region, where it is the seventh such case in five years. The cases include the Mutarule, "Colonel 106", "Moroccan", Kavumu and "Koko di Koko" trials in South Kivu, and the Minova, ADF and Sheka trials in North Kivu. All of them concerned crimes against humanity committed by militiamen or soldiers. However, as Josaphat Musamba Bussy, a researcher with the Study Group on conflicts and human security in South Kivu, points out, such trials are likely to remain a regular occurrence for the inhabitants of eastern Congo as long as armed groups remain active there.

There are now more than 130 armed groups in eastern DRC, according to the Kivu Security Barometer, a joint project of the Congo Study Group and Human Rights Watch. "Some are punished, while others continue to commit atrocities. There is a vicious circle of crimes," Bussy points out. The same fears are echoed by psychologist John Leki, who is assisting victims in the Koko di Koko case: "Only the criminals who are arrested can become judicial cases. As long as many armed groups remain active, there are many crimes and silent victims. For example, Koko di Koko was one of three leaders in his militia. The other two are still at large and are certainly causing the civilian population to suffer.”

The limits of legal action

Charles Cicura, who has been defending civil parties for more than ten years in Kivu mass crime trials, knows the limits of legal action. "Certainly, when hearings are held as close as possible to victims and crime scenes, and when guilty parties are convicted, potential criminals are deterred. But judicial action alone cannot solve the problem of the crimes we are facing today in the east of the country,” the lawyer warned. “Political action, such as initiatives to disarm combatants, or military actions to track down armed groups that resist, are also needed. As long as the Congolese state does not restore its authority over the entire national territory, serious crimes will be committed because armed groups are carrying out atrocities in the areas under their control."