A few months ago Eric Nkeshimana arrived in Kampala, Uganda, fleeing the threat of Burundian refugee camps in Tanzania being closed. To survive, this former schoolteacher walks the dusty tracks of shantytowns in the Ugandan capital every day, selling second-hand clothing.

But, in his travels, the former Burundian state employee remains connected to the news of his country, in particular the work of the Truth and Reconciliation Commission (TRC). "What is the point of exhuming the bodies of people massacred years ago when, at the same time, innocent people are still being sent to their deaths?" he asks during a pause to quench his thirst. "What balm do these exhumations bring to the heart of a survivor whose parents, killed decades ago, are exhumed when he has just buried children or brothers shot dead by Imbonerakure militiamen from the ruling party?"

Charles Nditije, former president of Burundi's oldest political party, the Union for National Progress (Uprona), seems to be on the same wavelength. "We have indeed learned that the TRC is particularly concerned with searching for mass graves and exhuming the remains of bodies linked to the tragic events of 1972, 1988 and 1993. This is a good thing in itself, provided that the Commission has the means to properly identify the victims, circumstances and alleged perpetrators of these crimes. But where the problem lies, and this may disqualify the work of the TRC, is that it misses recent mass graves where the identification of victims, circumstances and alleged perpetrators would be more easily done. These include mass graves linked to the 2015 crisis, dozens of which are located throughout the country," said the Burundian political veteran.

"As these (recent) crimes were committed mainly by services or people mandated by the CNDD-FDD [National Council for the Defence of Democracy, ruling party] and they affect mainly people of the opposition and Tutsi ethnic groups, this only exacerbates ethnic divisions and resentments, especially as the country's highest authorities continue to use ethnic hate speech," says Nditije, now in exile in Europe.

However, the TRC's temporal mandate does not extend beyond 2008, the year in which the civil war in this small, poor east African country ended. "The government wants to stir up the demons of the past and create inter-ethnic tensions," adds Pierre-Claver Mbonimpa, a well-known human rights activist who is now a refugee in Belgium. "However, the Burundian population has reached a certain level of resilience and is not ready to kill each other for ethnic reasons. The militia can do it, but the population in the hills is past that stage. It is regrettable that the CNDD-FDD government is using the TRC to play this card, in an explosive political-ethnic context where the wounds of ethnic crises are not healed." He also accuses the regime of using the Commission for political ends by seeking, through these exhumations, to mobilize the Hutu electorate in the run-up to next year's general elections.

For former Burundian president (April 1994 to July 1996) Sylvestre Ntibantunganya, "it is inappropriate to carry out exhumations without giving the Burundian people an interpretation that is as objective as possible of what happened". "People need to be psychologically prepared," he told JusticeInfo by phone from Burundi.

Monsignor Jean-Louis Nahimana, who headed the TRC from 2014 to 2018 and also lives in Burundi, does not share this fear. "Whether the exhumations are selective or not, I think that’s something raised by lobbies who are trying to influence opinion for interests that have nothing to do with truth (...) The Commission's work has never caused friction or disorder," says Nahimana.  The clergyman is also proud of the Commission’s achievements under his leadership: more than 70,000 testimonies collected, more than 4,000 mass graves identified, enabling families to finally mourn their loved ones, and 20,000 "suspected perpetrators" having agreed to testify.

According to him, the problem is that in Burundi, "there have always been Hutu and Tutsi versions of events”. "Unfortunately, this fragmented memory, this ethnic memory is still deep,” he continues. “Burundi has developed the art of generalizing, we have never focused on individual responsibilities; small groups of Hutus or small groups of Tutsis have always perpetrated crimes and then they manage to play on the ethnic strings to manipulate people and hide their own responsibility." 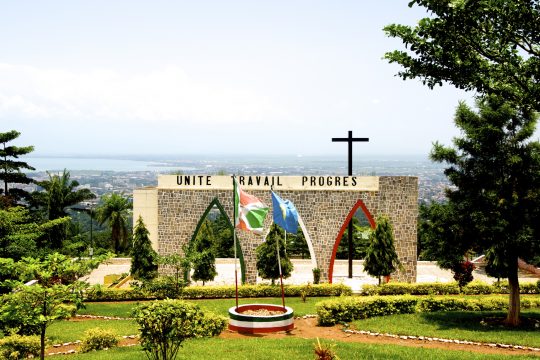 Exiled opposition activist Nditije remains convinced that "the Commission is far from independent".  "Of the 13 members of the TRC, everyone agrees that the vast majority come from the CNDD-FDD party or satellite parties or civil society associations affiliated with the presidential party," he says, and points to the current president of the TRC, Pierre-Claver Ndayicariye. The latter was at the head of the Electoral Commission during the 2015 elections, which saw the reappointment of Pierre Nkurunziza for a third term, deemed unconstitutional by the opposition and civil society. "Some people rightly think that Nkurunziza promoted him to this position as a token of his gratitude, which is a real insult to the victims of the violence linked to that election," says Nditije.

Ndayicariye is complicit in "violations of civil and political rights, and thus one of the key actors in the current crisis", according to human rights activist Mbonimpa.  "This commission is not independent and cannot reassure the Burundian population." He doubts it has the courage to hear opponents and exiled members of civil society like himself.

Former president Ntibantunganya says it is too early to judge the TRC’s contribution to the national reconciliation process. He thinks its composition is not a problem because the country’s ethnic groups and main political parties are all represented. "The TRC was born in a context of political crisis, a very controversial context," says Nahimana. “There has never been a consensus between the State, part of civil society and some opposition parties. The State has promoted a commission that does not take the justice aspect into account, while some opposition political parties and civil society organizations want a commission and a criminal court.”

Again without a national consensus, the October 2018 law that prolonged the TRC’s mandate by four years also extended it all the way back to 1885, the date of the Berlin conference on the division of Africa by the colonial powers. “On the one hand, this new time frame removes any legal obstacles to examining the colonial power’s responsibilities,” comments Burundian transitional justice consultant Louis-Marie Nindorera. “But it also opens the way to a heavy indictment of the colonial legacy, which will no doubt be used for opportunistic political ends. That serves to back the current conspiracy-theory based, anti-neocolonialist narrative, which puts all the blame on outsiders and minimizes our responsibilities as Burundians in our cycles of violence.

Nancy Ninette Mutoni, spokesperson for the ruling CNDD-FDD party, defends the amendment. "To cure evil, you have to attack the roots. Most of the security, political and identity problems currently facing the country originate from colonization, so we can’t ignore that," she argues. She says the TRC is independent of government and is proud that "this commission, which was provided for in the Arusha Peace and Reconciliation Agreement of 2000, was only set up and able to start work after the CNDD-FDD came to power". With regard to recent or current crimes, she says "the Burundian judiciary is working and is independent".

The current head of the TRC says all the criticism is politically motivated. “Let them talk. If they were sincere they would tell you we are working in a professional, independent way on all the Burundian victims,” Ndayicariye asserts. “The whole country has been affected by the crises.”

Copy this HTML into your CMS
Press Ctrl-C to copy
Burundi : Related articles