"We are saddened to note that after the political change at the top, our torturers continue to move freely in the country without being held accountable for the serious crimes they have committed,” said Joseph Musubao, a priest of the diocese of Kinshasa, in a statement issued on 1 February 2020. One year after the inauguration of Congolese President Félix Tshisekedi, "no strong signal has been sent by his administration in the fight against impunity for serious crimes", said representatives of 121 civil society organizations in the same statement, reminding him of "the serious crimes committed in Ituri, Beni, North and South Kivu, the massacre of followers of Bundu dia Kogo [religious and politico-cultural movement fighting for the defence of the Kongo people], the crimes committed in Tanganyika, in Kasai Central, Kasai Oriental and Kasai, in Yumbi, as well as during the violent repression of public protests calling for free, transparent and inclusive elections”.

The 121 NGOs made 13 recommendations, saying that the most urgent would be to set up a "joint specialized unit composed of civilian and military magistrates and investigators" to prosecute the perpetrators of these crimes before the competent courts. This joint units, if created, would allow the civilian courts, which have only had jurisdiction since 2013 to prosecute international crimes, to benefit from the experience of the military courts, which have been investigating these crimes since 2002.

Civilian courts have not been very active because of this "lack of experience and sometimes lack of will", says lawyer Guy Mushiata, human rights coordinator for the NGO TRIAL International. But Gentil Safari Kasongo, DRC researcher at Impunity Watch, thinks civilian courts can help obtain justice where military courts are limited. "When military courts had exclusive jurisdiction, we faced a number of problems, particularly related to the independence of military magistrates,” he told Justice Info. “Another problem was the impossibility of using the direct referral procedure in military courts. If the military prosecutor's office does not initiate proceedings, a victim cannot refer the matter to the judges. In the civilian courts, a victim can apply directly to the judge without going through the public prosecutor's office."

Many of the victims' lawyers interviewed confirm that the military courts are far more advanced, to date, in the repression of mass crimes. "The military courts receive the victims with dignity, deal with their complaints promptly, and the military prosecutor's offices make an effort to collect as much evidence as possible,” says lawyer Sylvestre Bisimwa, who, together with other Congolese civil society actors, has been campaigning since 2018 for the establishment of so-called people's courts. “The rights of the accused are taken into account. They respect the dignity of the victims by protecting them. They are less corrupt than the ordinary courts."

Kasongo thinks the fact that military courts are less corrupt could be because of their recourse to outside assistance.  “Several trials in recent years linked to serious crimes have been assisted financially, logistically and technically by the UN and NGOs,” he says, while noting nevertheless that "influence peddling by senior officers suspected of crimes constitutes a major obstacle to military justice, just as it does for civilian justice". For the moment, the facts speak for themselves: according to TRIAL, only one case for mass crimes has been tried by a civilian court, the Lubumbashi Court of Appeal. The latter handed down four convictions, at the end of 2016, in a trial in which 23 Bantu and 10 Pygmies were suspected of crimes against humanity and crimes of genocide linked  to violence between their communities.

The military justice system has dealt with some 30 cases of mass crimes since 2006, when the Songo Mboyo trial made history by qualifying rape as a crime against humanity for the first time in the DRC. Jean-Pierre Bemba's militiamen attacked a village at night and raped some 60 women. The judgment, handed down on April 12, 2006 by the military court in Mbandaka, in the west of the country, inspired others, including the recent "Koko di Koko" trial in Bukavu. 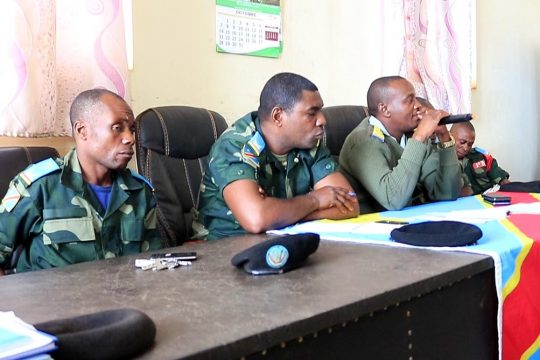 DRC: militia leader sentenced to life for crimes against humanity

"Most of the cases since 2009 have been tried in the provinces of South Kivu, North Kivu and Ituri," says Daniele Perissi, head of the Great Lakes programme at TRIAL International. "As of 2015, the fight against impunity for serious crimes has become a priority area for the reform of the Congolese justice system. Laws incorporating the Rome Statute of the International Criminal Court into Congolese law entered into force in 2016. Thanks to this, and to the improved support provided by international partners, we have seen an increase in recent years in the quantity and quality of the military justice system’s judicial response. For example, between 2016 and 2019, 10 cases of mass crimes involving approximately 30 defendants were tried by the military courts in South Kivu province alone. South Kivu continues to set an example at the national level.”

While the results of Congolese military justice are incomparably more than the ICC, which has convicted three Congolese military leaders, they nevertheless remain fragile and limited. "The head of state has made the fight against impunity, especially for serious crimes, one of his priorities," says Souleymane Kafana Coulibaly, coordinator of transitional justice and the fight against impunity at the UN mission MONUSCO. But, he admits, "the military courts are experiencing difficulties that hinder their proper functioning and therefore the proper administration of justice". He points to "weak financial and human resources, logistical difficulties, the precarious security situation, and difficulties in prosecuting members of armed groups and some senior officers." “Despite these difficulties,” says Coulibaly, “we have had some emblematic trials with convictions of members of the defence and security forces and armed groups, in South Kivu in the Koko di Koko case and in Ituri in the Djugu case." He recommends that the government should “speed up the installation of courts and tribunals throughout the country to bring justice closer to the people”.

On 14 February, the President appointed senior judges, which was his first decision on the judiciary in a year of office. Tshisekedi told the cabinet that this was "the starting point for major reform (...) to put an end to impunity, injustice and corruption". With regard to the magistrates Tshisekedi appointed president and prosecutor general of the Military High Court, they had already been appointed by his predecessor Joseph Kabila to the same posts.