In Sonora, Mexico, the search for a missing loved one combines science, magic and faith. Virginia wanted to follow in her father's footsteps by studying agronomy, but after his disappearance, she finally chose to study criminology. "I promised myself that I would find him, and my studies are helping me in my quest," she tells me as she pulls from her wallet an already yellowed newspaper clipping with the missing person's name on it. "This clipping will stay there until it disintegrates. I will never stop looking," she adds.

Virginia is one of the "Madres Buscadoras" (literally, the searching mothers) of Sonora (northern state of Mexico), one of the 70 collectives of "searchers", "rastreadoras" (trackers) and "warriors" - as they are called - in Mexico who dedicate themselves day after day to searching for loved ones who disappeared in their own country.

In recent years, enforced disappearances have resurfaced in Latin America in a general context of globalized neo-liberal democracies and economies focused on massive extraction. In the case of Mexico, enforced disappearance is combined, in a complex manner, with the disappearances of "individuals". In 2017, Mexico approved the General Law on the Disappearance of Persons and Disappearances Committed by Individuals, which aims to curb "multi-actor" disappearances. However, this law is far from being effective. Between 2006 and January 2019, the National Commission for the Search for Persons in Mexico counted 61,647 missing Mexicans.

As in Chile, with the Association of Families of Disappeared Detainees (AFDD), and in Argentina, with the Mothers and Grandmothers of Plaza de Mayo, it is mainly women who go in search of their relatives, travelling the length and breadth of Mexican territory.

In addition to these collectives, the Central American Mothers' Caravan has been crossing Mexico every year for the past 15 years in search of relatives who have disappeared while trying to reach the United States. They travel all over the country showing the photo of their son or daughter on signs that have become emblematic of the painful question: "Where are they?” They put up posters on the streets, and they walk through hospitals, prisons, rural areas, and cemeteries. They talk to associations, journalists, the authorities, and from time to time they receive a clue, an anonymous call. And sometimes they manage to locate their loved one, alive or dead.

We accompanied the Madres Buscadoras of Sonora to three places where they had been given a "pitazo", that is, where someone had anonymously told them that they would find human remains. We went out in vans, with shovels and "varas", T-shaped iron instruments that they bury in the ground and then smell them. If the "vara" stinks, it may be because there are human remains in the process of decomposition underground. They may even belong to a person they are looking for. But they know that bones do not "smell like death" and that with this method they will only find recent remains.

On the first day of the search, the mothers are accompanied by Don Manuel, who claims to be endowed with a special gift: with the help of his pendulum, he is able to track the energy of the dead. The mothers entrust him with photos bearing the faces of the missing, and Don Manuel chooses one of them, puts it in front of his pendulum and waits to see if it "wants to work" and indicate where to bury the instrument and dig. This time the face in front of the pendulum is that of Carmen's son. She takes hold of the object and begins to talk to her son, asking him to direct her so that at last she has a suitable place to mourn him, that is, a grave with his remains.

But Carmen tells us she doesn't understand why Don Manuel insists on taking the photo of her son and not the others. "I want to find him, and at the same time I don't," she confides. This mother would like to find his remains and no longer live in the uncertainty of her son's disappearance, but at the same time uncertainty allows her to keep the hope that he is still alive. All these women live in this state of torture and ambiguity.

Juana is also waiting in a small town in Sonora to find her son who disappeared five years, three months and several days ago. She tells us how they took him away one night, at three o'clock in the morning. Since then she has had no news. "Since his disappearance, I feel I am no longer living,” she says, sobbing in pain. “And if I am alive, it is to look for him. I will never stop looking for him.”

Juana is still waiting for him to call her, for him to reappear. Her story still sounds so vivid, so rich in small detail, as if his abduction had taken place that very day. For these searching women, time has stood still at the moment of disappearance. Their loved ones are neither alive nor dead, it is an ambiguous loss, as therapist Pauline Boss calls it.

That's why "we can't say they're dead," says Virginia. "I can't say goodbye to my father. In my heart of hearts, I can think that after so many years he is most likely dead, but there is no proof, so until I am sure, I will keep looking for him." Virginia finds it shocking that some of her God-fearing relatives wish her father to "rest in peace”.

But faith in God is a consolation for some of these mothers, sisters and wives. Or more precisely, it is a half-consolation. Many invoke it, implore it for their loved ones and pray every day, go to Mass and ask the parish priest for advice. But, just as some psychologists suggest they "say goodbye" to their departed loved ones, some priests ask them to "leave them to God". A young woman, who was pregnant when her husband was kidnapped, confides to us: "I have nothing to give to God, I don't have his body, I have nothing. I don't know where he is, what can I give to God?"

To date, the Madres Buscadoras de Sonora collective, which brings together families from all over the state and has more than 200 members since it was founded in 2019, has recovered 79 remains. These are small groups that go out every weekend to search for the bodies, using their own resources, paying for petrol, food, etc.

The second time we followed the Madres in their quest, we found part of a skull and a jawbone. During the other three outings we found only pieces of clothing and ground full of small white crystal-like stones with a strong chemical smell. These could be remnants of caustic soda, used to dissolve bodies.

Disappeared on their way to the United States

We also found searchers on the other side of the border, on the US side. From Tijuana, it takes me no more than 15 minutes to cross the border and join the Armadillos Binacional, who agreed to meet us in a cafeteria in San Diego. The youngest of them, a boy in his twenties at the most, says, "My parents crossed this Arizona Desert. Like them, a lot of people are suffering over there and are trying to come here to get what I have, an education, a job. Many Armadillos arrived with their parents from Mexico without papers and identify with the people trying to cross the border.

The Armadillos began what they call their "search work" two years ago for their brothers on the other side of the border, of whom they have found 22 bodies or remains. It is voluntary work that they do outside their working hours, with their own means and donations from their community. Although the collective is composed mainly of men, they say women play a very important role. "My wife supports me, she prepares everything for the search work: water, clothes, lunch.”

At the weekend, they drive all night from California to Arizona, since 90% of missing persons reports come from that state. Indeed, since urban crossing points were closed in the 1990s, a "funnel effect" has occurred, forcing migrants to cross through extremely dangerous remote areas such as the Sonora Desert and Arizona. It is a "huge desert, where you walk for five minutes and you already don't know where you are," says Caesar, one of the founding members of the collective.

Solidarity with the other side of the border

So Madres Buscadoras de Sonora and Armadillos Binacional have joined forces to search together in this land of disappearances. Because in this area of Latin America, beyond the immense border walls, beyond the legal and illegal traffic, there are all the disappeared.

From the Arizona desert to Chiapas and further south, where the United States has extended its borders and its war on drugs, a dense web of absences has been woven across families, generations and nations. Just as these wars (and their economies) are becoming internationalized, this web of missing persons and the search for them also crosses borders. This is a phenomenon of disappearance that leaves not scars but open wounds, which people from Mexico to the United States try every hour of every day to bear with faith, magic and science, and by weaving cross-border solidarity.

This article was written with the collaboration of Basem Siria, exiled photographer and human rights cyber activist, and journalist Lorenza Sigala. All the names of the interviewees are fictitious, except for the leader of the Armadillos Binacional collective, who asked us to keep his first name. The fieldwork was carried out within the framework of the project "Sortir de la violence", funded by the National Research Agency (ANR).

This article, slightly modified and translated in english by Justice Info, with the agreement of the author, was first published on The Conversation in spanish.

Copy this HTML into your CMS
Press Ctrl-C to copy
Mexico : Related articles 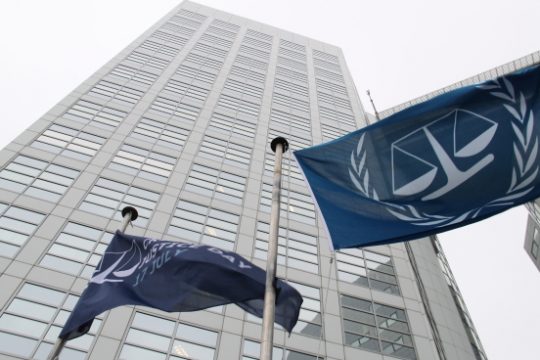 Week in Review: Impunity in Mexico, disappointment in Georgia
Most read