“All four of the defendants have been summoned on the suspicion of first: to cause flight MH17 to crash resulting in the deaths of all occupants (…) and second the murder of 298 occupants of MH17,” prosecutor Dedy Woei-a-Tsoi told the court at the opening of the trial, on March 9. “In the opinion of the public prosecutor (the suspects) organized that around 17 July 2014 a deadly weapon – a Buk Telar – was transported to east Ukraine (and) brought to a location from where a missile was launched and that missile hit flight MH17”, she said.

The Dutch trial against the four men started in their absence. The accused are three Russians – Sergey Dubinskiy, Oleg Pulatov and Igor Girkin – and one Ukrainian – Leonid Kharchenko –, who had senior positions in the pro-Russian militias in Eastern Ukraine in 2014 [read our box]. They are charged as co-perpetrators for providing an anti-aircraft missile system to the militia who allegedly fired at the civilian aircraft.

Over five years after the crash, prosecutors thus revealed a part of their strategy by making it clear they were primarily charging the suspects with murder and intentionally shooting down an aircraft, both punishable by a maximum of life in prison under the Dutch law. One of the key questions about the prosecution’s strategy being whether the suspects would also be charged with war crime.

“By charging premeditated murder they seem to be saying this is not a case of international humanitarian law,” assistant professor of international criminal law at Amsterdam’s Free University Marieke de Hoon told journalists after. This would avoid, she added, the whole trial focusing on combatants’ immunities and whether the direct perpetrators who allegedly shot down the plane had taken sufficient measures to identify whether they had a military or civilian target.

However, on Monday prosecutor Ward Ferdinandusse wanted to stress that prosecutors rejected the idea that any combatant immunity would apply in this case, stressing “it only applies to regular military personnel under the supervision of a state in a group that respects international humanitarian law and rules of warfare”. “War is not a license for violence by all, against everybody,” he said. “Our provisional conclusion is that the suspects in July 2014 were not entitled to claim combatant immunity and had no right or excuse to resort to violence in eastern Ukraine,” Ferdinandusse added.

In 2018, the international Joint Investigation Team which has looked into the crash said their probe showed MH17 was taken down by a Buk missile that came from the 53rd Anti-Aircraft Missile Brigade of the Russian Federation. The missile was brought from the brigade’s Kursk headquarters to a field in Ukraine where militias fired it on MH17, investigators said. According to de Hoon, the prosecution will likely make the argument that “if you know you are bringing such a murderous weapon to a zone where there is no combatant privilege, you have taken that role in close conscious cooperation to bring down that flight,” making the Russian and Ukrainian suspects co-perpetrators. 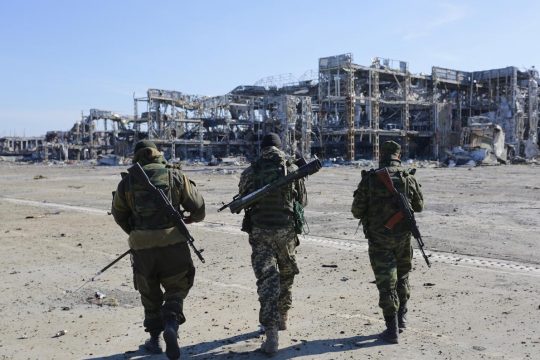 None of the suspects appeared in court, but Pulatov sent lawyers to defend him. Pulatov was one of Dubinkskiy’s deputies in the self-styled Donetsk intelligence services. Under the Dutch system if you send a lawyer to represent you it is no longer an in absentia trial. For the other three accused, who did not appear or send representation, the court ruled the case could continue in their absence. “The court will allow due process to prevail and in the case of Girkin, Dubinskiy and Kharchenko they will be tried in absentia,” presiding judge Hendrik Steenhuis said.

While in absentia trials are unusual in international justice, with the exception of the Lebanon tribunal, such proceedings are not uncommon in The Netherlands. Under the Dutch inquisitorial system, the standard is that both the prosecution and the judges are magistrates that work towards finding the truth about what happened and who can be held criminally responsible. As such the prosecution’s job is not considered to be getting the highest possible conviction but ensuring a fair trial, including taking into account potentially exculpatory evidence for suspects.

Dutch Prime Minister dismissed potential concerns about an in absentia trial, saying the Dutch legal system “has an A1 reputation”. De Hoon points out that the Dutch rules for in absentia trials have also withstood the tests of the European Court of Human Rights.

This week’s procedure was described by the court beforehand as a stock taking exercise, to see where the prosecution is with its case, to check if defendants or their lawyers turn up, and to assess if additional investigations are needed. Opening statements and hearings on the substance on the case are likely months away.

Igor Girkin (Russia) – aka Strelkov (the shooter) – is a former colonel of the FSB Russian security service. In 2014 he was appointed ‘defence minister’ of the self-proclaimed Donetsk republic, the Ukrainian separatist region from where the missile that hit MH17 was fired.

Oleg Pulatov (Russia) is a former member of a special military unit of the GRU. Pulatov was one of Dubinkskiy’s deputies in the self-styled Donetsk intelligence services.

Leonid Kharchenko (Ukraine) has no military background but at the time of the downing of flight MH17 he was the leader of a militia around Donetsk.

Prosecutors say the three Russian suspects kept close ties with the Russian military establishment which enabled them to get an anti-aircraft missile to the area around Donetsk with the help of Kharchenko on the ground.

Caught killing on camera in Deir ez-Zor
Most read

In France, the lengthy Syrian investigations