In March 2015, President Uhuru Kenyatta, while making a State of the Nation address before Parliament, apologised on behalf of the government for the violations Kenyans have suffered for decades. He did not acknowledge that such an apology was recommended, two years earlier, by the national Truth, Justice and Reconciliation Commission (TJRC) in its final report.

In March 2018, Kenya’s top political leadership made a frank assessment of what ails the country using such terms as “ethnic antagonism and competition” and “inclusivity”. But the statement Kenyatta made with opposition leader Raila Odinga did not mention the TJRC or its report either, even though they had addressed the issues raised in their statement. As a candidate for the August 2017 presidential election, Odinga – and his lieutenants – had made the TJRC report a campaign issue, calling on the government to implement it as a way of addressing historical injustices in Kenya. Since his rapprochement with Kenyatta he has not mentioned the TJRC report.

From task force to truth commission to task force

After months of rising tensions in the country Kenyatta and Odinga agreed to work together. Prior to March 2018 Odinga and other opposition leaders said they would not recognise Kenyatta’s government after successfully challenging the results of the August 2017 presidential election and boycotting the repeat October 2017 election. On January 30, 2018, Odinga held a ceremony attended by hundreds of his supporters in which he was sworn in as the people’s president, further raising tensions. In response, the government declared opposition protests illegal with police disrupting a number of them, except the swearing-in ceremony.

Now willing to reconcile, the two opponents went on to appoint a taskforce to seek public views on, among other things, how Kenya and its citizens could bridge what divided them.

The TJRC had spent almost four years doing something similar, collecting 40,000 statements from Kenyans across the country on their grievances, sense of marginalisation, etc. These statements formed the basis of the Truth Commission’s four-volume 2,210-page report presented to Kenyatta on May 21, 2013. This work was ignored by Kenyatta and Odinga.

After 17 months of listening to and receiving views of as many as 7,000 Kenyans all over the country, the taskforce – popularly known as the Building Bridges Initiative – produced a 156-page report in October 2019. What the TJRC had to say about how different ethnic groups who mistrust each other can be reconciled or how to resolve issues brought up by an election dispute did not make it into the taskforce report.

No support from the government

The TJRC was formed under more tragic circumstances that the 2018 task force. Historical injustices were identified as one of the long-term issues underlying the violence that followed the December 2007 presidential poll in which more than 1,000 people were killed. Odinga was a candidate in that 2007 presidential election. As part of the mediation process to end the bloodshed that followed, Odinga and the incumbent President Mwai Kibaki agreed to the formation of the TJRC and a coalition government in which Odinga became prime minister.

In May 2013, after Kenyatta received the TJRC report, it was tabled in the National Assembly as part of the implementation phase of the report. The TJRC, whose mandate ended with the publication of the report, recommended the government form an implementation committee to oversee and coordinate the work needed to make the TJRC’s wide-ranging recommendations a reality. The TJRC even provided a draft bill for the National Assembly to consider to give such an implementation committee legal backing.

The fact that Kenyatta’s administration, which commands a majority in the National Assembly, has not overseen a similar process to implement the TJRC report shows it does not support the report. But this does not mean the administration preceding Kenyatta’s gave the TJRC process strong backing.

Kibaki’s election in December 2002 brought to a close the 24-year dictatorship of Daniel arap Moi. The new president secured a mandate to execute wide-ranging reforms in Kenya. Among the reforms Kibaki’s new government was expected to initiate was a process looking into the numerous human rights violations that occurred under Moi’s watch. In April 2003 Kibaki’s government appointed a taskforce to look into whether there was public support for a truth commission. Four months later, the taskforce concluded there was overwhelming support for such a commission. It recommended that the government should form such body by June the following year. That did not happen. It took Kenya being brought to the precipice of collapse by the violence that followed the December 2007 presidential election for Kenya’s top political leadership to support the formation and work of a truth commission.

In the past seven years it is not just implementing the TJRC report that has proved to be politically inconvenient. Having the report available on government online portals has itself long proved difficult. The TJRC had its own website and in May 2013 it made the report available on its website. Eventually that website was discontinued since the TJRC’s mandate ended with the publication of the report. And so, for years, the TJRC report was not available on any government website. The only place where it was to be found was on the website of the Seattle University Law School where Ronald C. Slye, one of three foreign members of the TJRC, is a professor. Today, at least, it is made available online by the national Commission on Human Rights. 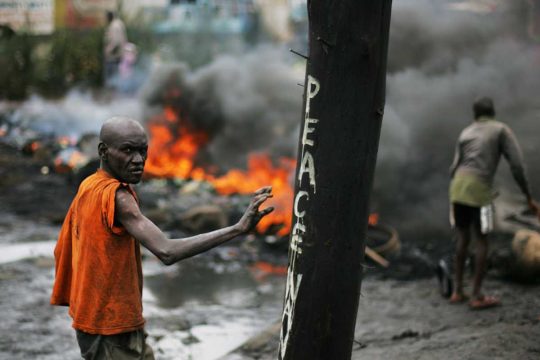 7 years on, let’s dust off the Kenyan Truth Commission final report
Most read