To some people it is a soothing thought to believe that torturers (wherever they may come from) are “different” from the rest of us - an otherworldly ilk of barbarians or sick individuals driven by the pathological pleasure of inflicting pain on their victims. What they did, we’d never do, so we like to think.

It might be disturbing to remind those “belles âmes” (as we say in French) of a few biographical details of Kaing Kek leu, aka Duch, the former executioner in chief of the Tuol Seng central Khmer Rouge detention and torture center, who just passed away in Phnom Penh at the age of seventy-seven. Duch, the son of Khmer peasants, was endowed with outstanding qualities: he had an intense desire to learn, he was self-disciplined and had the passionate energy of a hard worker. Unlike several future prominent leaders of the revolution, he didn’t make it to the prestigious Paris universities, but he did manage to study at lycée Sisowath, the best French school in Cambodia. A school teacher, he taught mathematics and was also an avid reader of French literature; more than sixty years after his French baccalaureate, observers were fascinated, during his trial, to hear him quote – with feeling and accurately – from romantic 19th century poet Alfred de Vigny. Young Duch was an idealist who was not satisfied with the improvement of his own condition: he was deeply pained by the miserable living conditions of most Khmer peasants and burned with the fire to join the fight to change it for the better. Like most leaders of the revolutionary movement, he detested corruption, was altruistic and devoted to a cause he wished to serve with all his might.

Before he took on the responsibility of S21, he had nurtured his organizational skills as the head of M13, the jungle camp where young French anthropologist  François Bizot was detained. He was convinced in his heart of hearts that every detainee – Bizot included – was an enemy of the revolution, a CIA spy, a threat to the ongoing wave of change. The young Kampuchean revolution was under attack from all sides: it was only fitting, he then believed, to execute the accused without wasting time on technicalities like “due process” : in order to cleanse the new society, these dangerous individuals should be eliminated mercilessly; in the process every means was justified to have them confess their crimes. Following his logic to the end, Duch became personally engaged in commissioning   innumerable acts of torture and executions.

Although Duch claimed without any precision or evidence that he spared a few other M 13 prisoners, Bizot stands as the only individual ever to fall into his hands and survive.  Reminiscing about the young man he’d known in the jungle, Bizot portrayed not a monster but a human being; some among the families of Duch’s victims were offended and hurt. How dare he, they contended, exonerate this mass murderer from his crimes? Bizot himself, summoned as an opening witness during Duch’s trial in 2007, made it very clear that in his opinion, the only “just sentence” for Duch would have been one apportioned to his victims suffering. When his judges sentenced the torturer to life rather than death, they unwillingly attained that goal: throughout the last ten years, abandoned by his own family, an object of universal hatred, Duch had an eternity of empty days and interminable nights to reflect upon the extent of the horrors he participated in with zeal, his respect for hierarchy and his pride of a job well done.

Before he rejected the accusations against him, his judges and his own lawyer, Duch had expressed himself with honesty and kneeled in front the families of victims, begging  forgiveness. Even that backfired: how could the very same man who had organized the torture sessions be sincere and experience a genuine sense of guilt and regret? The words “Kill them all!” was written by his own, careful hand, next to a list of children’s names. That cold-blooded human being was very obviously putting on an act, a macabre comedy that was all the more insulting to the memory of the victims. I don’t believe he expected any kind of indulgence, let alone an absolution – just some basic level of understanding, that never came.

It is now too late to ask him the question – we’re left with his final silence. Bizot himself, who was never his friend although they had long conversations during his months at M13, has been inundated with requests for interviews and statements: he maintains that he has nothing to say. He wrote what he had to write in two memorable books (The Gate and the Silence of the torturer) and has no interest in providing its daily intake of nuggets to the media fast food restaurant. Human evil remains as simple as ever for those who believe in the existence of “monsters” - as for the rest of us, we’re left with the final silence of the torturer and the painful, impenetrable enigma at the heart of our condition.

I remember a French journalist interviewing Doctor Haing Ngor, a survivor of the Khmer rouge camps where all his family had perished: “In your book your recall the time when the Vietnamese army invaded Cambodia and you were released from the camp where you were detained. You recount a specific moment when you and you companions caught one of your guards and beat him to death. I have to say” the journalist added – and I was almost ashamed to have to translate his words, “that, as a catholic, I found this scene deeply shocking.” There was a long silence from the man who, after emigrating to California, had accidentally become a movie star by playing the part of the Cambodia protagonist in the Killing Fields, a role for which he had received an Oscar. His answer, delivered in a low voice, came in halting words: “You know, sir, these people had killed our loved ones, they’d starved and beaten us. What did you expect? That we call a lawyer?” There was a glow of pained incomprehension in the eyes of the devout catholic. He would never, in the name of God, have done such a horrible thing, or have taken part in it.

Neither would have Duch, for that matter – and yet he turned into the over-zealous organizer of innumerable crimes; alone in the box of the accused, he looked back upon the abomination with a perceptible horror of himself; also he was able to depict with clarity the political and human mechanics of the bloody process. He was no gray, banal, boring Eichmann: he had not been an anonymous cog in the banality of the Evil wheel, but a conscious, enthusiastic adept and actor; yes he lived in fear but he was genuinely obsessed with carrying on impeccably his murdering mission. Unlike the Nazis who, at the time of their debacle, were doing their best to burn all traces of their crimes, Duch remained a dedicated civil servant right until the end, preserving the carefully filed archives where his future judges would find ample evidence of his daily involvement in the abominations carried out by a regime, who in its search for human paradise, had succeeded in establishing a blood-freezing version of Hell in the old Buddhist kingdom of Angkor.

His former mentors were either dead or dying, so as a result Duch found himself in utter, abject solitude facing an international justice burdened with multiple, uncertain goals. What was at stake, exactly? Was the trial about assessing one man’s personal responsibility? Was it meant to offer consolation to the families of the victims? Should it serve as a history lesson? As far as the latter is concerned, it remained foreign to the vast majority of a population that was too busy in the necessities of surviving on a daily basis to indulge in the luxury of the “duty of memory”.

Caught in a crossfire between lines of conflicting injunctions, it may have occurred to the weary torturer that he wished he could have died at the hands of Haing Ngor and his comrades: the international justice that was forced upon the corrupt Phnom Penh regime sentenced him to life in a rustic but decent prison cell. One can imagine him, in his final moments, uttering the closing verses of Vigny’s poem, The Death of the Wolf:

“He stares at us and then lies down,
Licking the blood on his mouth
Then, without deigning to know the way he perished,
Closes down his large eyes
And in silence dies.” (…)

“To moan, to cry, to pray are all equally cowardly.
However painstaking and heavy,
With utmost energy
Carry on with your duty,
Follow the Way that Fate has assigned thee
Then like me, suffer and die silently.” 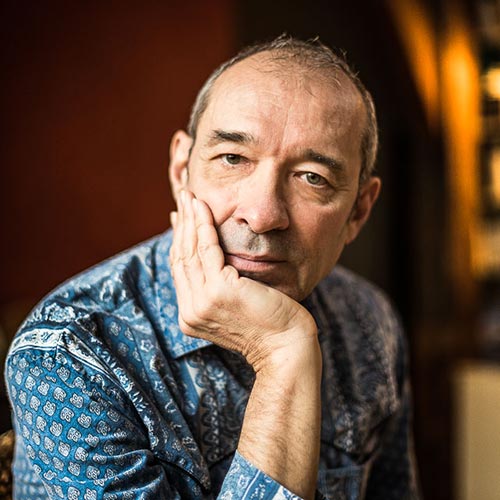 Antoine Audouard is a French writer based in Paris, New York and Fontvieille (Provence). His novel Farewell my only one was translated into 14 languages.