The light and atmosphere are theatrical at the Bamako International Conference Centre. Isac Dara, 42, testifies and recounts, in front of five commissioners of the Truth, Justice and Reconciliation Commission (CVJR) that day of June 9, 2019, which was almost his last.

Around 5pm, gunshots tore into the usual Sunday quietness. Armed men entered his village in central Mali, Sobane Da, and fired on sight. From a distance, Isac saw friends and acquaintances struck down by bullets. In panic, he took refuge with several people in a house. The assailants, whom he has not been able to identify, set fire to the house and put one of them in front of it to make sure that everything burned. Inside, amidst cries of pain and burning bodies, Isac asked his God: "Am I destined to die like this?" He resolved not to die and, with part of his body burning, stepped through a window and fled.

More than a year later, he finds it difficult to talk about this trauma. He still bears the scars. In front of the audience, he rolls up the sleeves of his cotton shirt to show a horribly burned arm. "I can no longer work, nor can I do much," he laments. The silence in the room becomes heavy, and one of the commissioners, overwhelmed by emotion, cries. Ousmane Oumarou Sidibé, the president of the CVJR, questions Isac:

“What state of mind are you in? What are you waiting for?”

“The country is sinking, and we can no longer return to our village. We have nothing left, we want the authorities to help the victims.”

This lack of assistance to victims was mentioned several times during the hearing of the twelve witnesses at this second public hearing of the Commission - organized one year after the first one, at the end of 2019. Isac was accompanied by another survivor of the June 2019 attack, whose story preceded his own. Lazare Dara lost 14 members of his family on that day. His father, his mother, his children burned alive, and his brother was shot in the head. He said he and other survivors buried no less than 102 bodies. The initial toll of the attack announced in the media was 95 victims, which was later revised downwards by the authorities. One thing is certain: the village of Sobane Da, in the Mopti region, which has been plagued by violence since 2015, was reduced to ashes.

The massacre at Sobane Da shares similarities with that of Ogossagou, perpetrated a few months earlier. Also located in the Mopti region, the village was razed to the ground and most of the inhabitants decimated. On March 23, 2019, Ogossagou caused a real shock wave in the country, with images of charred children and tangled bodies stirring up emotion among Malians. The story of this event was therefore eagerly awaited. Giving the floor to the victims, the president of the Commission solemnly announced: "Mali hears you, the world is watching you". The hearing was broadcast live on the national channel.

Wearing a cap and surgical mask on his face, Abdoulaye Barry, 52, stands in front of the commissioners. The lights in the room dim, only the commissioners and the victims are lit. Barry begins his story. Something happened the day before, he says. A skirmish between Dogons and some young people from the Peule community. There were exchanges of fire until the gendarmes arrived. The next day, at dawn, gunshots woke the villagers up. The weapons were automatic this time and no longer the traditional rifles of Dogon hunters. Barry entrusted part of his family to the village scholar, before taking refuge in another place. After the massacre, he returned to his land, which he no longer recognized. On the way to the scholar's house, the shepherd stepped over many bodies. The official death toll of the massacre communicated by the authorities was 157.

Still hoping to find his family, he approached the burned house. With charred bodies all around and a stench of death, he found he had lost several family members including his young son who died in the scholar's arms, both of them asphyxiated, he says. With other villagers, he decided to bury the bodies with dignity. But the charred limbs fell off. They had to use shovels to "pick up" the pieces. In the midst of this desolation, he saw the remains of his sister, who was seven months pregnant. When he picked her up, the baby fell. Barry pauses in his testimony and bursts into tears, at length. The Dogon militia Dan Na Ambassagou was accused of being responsible for the killing by the authorities, who disbanded the movement the day after the attack, without however managing to disarm it. In spite of the pain, Barry concludes with a call for peace: "If the Fulani kill all the Dogons, or the other way around, no one will have won, we need to come to agreement, it is a matter of our salvation.” 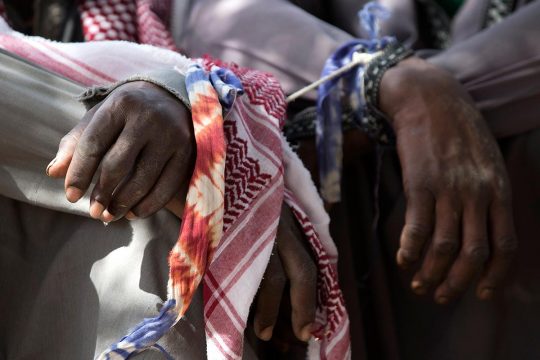 Malian victims to get a voice for a day

Several victims were still searching for answers after this hearing. The TJRC offers them only a framework to express their suffering. Unlike the courts, it does not seek to establish the guilt of alleged perpetrators. Nor does it confront victims and perpetrators, as has been the case with other truth commissions. The question "why?" has come up very often. Mariam Cissé, 46, asked why her father was killed by the Malian army at Léré in northern Mali. Young Aboubakar Saddek Ould Mohamed, 19, asked the same question. He said his father and uncle were killed by Malian armed forces in 2013 in the city of Timbuktu. "I want to know why, I want my father to be brought back to me, or else the State to take care of his family," said the man who had to abandon his studies to take care of his mother and siblings. "The message has been heard," replied the president of the Commission.

Four more public hearings are scheduled before the Commission’s mandate ends on December 31, 2021 and the publication of its final report. The TJRC says it has received 19,000 depositions on human rights violations since its creation in 2016