Lawyer and photographer Hèla Ammar recently published a book of images and texts on the formerly taboo subject of Tunisian prisons. Searching for the truth with the eye of an artist, she reveals a world of degradation, injustice and abuse. The transition to democracy has hardly reached the prisons. Hèla Ammar is one of five Tunisian artists whose work is currently on show at the Museum of European and Mediterranean Civilizations (MUCEM, Marseille, France) in an exhibition called “Fragments of Contemporary Tunisia” (May 13 to September 28, 2015). Interview by Olfa Belhassine for JusticeInfo:

It’s almost unheard of in Tunisia that a member of civil society gets into the prisons. How did you come to visit twelve of them?

In February 2011, I was part of the national commission investigating what happened during the revolution. Its mission was to investigate human rights abuses committed between December 17, 2010, when the popular uprising started, and October 23, 2011, the date of the Constituent Assembly elections. I was to interview prison officials and prisoners about the deaths, mutinies and arson that happened in Tunisia’s prisons during the revolution. At the time, the commission had full access. We could meet the prisoners in their cells, go everywhere in the prisons and even take photos. 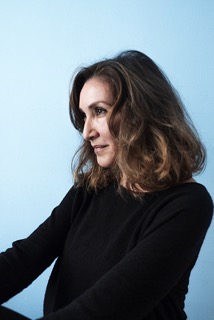 A real window of freedom had opened. The prison staff were only too happy to talk about their hard working conditions and the prisoners wanted the outside world to know the reality of their jail environment. I came back a year later for an investigation on death row prisoners’ conditions, commissioned by an abolitionist association. But things had changed. We were no longer allowed to visit the prisoners in their cells, nor to take photos. The atmosphere had changed. Disappointment had returned in the prisons and the first arrests of Salafists had created high tension.

What really happened in the country’s prisons during the revolution?

The prisoners had TVs in their cells and so were aware of everything that was happening on January 14, 2011, that is, calls for citizens’ action, paranoia about snipers, arson attacks on police stations. The prisoners were also gripped with fear and they took advantage of lower security to attack their jailers with metal slats from their beds, burn their mattresses, try to break down the doors of their cells and get out. Tear gas was thrown inside the cells, and real bullets fired by the security forces. Prisoners were killed and maimed, seriously injured or burned alive. The prisoner uprisings left around 300 people dead and injured. Later, there were reprisals against those who had mutinied, including torture, solitary confinement, deprivation of adequate medical care, intimidation. The families of those who died received compensation, like for the martyrs of the revolution. It was deemed that the State had failed in its duty to ensure prisoner security.

The prisons are like hastily arranged squats. They are former colonial farms or very old buildings that are badly lit, dirty, stinking, cold and damp in winter and stiflingly hot in summer. They do not comply with security norms. So mutinies are possible. The Tunisian jails are overcrowded, they have double their capacity of inmates. First-time petty offenders are mixed with serial offenders, people in preventive detention, dangerous criminals and people with long sentences, which is against both Tunisian and international law. So instead of being a place of reform, prisons have become a school of crime, which is made even more the case because overcrowding means training workshops no longer happen. Young serial offenders say they “learned everything they know” in jail.

You also visited death row. Is that the real prison hell?

During my first visit in 2011, the death row prisoners were kept in a building situated between those for the homosexuals and the prisoners with TB. They had no contact with the outside: no food baskets from the family, no visitor rights, no mail. They were really the forgotten of the planet. As if they were considered already dead as soon as they were sentenced. Even their families didn’t have any way to know if they were still alive. And then two years ago former president Moncef Marzouki commuted death sentences into life sentences. Today people sentenced to death are kept with other convicts and have the same rights. Their conditions have improved little by little. On December 20, 2012, Tunisia signed a moratorium on implementing the death penalty, which is certainly an important decision, but it could be lifted at any time and the only real solution is abolition of the death penalty, which is supported by part of Tunisian civil society.

Why do you think prisoners are still subjected to torture, humiliation and abuse on a daily basis, even after the revolution and the political changes that Tunisia has been through?

Unfortunately in Tunisia like in other countries that have lived under a dictatorship, people still think that to punish the prisoners you need to not only deprive them of freedom but make jails a place of humiliation. This normalization of violence shows poor knowledge of human rights. And yet a lot of prison staff, whose financial and working conditions are also hard, say today they want to be retrained or redeployed so the prisons can be managed differently. “We have only violence as a way to enforce the rules and maintain order,” they say. “What else can we do when the jails are so overcrowded?” Today we need to completely reform the prisons: the whole prison environment, introduce alternative punishments for petty criminals, put the focus on rehabilitation so as to cut the rate of re-offence, and reform the statute of prison staff. Everything needs doing, absolutely everything. In 2012 the Justice Ministry signed an agreement with civil society organizations under which they could enter the prisons and monitor the prisoners’ conditions. The reports of these organizations must be made public, so as to end the law of silence that has reigned up to now on Tunisia’s prisons!

Could you explain to us your artistic choices? Why did you choose black and white and super-impose images for the photos in the book?

Black and white is often used for documentaries. Like a timeless testimony, it crosses the frontiers of time. Black and white reflects perfectly what I felt inside the prisons. I entered as if walking through a wall, and inside you lose sense of space and time. If I had not super-imposed images, which preserves the anonymity of the people and the places, my photos would have been quite voyeuristic. They would have deprived the prisoners of the little dignity they are trying to hang on to.

Also, as I passed from one cell to another, from one person’s suffering to another, what I saw added to the emotional shock. Hence the super-imposition of a woman’s gaze, that of a model I work with, on a shot of prison life. The text in the book gives free expression to the prisoners and jailers, while the photos reflect my thoughts and feelings on the prison environment. 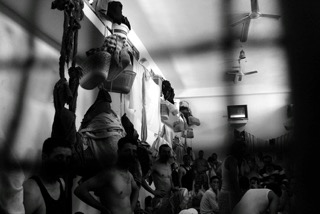 Copy this HTML into your CMS
Press Ctrl-C to copy
Tunisia : Related articles
Tunisia: artists take up the torch of remembrance
Tunisia: A “reconciliation” law that goes against transitional justice
Most read
Did Christopher Columbus commit genocide?
Sexual abuse in the Church: map of justice worldwide
Other - Related articles
UN commission on Ukraine crimes “will seek to identify persons and entities” responsible
Viktor Bout for Brittney Grinner: a prisoner exchange that forgets Liberia