Dressed in jeans and a navy blue hooded sweater, S. is the fifth plaintiff to testify this February 19 before the court in Bellinzona, in Italian-speaking southern Switzerland. He looks straight ahead nervously. Opposite him, the president of the Federal Criminal Court, Jean-Luc Bacher, begins by asking him if he recognizes the accused, Alieu Kosiah, a former high-ranking member of the United Liberation Movement of Liberia for Democracy (ULIMO) rebel group. “Yes, I’m 100% sure it’s him. I recognized his bulging eyes. And when he shouted earlier this week, it reminded me of his reactions when he got angry during the war,” the witness said. During the week Kosiah, who has spent more than five years in detention, several times started shouting angrily as witnesses recounted his alleged abuses during the war. Each time, his outbursts led to an interruption of the hearing and forced the judge to move the accused to one end of the courtroom.

Day after day since the resumption of hearings on February 15, civilian victims have taken the stand to recount the crimes committed by ULIMO rebel forces during the first Liberian civil war, between 1989 and 1996. These testimonies are intended to challenge Kosiah’s defence. He denies having committed abuses and claims not to have been present at the scene at the time of the alleged crimes. Among the alleged crimes are numerous murders as well as the forced recruitment of civilians to transport materials or food. “They had our lives in their hands and we could die at any moment,” S. told the court. He said the soldiers were “arrogant”, behaving as if they “thought they were God”. These forced journeys often lasted about ten hours, without rest or food for these civilians treated like slaves. It was during one of these journeys that Kosiah allegedly shot two of S.’s uncles. Returning to this episode and the death of one of them in particular, Judge Bacher asked S. for more detail. “My uncle sat down and said he could not continue because he was exhausted. Chief Kosiah told him that if he didn’t move on, he was going to stay here. When my uncle didn’t get up, Kosiah shot him and continued on his way. Then the men around him started singing the ULIMO song,” said the survivor.

After the judge’s questioning, it was the turn of S.’s lawyer, Mr Wavre from NGO Civitas Maxima, to go back over the atrocities suffered by S. during these forced marches. There was notably an episode in which his client came across a fighter called Mami Wata – literally “mother of the waters”, a much-feared African aquatic deity – preparing a meal made from human hearts. “There were several hearts in a pot. Mami Wata explained to me that these hearts were for Commander Kosiah because they gave him courage and made him stronger.”

Returning to the death of one of S.’s uncles, the lawyer asked his client to sing the war hymn of the ULIMO forces. S. was suddenly overcome by emotion, bending double with tears running down his face and forcing the president of the court to order a recess. But he returned a few minutes later. “Even today I remember the sound of this war song,” S. told the court. “It makes me cry to think about it because my uncle died while it was being sung.”

Entitled Donlimo Suyé, this Mandingo song evokes the strength of the rebels who have become “lions” after taking up arms. It has been evoked many times during the testimonies. “You know what a lion can do to other animals in the jungle?” exclaimed S. “That’s how ULIMO soldiers saw themselves. When they sang that song, it was because they were about to kill people.”  Then it was the turn of Kosiah’s lawyer, Dimitri Gianoli. As after each witness testimony, he tried to show contradictions between S.’s testimony to the court and his statements to the public prosecutor in Bern in 2015, notably on the weapon used by Kosiah and the number of shots he allegedly fired. However, the Jura lawyer digressed a lot in his questioning, irritating Judge Bacher. “Your question has nothing to do with the indictment. Try to confine yourself to the facts of the case and not go into the war in Liberia as a whole!” the judge told him. “If you are going to plead the same way, we’ll be here for 25 hours!” The hearings were then postponed until the following day. 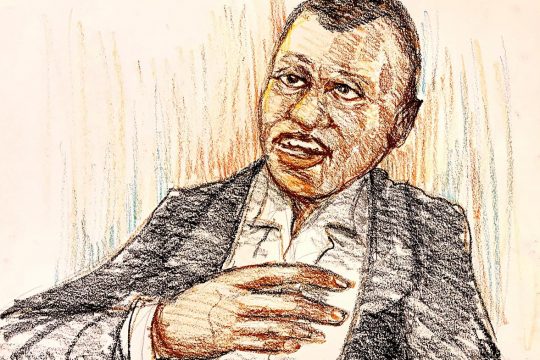 Kosiah: “You can jail me for a thousand years, I fear no one!”

On the morning of February 20, it was E.’s turn to testify. Wearing yellow Ralph Lauren jeans and polo shirt, E. is a maths teacher and wanted people to know it right away. “I’m a teacher, I only want to talk about what I’ve seen or heard and I’m not interested in hearsay,” he said. Speaking slowly and clearly, E. recounted how ULIMO established “Black Mondays”. These special days, which were also mentioned before the Truth and Reconciliation Commission in Liberia, saw hundreds of civilians executed for no apparent reason. “For me, Kosiah invented it. I remember hearing him once explain that no civilian should leave their house on Monday. That was true because a lot of civilians were killed that day,” said the witness.

Methodical and precise, E. added: “We are not talking about one or two Mondays, but about ten, between April and July 1994.” It was during one of them that the witness said he saw Kosiah’s men forcibly take a child from the neighbouring house where he was hiding with the rest of his family. “Kosiah was in a pickup truck with civilians in the back guarded by soldiers. When the child did not want to follow the soldiers, Kosiah got out of the vehicle. He asked him to get in. When the child refused, he shot him with his pistol before getting back in the car.”

Questioned by the judge on the colour of the vehicle, E. exclaimed: “Thank you for this question, Mr. Judge! It is the proof that God is listening to us! The pickup was the same colour as the jacket Alieu Kosiah is wearing today, army green.” Later in the day, E. said he remembered seeing the same vehicle drive through the village again, this time without civilians in the back and with the soldiers on board covered in blood.

“You tell me that you are well versed in numbers and very observant. Without turning around, can you tell me how many people are in this room?” asked the judge. After a brief hesitation, the mathematician answered: “This morning, when I came in, I counted 23 people.” After checking with the bailiff, the judge counted 22. One of the plaintiffs had returned to his hotel in the afternoon. Assistant judge Stephan Zenger concluded the week of hearings by questioning E. about his feelings towards the accused. “Since the beginning of the week, every time I see Alieu Kosiah I feel bad when I think of all the civilians who were killed. It’s not hate, just sadness,” he replied.

In new twist, Massaquoi trial to return to Liberia