It is 8 am and there’s already a buzz in the centre of Nkongolo Moshi village. Here are some young people, some women, and men talking. "We have come to attend the trial of Nsumbu, we are from the grouping of Sha Tshiakumba," explain the young people from this group of villages where Laurent Katende Nsumbu, a traditional chief, is accused of having committed atrocities in February 2017.

Near the Catholic priests' home where Nsumbu's trial has been held since March 10, the silence is disturbed only by a few lawyers discussing the country's political news. In another group of young people is Kande Kabue, who came to testify about the murder of his father, the chief of Sha Tshikumba, whom he says was killed by Nsumbu. "I have come to see the court convict Nsumbu," he says, certain of the verdict.

At 11 am, we are back on the sandy grass floor of the makeshift courtroom. A group of Nkongolo Moshi dignitaries sit on bamboo chairs. The judges sit under the small veranda of the priests' house, extended by a few tarpaulins to protect them from the sun. Villagers gather around the court. At noon sharp, Nsumbu arrives, but he is a different man from the first day. Still surrounded by security officers, the former militia leader looks weaker and more worried than six days ago.

Major José Ndembalungu, president of the military tribunal of the Kananga garrison, takes the floor to read the court's decision. The judgment covers over 120 handwritten pages, but the president summarizes for the population. "I want to take the important elements, because of the lack of time," he explains. "During the trial, the defendant denied all the charges against him, saying it was a conspiracy against his person. For this reason, the court, after a debate in camera, finds Nsumbu guilty on all charges and sentences him to life imprisonment for war crimes of murder, pillage, torture, destruction and hostage taking, terrorism and criminal conspiracy. It sentences him to 15 years of penal servitude for insurrection.  And the defendant is ordered to pay damages for the harm caused."

The court immediately orders the convict’s arrest. Nsumbu is handcuffed by elements of the Congolese forces, who take him away and put him in a jeep. The all-powerful leader has escaped the death penalty requested by the prosecutor, but he has been punished, say the young people who came to applaud the trial.

A warning to others

Kande Kabue is the first to react. He thanks God but also confides his fears. "I thank God that he had to pay for his actions; I lost my father and my brothers. Let the State come to our aid, we have lost everything. But I and my family have received threats from the brothers of Nsumbu and I fear reprisals."

The inhabitants of Nkongolo Moshi welcome the holding of this trial in their village. "It is a good lesson for those who disturb public order, they must make amends and respect the laws of the country. Young people of our village are warned. We welcome the judgment, it was really deserved. We never thought we would see this here in the village. This is a warning. Those who have weapons will be afraid to commit criminal acts", are some of the things we hear them say.

Saul Musawu, coordinator of the Free Consultation Office, an arm of the Bar Association that provides free legal assistance, expressed his satisfaction. "It was a very good debate, a fair trial, I thought the lawyers were up to the task. We ask that other trials still in the pre-trial phase be expedited," says the 30-year-old lawyer. 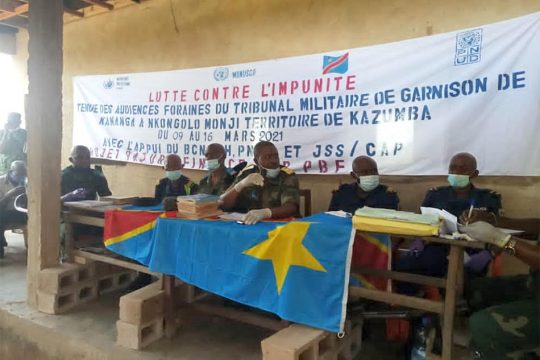 The victims’ lawyers are also satisfied, notably because the court also recognized the responsibility of the Congolese State and ordered it to pay damages. "We are very happy. We have taken a step forward in the fight against impunity,” says their president Dominique Kambala.  “We are satisfied with the compensation, but there should also have been other reparation as provided in the Rome Statute [treaty establishing the International Criminal Court], including medical, psychological and other care, given the trauma suffered by the victims."

The defence, of course, expresses regret. "The court did not develop a good argument, it went only on hearsay and not evidence. We will lodge an appeal,” says Nsumbu’s lawyer Freddy Kabangu.

The delegations then go quickly on their way, as it takes four or five hours to arrive in Kananga, the capital of Central Kasai province. Calm can then return to Nkongolo Moshi.