Kabuga, now detained in The Hague after his arrest nearly a year ago in France, imported shipments of machetes in the months leading up to the 1994 genocide against the Tutsis. This fact is verifiable and is not disputed by the accused. But what were these machetes used for? To cut grass in the fields or to kill Tutsis? Did the rich businessman import them as part of a plan to destroy the Tutsi ethnic group? In any case, this is the thesis that has long prevailed since Kabuga's indictment by the former International Criminal Tribunal for Rwanda (ICTR) in 1997, and which will probably remain entrenched in public belief.

It has, however, been gradually qualified over the years by successive prosecutors in this case. And now the accusation has been abandoned in the indictment newly amended by Belgian magistrate Serge Brammertz, prosecutor of the UN Mechanism that carries out the residual functions of the ICTR.

In an indictment dated August 22, 1998, Cameroonian Bernard Muna, then deputy prosecutor of the ICTR, stated: “As from 1992, Félicien Kabuga, through his company, ETS Kabuga, made massive purchases of machetes, hoes and other agricultural implements knowing that they would be used as weapons during the massacres.” The businessman was indicted together with seven other personalities from the National Republican Movement for Democracy and Development (MRND), the party of former president Juvenal Habyarimana. Four of them were tried and convicted by the ICTR. Former MRND secretary general Joseph Nzirorera died during the trial, former defence minister Augustin Bizimana died on the run, and former education minister André Rwamakuba was acquitted.

On October 1, 2004, Gambian ICTR prosecutor Hassan Bubacar Jallow made a slight change in the charges against the businessman, who became the subject of a separate indictment. “Félicien Kabuga ordered the employees of his company Kabuga ETS to import a record number of machetes into Rwanda in 1993. In April 1994 he ordered and instigated members of the Interahamwe, over whom he had effective control, to transport machetes and other weapons to Gisenyi and to distribute the machetes and other weapons to the Interahamwe in Gisenyi. The Interahamwe used machetes in Gisenyi between 7 April and 17 July 1994 to exterminate the ethnic Tutsi population, and by ordering and instigating the importation and distribution of machetes to the Interahamwe, Kabuga aided and abetted the killing carried out by these Interahamwe.”

In his April 2011 amended text, Jallow no longer drew such a clear conclusion about Kabuga's original intent. He simply wrote: “In April 1994, Félicien Kabuga instructed and prompted members of the Interahamwe which he controlled to transport machetes and other weapons to Gisenyi and to distribute them to the Interahamwe in Gisenyi on 3 and 7 April 1994. The said Interahamwe used these weapons and machetes in Gisenyi between 7 April and 17 July 1994 to exterminate and kill persons identified as Tutsis in Commune Rouge and other locations in Gisenyi Prefecture.” 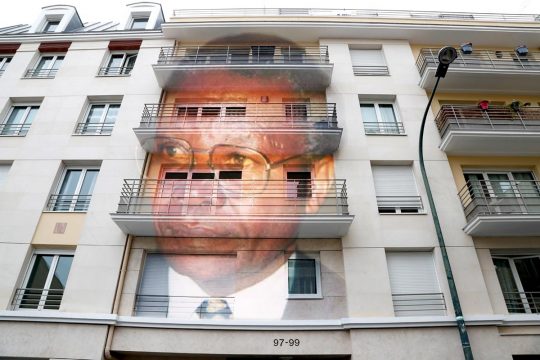 After more than 20 years on the run, Kabuga, whom the Rwandan public said was protected by the spirits of his ancestors, was arrested on May 16, 2020, in Paris. Immediately, the prosecutor of the Mechanism set out to update the case. "All the evidence that was used to have the arrest warrant confirmed and the indictment confirmed is very old. So we have to go back to the witnesses of the time, to see who is still available," Brammertz explained to Justice Info in September 2020. He said he had strengthened his team in Rwanda by transferring five of his staff and hiring five other "new prosecutors and investigators". Among them is Frenchwoman Aurélia Devos, a former magistrate at the Paris war crimes unit, where she acquired knowledge of the Rwandan case.

This work resulted in a new amended indictment, filed by Brammertz on January 15 and confirmed by the judges on February 24. The charge of importing machetes for genocidal purposes was definitively dropped, and only the transport and distribution of machetes in certain areas of the capital Kigali and in the prefectures of Gisenyi and Kibuye were maintained.

Similar machete orders by another company

Why was this point in the original indictment dropped when it had previously been considered a matter of public record? Brammertz's office did not wish to answer our questions. But American Stephen Rapp, former head of prosecutions at the ICTR, gave an explanation to Justice Info: “We had evidence of the massive order of machetes by Kabuga's company from China Machinery and of their delivery to Rwanda through Mombasa in 1993. The challenge always was in showing that these machetes were distributed to the killers and used in the genocide. There were similarly massive purchases by an unrelated company at the same time, and there was a large need for these 'tools' in the agriculture of Rwanda and Zaire”.

This is also what French sociologist André Guichaoua, an expert witness for the prosecutor in numerous cases at the ICTR, said in an article published on October 1, 2020. "Very quickly, the ICTR's research came up against the absence of tangible evidence," he wrote. “The archives from the ministries, including military expenditures, did not make it possible to establish the links (of Kabuga's imports) with the genocide. The 'machete thesis' was very uncertain. It was almost impossible to establish the direct and personal responsibility of the accused and to prove that the machetes were imported with the intention to kill.”

Unanimity is the law in Kigali. When questioned by Justice Info's correspondent in Kigali, Raissa Mucyo, advisor to the Rwandan Minister of Justice, refused to comment on "an ongoing case". The prosecutor's office and the National Commission for the Fight against Genocide also said they were awaiting the outcome of the trial. Jean-Damascène Karinda, legal advisor for Ibuka (the main genocide survivors' organization), agreed, saying "the prosecutor has the responsibility to bring to court the facts for which he hopes to find evidence at the time of the trial. So we have no problem with this indictment, given that Kabuga remains accused of genocide and crimes against humanity”.

Indeed, Kabuga still faces serious charges of conspiracy to commit genocide, genocide, direct and public incitement to commit genocide, persecution for political reasons, extermination and murder. As in the previous indictments, the prosecutor asserts that Kabuga is responsible for the content of incendiary broadcasts on Radio-Télévision des mille collines (RTLM), that he provided moral, logistical, material and financial support to the Interahamwe militia in the capital Kigali and in the prefectures of Gisenyi and Kibuye. He is accused of having put vehicles at the disposal of the Interahamwe to facilitate their movements during their murderous operations, of having distributed machetes and other weapons to them, of having given them money and food, of having congratulated the most zealous in the massacres and reprimanded the less active.

A "quick and efficient" strategy?

The new indictment, while narrow in scope, does not dwell on presenting the accused like previous indictments, but is full of details of Kabuga’s alleged crimes, suggesting that a large number of witnesses will be called to the stand. Abandoning earlier assertions that Kabuga exercised power, authority, and influence over all the military, the Interahamwe, other militias, armed civilians, and administrative authorities, prosecutor Brammertz is more specific than his predecessors about "the responsibility of the accused in RTLM and his multi-faceted support for the Interahamwe youth," Guichaoua points out. “Given the profile and age of the accused, this strategy is intended to be quick and efficient," he says. “It establishes the charges on the basis of crimes documented by direct witnesses, crimes whose gravity and scope justify an exemplary sentence. Twenty-five years after the events and given the multiplicity of the crimes identified, no defence lawyer will be able to find contrary evidence for the alleged facts on the ground amongst a population closely supervised by the authorities."

Speed has so far been relative. The opening of the trial is not expected before the last quarter of 2021, while in the meantime the health of the accused is deteriorating, according to his lawyer.