The first testimony was a historic plunge for the Truth, Justice and Reconciliation Commission (CVJR) into the early years of independent Mali. The fate of Fily Dabo Sissoko and Hamadoun Dicko, political opponents of Mali’s first president Modibo Keïta, and Kassoum Touré, an influential trader, were recounted by their children. Decades later, they and many other Malians still want the truth about the death sentences handed down against them on 1 October 1962 by a Bamako ‘people’s court’ in the trial of 91 people accused of ‘conspiracy’ and ‘anti-national activities’ for taking part in demonstrations against the creation of the Malian franc.

“We speak on behalf of these hundred vilified and humiliated families,” said Oumar Hamadoun Dicko, spokesman of the victims’ group. On 20 July 1962, a violent demonstration of shopkeepers broke out in Bamako demanding the release of Kassoum Touré, their leader detained by the police. Suspected of being the instigators of this movement, Fily Dabo Sissoko and Hamadoun Dicko were arrested by soldiers a few hours later in front of their family. “They broke everything in our house. They took us out of our rooms with rifle butts and arrested my father, whom we never saw again,” recalls Oumar, Hamadoun Dicko’s son.

The two political opponents and the shopkeeper were tried without the assistance of a lawyer, witnesses told the CVJR, and given a death sentence which was later commuted to hard labour for life. To serve their sentence, they were sent to one of the country’s most severe prisons in Kidal. They died there two years later, in 1964. The circumstances of their deaths are not clear. The government of the time said the prisoners died following an attack by an armed rebel group in the desert as they were being transferred. This version is refuted by their sons, who find it ‘convenient that only the prisoners were killed’, when they were accompanied by soldiers. They believe that it was actually a firing squad that shot their fathers.

And now, 57 years later, they are demanding the truth and answers.

Disappearances blamed on the army

As in the CVJR’s two previous public hearings on 5 December 2020 and 8 December 2019, the victims want answers, most often to questions addressed to the authorities. Of the eleven incidents on the programme for this hearing, six concerned cases of disappearances attributed to the Malian army.

“Why does an army that is supposed to protect the population commit such acts?” asked Ousmane Macinanke, whose father was abducted by soldiers in 2013 in Kona, near Mopti, central Mali. “He was the pillar of the family, we don’t know anything about what happened to him or why. Let them tell us if he is alive or dead, and if he is, let them show us his grave so that we can finally mourn him,” said the 41-year-old jeweller, who could not contain his tears as he told his story. By evoking these abuses, the victims have reopened wounds that are sometimes more than 50 years old. “These hearings are not intended to stir things up, but rather to allow the families to share their pain with the entire Malian people,” said the president of the CVJR.

When her turn comes to testify Fatoumata Traoré says her only hope is to find her husband alive and be a family with their daughter, born three days after his abduction. In 2015, when she was only 16 years old, her husband and five other men were abducted by elements of the National Movement for the Liberation of Azawad (MNLA), an armed group that signed the 2015 peace agreement. As there was no news, all the wives remarried except Fatoumata Traoré. She remains hopeful, but her research has so far proven fruitless, and all her questions unanswered. She now survives by selling food. At the end of her testimony, she asked for help so that she and her daughter can lead a decent life and urged the CVJR to “do everything possible” to find her husband. “We thank her, we have taken note of her requests, her recommendations and her words. We will report on it,” replied the Commission President in his formal tone.

“I wish the Commission would fight”

These hearings, limited in number of testimonies and spaced out in time, have for some witnesses a taste of too little.

Bassirou Camara, one of the older brothers of Abdoul Karim Camara, a student leader who died – depending on the accounts, which differ – under police or military torture in 1980 and whose grave has never been indicated to his family, challenged the president of the CVJR: “The victims speak, full stop. It should not be limited to that. If I come here to say I forgive, it is because I have no other alternative, there is no confrontation with the perpetrators. I wish the CVJR would fight to tell us where our brother’s grave is. The credo should be victims speak, the CVJR acts.” “The CVJR does not have a judicial mandate and therefore cannot carry out confrontations,” replied the president of the commission, Ousmane Oumarou Sidibé, assuring that “everything will be in the final report”.

“We support and appreciate the approach, but Mali is a country of reports and opinions that are lie sleeping. I hope that your work will not be in vain,” Camara retorted, adding that “if we do nothing against injustice, Mali will be nothing”.

The CVJR has three more public hearings to hold before its mandate ends in December 2021. 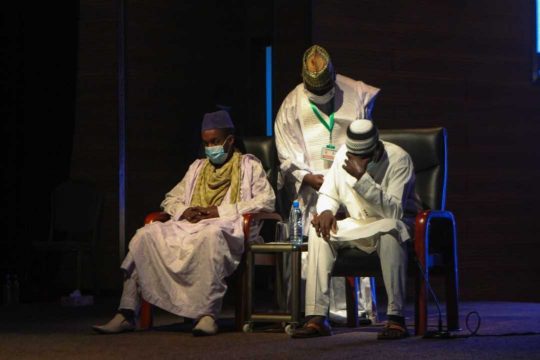 Mali: these crimes that can never be tried
Most read