Although 22 years have passed, Rute Zuniga will never forget the morning of February 10, 1999. Zuniga had given birth the previous month to a baby girl, her fourth child. She was called to the local health clinic with the ruse that she and her child required a vaccine. But instead, she was given anesthesia and when she woke up at the clinic, she realized something else had happened. She had been sterilized without her consent. “I had no idea what was going on at first. They told me that I had fainted, but that was a lie. I later understood that I had been given a tubal ligation,” she said.

Zuniga was not alone – not by a long shot. Hundreds of thousands women and men were sterilized in Peru between 1996 and 2000 as part of a government family planning program. According to court records, approximately 300,000 women received tubal ligations, while 22,000 men were given vasectomies.

Nearly a quarter century later, Peru’s judiciary is expected to decide this April if it will open a trial against the president at the time, Alberto Fujimori (1990-2000), who is already in prison on a different human rights case, and three of his health ministers because of the sterilization program. The state’s prosecutor wants Judge Rafael Martínez to order Fujimori to stand trial as the indirect perpetrator on two counts, serious injury leading to death and serious injury leading to human rights violations. The prosecutor, Pablo Espinoza, maintains that the Fujimori government inflicted bodily harm and death on women and men in rural areas and urban shantytowns in a deliberate strategy targeting the poor with sterilization.

“This is an historic moment. After decades in limbo, there will finally be a decision. We believe there will be justice and that the judge will agree a trial is warranted,” said María Esther Mogollón, a professor and women’s rights activist who has been an advocate for the victims since the 1990s. The defense argues that the family planning program did not coerce anyone and that if excesses were committed, which they say were few if any, they happened because of over-zealous health care workers wanting to please immediate supervisors, not ministers or the president.

A Commitment to the Inter-American Commission

The first legal action came in 1999, when the case of María Mamérita Mestanza was presented to the Inter-American Commission on Human Rights. Mestanza was pressured into a tubal ligation in late March 1998. She received no post-op medical attention and died of an infection a week later. An agreement in the Mestanza case was reached in 2001, but the Peruvian state failed to comply with its commitment, particularly the need to conduct an exhaustive investigation and bring criminal charges against the people responsible.

Instead, a long, painful process started for the victims. The judiciary started and stopped investigation four times until 2011, when it was ruled a human rights case that could not be closed. Then it sat dormant until 2018, when prosecutors began preparing the ground to present the first of three cases to a judge.

The first case, involving 1,306 people, made it before Judge Martínez in January. It includes five women who died from tubal ligations and 1,301 who were sterilized against their will.  It has taken longer than expected because of the complexity, the coronavirus pandemic and, according to Mogollón, “a few inexcusable mistakes”. The hearings to decide on the fate of the case were postponed in January and again in March because of a lack of translators. A number of plaintiffs speak Quechua, Peru’s largest indigenous language.

Most complex case in the country’s history

It is the most complex case in the country’s history because of the number of plaintiffs and where they are located, and the conditions of the potential defendants, particularly Fujimori. “This is an unprecedented case. We have never had a case with so many victims and in so many areas,” said Sigfredo Florián, an attorney with the Legal Defense Institute who is representing some of the victims.

The only other case of this magnitude involved the murder of students and professors by the security forces at the public Universidad Nacional del Centro in the highland city of Huancayo. The case involved 74 victims. The case took seven years and eight months from when it was opened to a not guilty verdict in 2010 for the police officers who stood trial.

This trial would have infinitely more plaintiffs. There are victims from the northern department of Cajamarca, where Mestanza died, down to Cusco, in the south where Zuniga leads the Association of Peruvian Women Affected by Forced Sterilization (AMPAEF). The majority of the victims speak Spanish, but some speak Quechua and some speak Amazonian indigenous languages, such as Ashaninka and Shipibo.

“The court is in Lima, but the victims are all around the country. The judge will have to travel to investigate where the crimes occurred. This is complicated, but not even the most complicated part,” said Florián.

If the judge agrees the case merits a trial, a major complication is former President Fujimori’s status. Fujimori, 82, governed Peru with an iron hand for ten years, until the massive corruption in his government caught up with him and he fled for Japan, his family’s home country, in November 2000. He tried to resign by fax, but Congress impeached him.

Instead of staying in Japan, Fujimori attempted to secretly enter Peru from neighboring Chile in 2005, but was detained. Peru filed to have Fujimori sent home to stand trial in corruption and human rights cases and the Chileans agreed, extraditing him in 2007. He was found guilty in a human rights case in 2009 and sentenced to 25 years in prison.

The tricky part could be the extradition from Chile. Based on international law, Fujimori can only be tried for the crimes for which he was extradited. Each new case requires Peru to file a request to expand the extradition that the Chilean Supreme Court must approve, even though he is already in Peru and already in prison. And a new extradition approval could be even more complicated because of Fujimori’s age and his health. He has been hospitalized often for a host of illnesses, most only minor so far.

A new chance for a pardon for Fujimori?

Politics could also get in the way. Former President Pedro Pablo Kuczynski (2016-2018) tried to hang on to power by making a deal with Fujimori’s son, then-Congressman Kenji Fujimori. The congressman and several of his followers voted against impeaching Kuczynski in December 2017. Kuczynski then pardoned Alberto Fujimori, using health as a reason. But Kuczynski was forced to resign and the pardon, which was unlawful based on human rights treaties signed by Peru, was revoked. Fujimori went back to prison in January 2019.

His case returned to the political debate this year, when his daughter, Keiko Fujimori, pledged to pardon him if elected. This month, she made her third run for the presidency. She lost in 2011 because of her ties to her father’s regime, and again in 2016, even though she moved away from him in that race. This time, she made his legacy, her legacy and promised a return to his policies. Despite her own legal troubles – she has been imprisoned three times in pre-trial detention in an asset laundering case – the strategy worked and she will take part in a June runoff and potentially become Peru’s first woman president on inauguration day July 28, 2021.

Despite the delays and setbacks, and the political mess, the victims and their advocates remain hopeful. Zuniga, at home in Cusco awaiting for the judge’s decision, said she is hopeful that justice will be served. “These people are always finding a way to stall, but I want to believe that justice will come. We’ve been waiting so long,” she said.

Copy this HTML into your CMS
Press Ctrl-C to copy
Peru : Related articles

A Practitioners' Perspective on Forms of Justice in Peru and Colombia 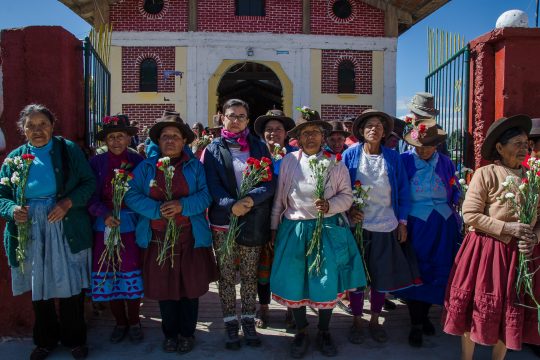