Sri Lanka’s new unity government is promising accountability for war crimes, although it has stopped short of accepting an international inquiry. President Maithripala Sirisena, who replaced his hawkish predecessor Mahinda Rajapakse in January, has also promised to make reconciliation a priority.

Sri Lanka, a former British colony, is still scarred by 25 years of violence and conflict arising from tensions between the majority, mostly Buddhist Sinhalese and the minority, mostly Hindu Tamils in the northeast of the country.

The civil war ended in May 2009 when government forces under President Rajapakse seized the last Tamil-held land. International concern was raised especially about the fate of civilians caught up in the conflict zone in the final stages of the war, the confinement of some 250,000 Tamil refugees to camps for months afterwards, and allegations that the government ordered the execution of captured or surrendering rebels.

Kate Cronin-Furman is a Postdoctoral Fellow in Law and International Security at Stanford University in the United States, and has researched the politics of accountability in Sri Lanka. She spoke to JusticeInfo.Net.

JusticeInfo.Net: The new unity government is promising reconciliation measures, including war crimes trials. It is also looking into setting up a truth commission and reparations for victims. But the war ended six years ago, so why do you think it has taken so long?

Kate Cronin-Furman: This is actually much quicker than we might have expected to see real movement on accountability. Transitional justice was an impossibility under the Rajapaksa regime, which was responsible for the final phase of the war and derived its support from the Sinhalese community. It also had close ties both to the military and to militant Sinhala-Buddhist nationalists. The new government, by contrast, has a more diverse power base, but must walk a careful line between delivering on their promises to the minority communities that helped bring them to power, and the Sinhalese, who because of the island's demographics, still make up the majority of their supporters.

JusticeInfo.Net: Do you think the government will really do what it says with regard to justice and reconciliation?

KCF: I believe that there are members of the current government who genuinely want to move forward on transitional justice. However, they're in a difficult position given the views of their constituency, and may find it hard to deliver on all of their promises. True justice and reconciliation will require a major shift in public opinion among the majority Sinhalese. This is likely to be a long, slow process.

KCF: At the moment, Sri Lanka does not have the substantive or procedural law in place to prosecute international crimes. Any domestic inquiry will therefore require significant international assistance to be credible. That said, Sri Lanka does have a well-functioning and professionalized justice system, so is in a much better position than many other post-conflict societies embarking upon a transitional justice process.

JusticeInfo.Net: Would a domestic inquiry be acceptable to the Tamil community?

KCF: There are strong concerns among the Tamil population about whether a domestic inquiry can deliver justice, given the history of abuse at the hands of the state. Many in the victim community, and in the diaspora, feel strongly that an international role is necessary in order for victims and witnesses to feel safe testifying before such a body.

JusticeInfo.Net: It seems the US is willing to support a domestic inquiry. Why do you think it has adopted this position?

KCF: Relations between Sri Lanka and the US have improved significantly since the presidential election that brought Sirisena to power. This has meant a move from a hardline approach to human rights towards giving the new government time and space to make gradual improvements. But it's actually been a bit difficult to say exactly what US policy on transitional justice is. The latest is that the draft UN Human Rights Council resolution put forward by the US called for a substantial international role in the inquiry.

JusticeInfo.Net: The recent UN report found strong indications that war crimes and crimes against humanity were committed by both sides in the conflict. Do you think both sides are now ready to face up to their past?

KCF: Recent months have seen more reflection, on both sides, regarding the violations committed during the war. However, the rhetoric still remains very polarized, and there's a long way to go in terms of an honest reckoning with the past.  To sum up: The recent moves by the Sri Lankan government simultaneously represent surprising progress on transitional justice and underscore the challenges for true accountability and reconciliation. 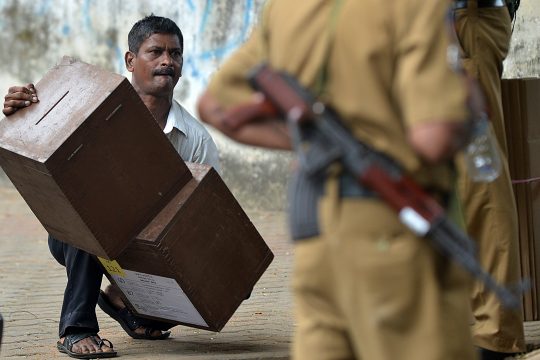